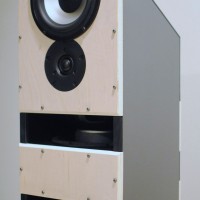 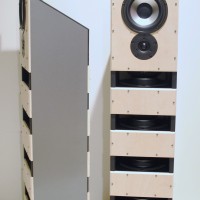 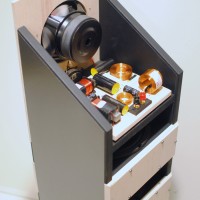 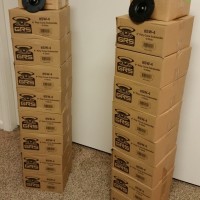 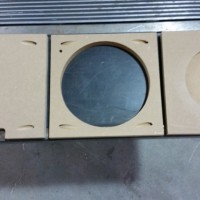 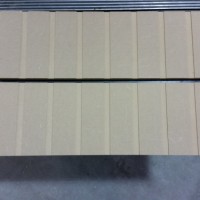 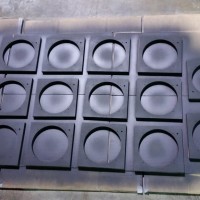 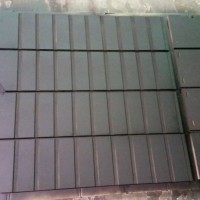 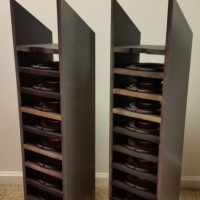 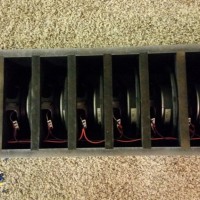 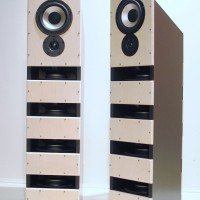 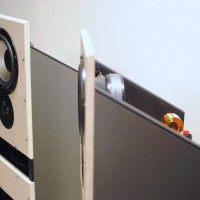 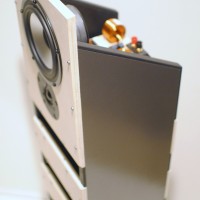 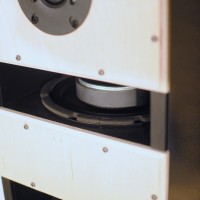 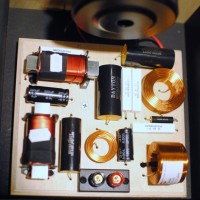 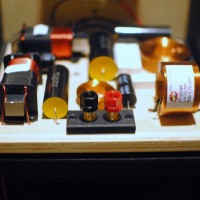 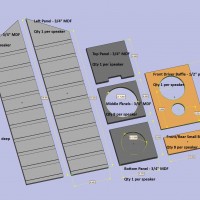 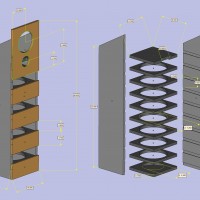 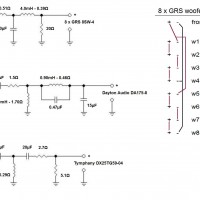 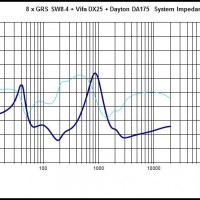 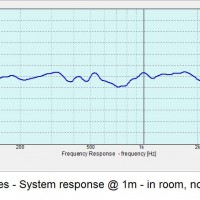 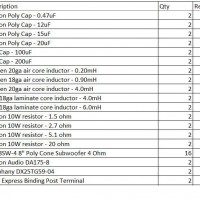 Project Description
The Hurricanes are a multi-woofer open baffle 3-way tower speaker with a non-traditional woofer mounting strategy that results in as much bass radiating area as two 15″ woofers packed into an average sized tower speaker.

Design Goals
In the last few years, I have heard some great open baffle speakers and have been particularly impressed with the bass from these speakers, considering the limitations of the open baffle format. Inevitably, the speakers housed at least one, but usually two, giant woofers on a giant baffle, which would not be a reasonable compromise in my smallish listening room. I wanted to see if I could squeeze all the open baffle goodness I was hearing into a more traditional sized/shaped speaker.

Driver Selection
As it turned out, I had a lot more leeway in driver selection than I initially thought due to the surprise advantages of the slot loading. At the time however, I chose the driver I did as follows.

The woofer was the trickiest choice because it needed to fulfill a lot of potentially conflicting criteria. Ideally, it would have a high Qts, low Fs, high Vas, large Xmax, and, most importantly because I would need 16 of them, low cost. The best fit that I found was the GRS 8SW-4, which nailed the cost component, did pretty good with Qts and Xmax, and not great with Fs and Vas – overall a very good compromise to try this format.

The Dayton DA175-8 was chosen for the midrange due to its proven performance and relatively high Qts/Fs ratio.

The Tymphany DX25 tweeter was chosen for its low Fs to give me some freedom in crossover point if the dipole peak on the midrange proved to be challenging.

The price point for the mid and tweeter was in line with the woofer choice as well.

Enclosure Design
The idea with this design was to mount woofers cone-to-magnet, stacked vertically, with adjacent pairs wired out of phase to compress the air in small slots, which are exposed alternately to the front and back of the speaker. I realize that’s a mouthful, but looking at the picture will help. Basically all the slots on the front will compress the air at the same time while the slots on the back rarefy the air, effectively the same as a traditional open baffle speaker would do. In order to maintain a good overall size, I decided on 8 woofers mounted as close together as possible. This means that the magnet from one speaker is actually well within the cone cavity of the next woofer.

The midrange is operating in free air as well, but mounted in a more traditional way. The tweeter was mounted below the midrange in order to keep the overall height to around 40″. This arrangement allowed me to make use of the space in the top woofer slot.

The tweeter is flush mounted, but I chose to surface mount the midrange and slightly overlap the tweeter flange. This was mostly for aesthetic purposes, but it does allow for decreased CTC distance and decreased height as well.

I chose 3/4″ MDF for the sides, top, bottom, and middle panels for cost and ease of painting. Front and back panels are 1/2″ birch plywood because it looks cool.

Since there is no “inside” to this speaker, I decided to make the crossover a feature and mount it on a piece of 3/4″ plywood on the top panel behind the midrange. All soldering was done on the backside of the plywood board for a cleaner look.

Enclosure Assembly
One of the challenges of this enclosure is that the woofers are completely inaccessible once assembled. If a woofer blows or someone sticks a finger through the surround, there’s no replacing it without taking the whole thing apart. With that said, I decided that I would not glue any of the panels together to retain access, albeit inconvenient access, to my woofers. So I drilled pocket holes on the bottom of all the horizontal panels and screwed them in place once set in the dado slots. Keep in mind, screwing them together can only be done after the panels are painted and the woofers mounted!! I used a grey hammered finish paint on the outside of the side panels and flat black on the horizontal panels and the inside of the side panels. After the side panels are screwed to the horizontal panels, the rest is easy.

The front driver panel and all the small slot covering baffles are screwed into place with semi-decorative screws. Once all the panels were screwed together, I glued pine trim strips painted black on all the exposed MDF edges, which really cleaned up the look.

Crossover Design
There is nothing extraordinary about the crossover, except that passive networks are usually more difficult with open baffle systems. I think I got lucky, however because that did not seem to be the case with this system. The in-room measurements I took were very well behaved and the drivers quickly fell into 4th order acoustic rolloffs, crossing at 250Hz and 1800Hz.

I will say, my first go-round crossed the woofers and midrange at 400Hz with a very smooth measured response, but something was off during listening tests. I believe the resonance from the woofer slot loading was causing some issues in this region that I couldn’t see in the measurements. Moving the crossover point down to 250Hz cleared things up substantially.

Also, the dip near 700Hz is real, but relatively narrow band, and getting rid of it introduced more noticeable problems. It was not audible to me in listening tests.

Conclusion
This experiment was a resounding success! Every aspect I was unsure of turned out much better than expected. The Hurricanes are a capable open baffle system in a 10″ x 10″ footprint. The frequency response measurement shown is in-room and ungated, showing an F3 down near 45Hz and very well behaved low frequency performance. The drivers are value drivers and they sound like well implemented value drivers, BUT they also have that open-baffle magic! Vocals and acoustic bass are open and airy without the usual boxy constrictions of monopoles.

The slot loading actually improved the desired specs for open baffle bass, moving an average Qts from 1.05 to 1.35 when mounted and an average Fs from 65Hz to 48Hz when mounted. The Dayton DA175 had no problem reaching below the slot resonance to allow the woofers to roll off before they became an issue.

Tips & Tricks
1) Think the construction steps through before proceeding – this enclosure cannot be assembled independently of the woofers.

2) Test the length of the pocket screws first to make sure they don’t disrupt the finish on the outside of the side panels. I ended up using standard 1.25″ drywall screws because they were a hair shorter than the pocket screws that came in the kit, but you should test first before committing.

3) If you want to mount the crossover components on a 3/4″ board as I did, pre-solder some lead extensions to the resistors so they can be accessed on the back of the board.

4) Mistakes can be made easily when wiring the woofers and not so easily discerned due to the nature of the speaker format. Follow the diagram closely.

About the Designer
I have been building speakers for over 20 years and am a member of the Parts Express Speaker Design Team.