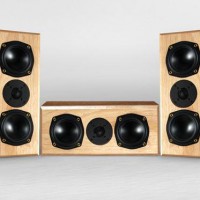 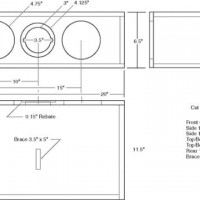 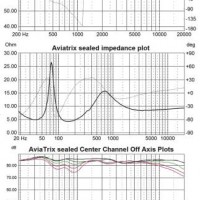 Driver Selection
Shortly before this design was envisioned, Parts Express had come out with several new drivers. Among them was the RS28F-4 (#275-140). This tweeter is the soft dome version of the popular RS28A aluminum dome. This is a very impressive tweeter at any price, (let alone the entry price of a paltry C-note for a pair.) The RS28F-4 offers near class leading performance, and some of the lowest crossover capabilities of any tweeter. This low frequency performance significantly improves the center channel horizontal off axis response compared to a typical commercial design. The ND140-8 (#290-218) proves the old axiom “You can’t tell a book by its cover.” The stamped steel frame of this aluminum-coned neodymium motored driver belies its abilities as a fine sounding and very capable midwoofer. Its relatively high Qt can be used to good effect in both the sealed and transmission line designs, and provides more bass extension than would otherwise be expected from a 5.25″ midwoofer. The absence of a dust cap provides a smooth and elegant look. Another useful attribute is its claimed Xlim of 20 mm, which is about 3 to 4 times more than most 5.25″ drivers. I did no independent testing of the Xlim, but the driver appears to be more than capable of providing quite high SPLs with no audible or mechanical issues.

Enclosure Design
As previously mentioned, the AviaTrix was developed in two enclosures. The floor standing version is a mass loaded transmission line. The sealed version, while it was not the first design built, was conceived from the beginning to be the home theater workhorse. The 6.5″ x 20″ x 11.5″ deep enclosure was specifically designed to be as compact and narrow as possible, to optimize its use as a center channel speaker. The crossover was also designed for the speaker’s use in a horizontal orientation, as well as a vertical orientation, making the system appropriate for home theater use as mains, center, and of course surround duties. While the enclosure provides a Qtc of approximately 1.1, capacitive loading of the midwoofers allows the system to emulate a lower Q transfer function, and lower the f3 by nearly 15 Hz as well. Even though the transfer function ultimately reaches 18 dB per octave, the f10 has not been compromised, and is still roughly 40 Hz. A conventional sealed alignment with a Qtc of 0.7 would require an enclosure four times larger, yet would still have an f10 of around 40 Hz. The modeled low end extension in each case assumes the speakers are well out into the room. Their low end extension and their sensitivity both increase as they are moved closer to the front walls.

Amplifier/Crossover Configuration
Again, due to the high Qts of the ND140, a pair would normally require a large enclosure, about 100 liters, to provide a Qtc of 0.7, with an f3 of roughly 80 Hz. I took advantage of the high Qtc of about 0.9 in the 15 liter box and capacitively loaded the ND140 drivers with 1000 uF. This reduced the response peak and consequently lowered the relative f3 of the system. Modeled f3 is 60 Hz, and f6 is 50 Hz. Due to the capacitor, the low end response ultimately rolls off at 18 dB per octave, instead of 12 dB per octave. The lowpass network consists of the large 1000 uF cap, along with the more traditional 2nd order electrical filter functioning as a 3rd order acoustic filter with a crossover frequency of 1000 Hz. The highpass is also a 2nd order electrical filter, and summed with the response of the tweeter provides a 4th order acoustic response at 1000 Hz. The drivers sum in near phase quadrature. The completed speaker system will present a 6 ohm nominal impedance. Center channel usage: The crossover for this design was optimized for use as a center channel. When orientated horizontally, the modeled horizontal off axis response at all frequencies stays within +/- 2 dB up to 30 degrees off axis. While the worst case off axis response is around the crossover frequency, and is -7 dB down at 45 degrees off axis, all other frequencies stay within 3 dB of nominal at 45 degrees. At the more normal seating positions of +/- 15 degrees off axis, the variation at all frequencies is about 1 dB. Baffle step adjustment: A parallel pair of resistors in series with the tweeter network provides the necessary attenuation. The value of one or both of these resistors can be changed to suit the room positioning. For near wall mounting I suggest a 10 ohm and a 12.5 ohm in parallel. For more traditional speaker placement, i.e. further out into the room, or if used for stereo music reproduction, I suggest using 12.5 ohms for both resistors. I didn’t experiment with in wall, but perhaps using a pair of 10 ohm resistors may be appropriate. Some experimentation may be necessary to find the best solution for a specific room position and acoustic signature.

Enclosure Assembly
This is a very compact and easy speaker to build, since it is of butt joint construction, and only the tweeter flange needs to be flush mounted. The 6.5″ x 20″ front baffle external dimensions and an external enclosure depth of 11.5″ facilitate placement in rooms of almost any size. A single brace is specified to reduce the wall resonance and support the weight of a monitor-should one be placed directly on the AviaTrix center channel. The flattest L/R mains response was with the speakers orientated orthogonally with the room, only toed in slightly. For center applications, the speaker should be mounted slightly above or below the screen or monitor. 3/4″ MDF is specified for the enclosure. I stuffed each speaker with about 8 oz. of acousta-stuff, so figure one bag per pair of speakers. The crossover can be mounted easily on the top or bottom panel (assuming a vertical orientation) and presuming the crossover board is no wider than 4.5″, can be removed and reinstalled through the woofer cutout. If you want to trade a little extra baffle width for a reduced enclosure depth, external dimensions of 7.5″ x 20″ x 10″ are also acceptable with no crossover change.

Conclusion
I’ve quite enjoyed having these in my listening room, and feel we have been successful in our goals. Recognition should go to Wayne for the gorgeous enclosures and crossover voicing, as well as numerous collaborations in the general designs. While the AviaTrix can’t quite keep up with my reference speakers, they come very close, and are quite listenable for extended periods of time with no fatigue. They are very clean and articulate, with surprisingly low bass for a 5″ MTM design, especially in the MLTL configuration. Where some speakers can come off sounding a bit rough around the edges (especially when pushed) the AviaTrix remains smooth and ethereal, demonstrating its low distortion levels. Those that prefer the full, lush sound of paper driver woofers may find the bass and lower midrange a little too clean and articulate for their tastes, but I think many will find the sound quite enjoyable. Extended listening sessions, some at high SPLs, have not resulted in any fatigue.