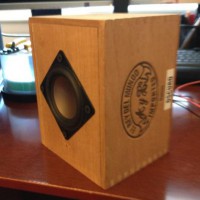 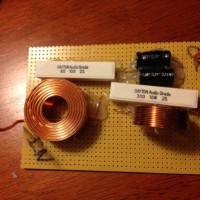 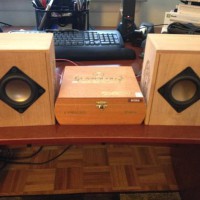 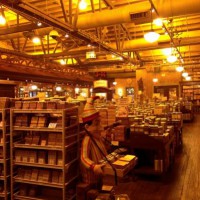 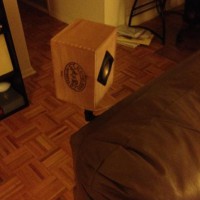 Driver Selection
I was looking at several small drivers to make this work. I used the 2.5” Dayton ND65’s in a portable boom box project and really liked the way they sounded but wanted a little more output from these. After reading the small driver shootout on Zaph’s site I decided to go with a proven (and well reviewed) design and build these using the B3S and his crossover design. The B3S’s have a great golden color that matches perfectly with the cigar box wood and looks unique.

Enclosure Design
As mentioned earlier the main goal of this design was to use a cigar box for the enclosure. Zaph’s design calls for a small sealed box, the volume of which is flexible since the speaker doesn’t really play below 120hz. There’s a huge J&R Cigar store near my house that sells empty cigar boxes for $2. I took a ride down there, smoked a cigar in the massive store/humidor and browsed through the pile of boxes. I found a small box with a sliding front and there happen to be two matching ones, brilliant! It might be the cheapest speaker box I’ve ever used but it has incredible character.

Amplifier/Crossover Configuration
My original plan was to use these with my cigar box amp based on the Sure TDA7492 board. Because the speaker is 8 ohms it would only be getting about 20-25 watts per channel from that amp which is just right. I ran this combo for a while in the bedroom and it was very nice. It’s now hooked up to the rear channels of my HT Receiver which is rated at 100 watts but the rears will never see half that much, and with the built-in high-pass crossover they’re safe. Being a single driver you might be asking, why do you need a crossover? Well it’s more of a contour network than a crossover per se. It provides BSC (Baffle Step Compensation) and a notch filter. The BSC lowers the midrange and boosts the lows to compensate for how sound radiates in 4pi space. The notch filter smoothes out some cone breakup in the higher frequencies allowing the speaker to be used without a tweeter. When making the crossover, some of the exact values don’t exist in the wild and must be custom made. For the .08mh inductor the easiest way is to pick up a cheap RCL meter, get the next value up (.1), then unwind until you’re spot on. To get the 4.3uF capacitor just put a 3.3uF and 1uF in parallel. For the details on crossover assembly search on his site zaphaudio dot com for the B3S project.

Enclosure Assembly
Assembling the enclosure was pretty straight forward since it was already a box 🙂 I used some basic hole saws to cut the holes for the terminal cups and speakers themselves. I lined the inside of the box with just some egg-crate foam from PE. I got the crossover and everything into the box and brought the wires out the speaker hole first. Then I glued the sliding front panel into place with some liquid nails to make a good seal and finally mounted the speaker into its hole on the front.

Conclusion
I am extremely pleased with how well these speakers turned out and plan to build more of them. If you understand their limitations and use them within their limits they sound great. These are not bass-boxes so don’t ask them to play low but for a small speaker they sound better than any HTIB you’ll find in the local bigbox store. If you’re looking a decent 5.1 DIY setup I would recommend these drivers and crossovers with PE’s new birch knock-down mini cube enclosures, unless you’re lucky enough to find 5 matching cigar boxes that is! What to build next? Maybe a humidor sub-woofer?

About The Designer
I am an IT professional by day but have my degree in communications and studied audio engineering and broadcasting. I enjoy building computers, speakers, and car stereos. I’m less of musician these days and more of a music listener but I’m still very passionate about sound quality and am described as an audiophile by my peers. I have champagne taste and a beer budget so I like high-value (not necessarily high cost) builds and trying to get the most out of my gear.