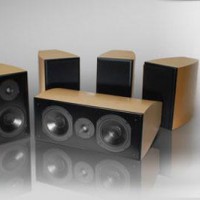 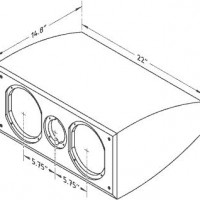 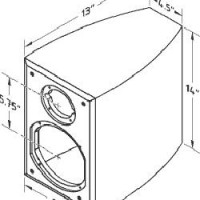 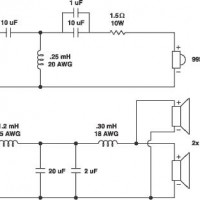 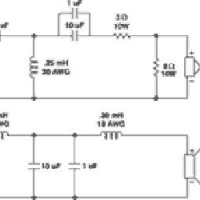 Enclosure Design
Every listening environment is different. Every budget is different. With these factors in mind, maximum flexibility was a big part of the design equation. While many elements are common to both systems, such as the drivers, crossover points, and non-vented enclosures, Dr. D’Appolito decided to create two different configurations: a larger MTM (midbass/tweeter/midbass) and a more compact MT (midbass/tweeter). The four ohm MTM’s internal volume measures 1.0 cu. ft. and its eight ohm MT sibling is a mere 0.5 cu. ft. The diminutive MT versions excel as surrounds or as the main L/R speakers in moderately sized rooms. The single woofer’s response can reach down to around 50 – 60 Hz, which is not too bad at all! For realistic home theater use, or as part of a music playback setup, the MT can also be used with a subwoofer to create a big, big “full range” sound. Thanks to the smooth, gentle sealed-box roll off, a THX-recommended low-frequency crossover of 80 Hz is easy to implement if required. For bigger rooms (and budgets), the MTMs have you covered: music, home theater L/R, and center channel. The 1.0 cu. ft. enclosure and dual Usher woofers deliver bass that will satisfy the most critical hi-fi requirement. You could even build the ultimate 7.1 by using these speakers in all positions and then adding a subwoofer. Dr. D’Appolito’s careful integration of components ensures excellent dispersion and exceptionally smooth off-axis response in both the horizontal and vertical planes. Lay these versatile speakers on their sides for HT center channel applications or stand them up vertically for all other uses. There is a reason many people refer to the MTM design as a “D’Appolito”-the man defined it! The Doctor knows how to extract the most out of this driver configuration.

Amplifier/Crossover Configuration
Thanks to Dr. D’Appolito’s efforts, the MTM provides smooth, controlled horizontal dispersion, even when the enclosure is positioned on its side for center channel duty. Destructive interference between the two woofer drivers is minimal, with some narrowing at 1 kHz that is not likely to intrude into a listener’s perception of dialogue or similar program material. At the same time, “spill” onto the ceiling or floor is minimized by the MTM’s trademark linear coverage in the plane that would be horizontal when the speaker is deployed “normally.” The MT exhibits well-behaved and consistent coverage both horizontally and vertically. A 2 kHz crossover point, the same for both the MT and MTM designs, contributes to the excellent transition between the Usher woofer and tweeter. Note: MT: The 2.5 mH inductance value is obtained by removing eight turns from a 2.7 mH coil.

Enclosure Assembly
The MT and MTM can be constructed using Dayton Audio’s pre-made enclosures, which are available in gloss black, maple, and cherry finishes. The newer curved-sided version is particularly attractive, and its gracefully arced side panels further reduce resonances and diffraction. Although you may choose to build your own speaker cabinet for this project, it’s hard to beat Dayton Audio’s rock-solid construction, furniturequality finishes, and flexible “B-REX” removable baffle system. Holes must be cut for the woofer(s), tweeter, and input (unless knock-in style binding posts are used). Use of a circle jig and plunge router is highly recommended, especially to flush mount the drivers into the conveniently removable B-REX baffle. There is not a lot of surface area surrounding the woofer cutout, especially so for the MT, so use extra care when routing. The sealed-box alignment eliminates the extra step of cutting and installing vents. The MT should be loosely stuffed with six to eight ounces of fill material; the MTM requires approximately double that amount.

Conclusion
If you can’t feel good about owning high-performance loudspeakers unless you pay a bill equal to extensive orthodontia or the restoration of a classic British sports car, you should ignore the Usher UA711 (MT) and UA721 (MTM) and concentrate on finding that second-shift moonlighting job you’ll need to make ends meet. On the other hand, if your entertainment budget is modest but you’d still like to partner with great speaker components and a top designer, this project could be exactly what you require. Any combination of these designs could be used to create an awesome 5.1 or 7.1 home theater system. Large room, large wallet; go with five or seven MTMs and a sub. Not such a large wallet, use three MTMs, two or four MTs, and a sub. Smaller room and wallet? Use one MTM (center channel), four or six MTs, and a sub. Either box confi guration-the effi cient, high-impact MTM, or the petite, less-bassy MT-will offer impressive music playback performance that will complement almost any hi-fi system. Dr. Joseph D’Appolito’s commitment to the truth and accuracy of audio reproduction has passed into industry legend. As a consultant to leading speaker manufacturers, his designs have been implemented in premium loudspeaker systems that command premium prices. With a few hours of work, you can enjoy the same benefits-without spending yourself into poverty

About The Designer
Dr. Joseph D’Appolito is a world-renowned authority on audio and acoustics, specializing in loudspeaker system design. Dr. D’Appolito holds BEE, SMEE, EE, and Ph.D. degrees from RPI, MIT, and the University of Massachusetts. As a member of the Audio Engineering Society, Dr. D’Appolito has published over thirty journal and conference papers. His most popular and influential brainchild, however, has to be the MTM loudspeaker, commonly known as the “D’Appolito Configuration,” which is now used by dozens of manufacturers and countless DIYers throughout the world.