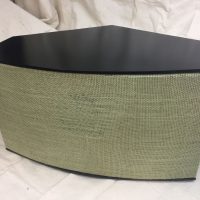 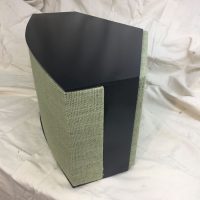 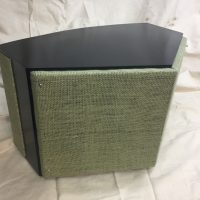 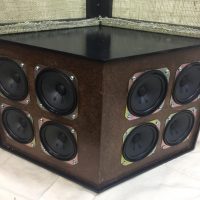 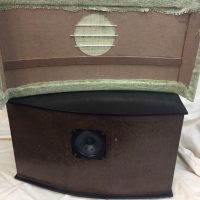 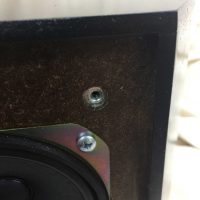 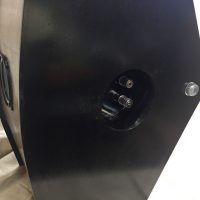 Project Description:
This project is a tribute to Bose’s legendary 901 speakers. The 901s were made from 1968 until 2016 and were a unique design that received both acclaim from critics and intense dislike from some audiophiles. These DIY speakers follow the basic design and goals of the 901’s to more realistically represent live music by using direct and reflecting sound. The speaker is a pentagon shape with 9 identical drivers in each speaker—1 forward facing and 8 rear facing.

Design Goals:
The primary goal is to create speakers that can generate an ‘omnipole’ sound pattern–no single ‘sweet spot’ but a broad, consistent sound distribution. The original plan was to use these in a basement shop where I could be working in many different parts of the room and wanted to be able to have the same quality of music in all the areas. The project was started out of curiosity—I remember hearing a pair of 901s in the 70’s and was very impressed with the sound, although it could have been the girls and beer at the party.

Driver Selection:
Pioneer 4 inch Full Range Driver (269-570). The Bose driver is a unique unit—4.5 inch, 1 Ohm impedance with a good frequency response from 100 to a bit above 10,000 Hz. While a replacement unit for the Bose 901 is available, there are many alternatives that can cover the 100 to 10,0000+ Hz. Because a set of speakers will use 18 drivers, driver cost is a major factor in deciding on the unit. The units used here were a Parts Express ‘Buy-out’ costing less than a dollar each.

Enclosure Design:
The enclosure design follows the size and shape of the final Bose 901 design from the 2000’s—approximately 21 inches wide by 12 inches tall and 12 inches deep to the point of the rear. The 2 rear facing panels are set at a 120 degrees angle to each other and to the sides. The front panel is gently curved so that the center of the speaker is about 1 inch in front of the front edge of the sides, which are about 6.5 inches deep. The speaker terminals are placed in a recessed cylinder on the bottom panel, as in the original Bose design. The visible part of the box is painted black, but the cloth speaker grills are major part of the design. The rear grill is a traditional frame design but extends beyond the speaker body while the arced front grill is slightly recessed and wraps around to cover part of the side panel. The grill cloth was selected to give a vintage look similar to that of the Bose 901s from the 60’s and 70’s.

Enclosure Assembly:
The construction was a little challenging due to the unusual shape of the box. The box was made out of BC grade plywood with a top layer of either ¼ inch MDF (painted black) or 1/8 inch hardboard with a clear finish. Internal bracing was used to add rigidity and to help clamping these panels at the odd angles. The speaker holes were cut with a 4 inch hole saw on a drill press prior to assembly and then laminated with hardboard when the box was completed. The driver holes in the hardboard were cut at 4.25 inches to accommodate the flange of the driver—this also allowed space for silicon sealant. The arced front panel was made from a flat center section of plywood, 6 inches wide, where the driver sits joined to curved struts approximately 7 inches long to connect to the side panels—the entire front was laminated with 1/8 inch hardboard. The rear grill is a traditional frame design with a 30 degree bevel on the side so that they were in line with the side panels. The rear grill is designed to extend beyond the speaker body and it is connected using 6-32 Tee nuts. The Tee nuts were placed into the plywood body prior to applying the hardboard. The front grill is 1/8 inch hardboard with laminated hardboard strips to maintain the arc of the speaker and is just shorter than the top and bottom of the speaker. The hole for the driver has 3 pieces of thin wood to maintain the appearance of the arc. It is secured to the sides using implanted Tee nuts as the rear grill. Both grills are covered with a pale green burlap material secured with hot glue.

Crossover Design:
The Bose 901 were famous for having no cross-over. Later versions had all nine speakers wired in series to give a ~9 Ohm impedance speaker. Since the drivers in this project are 8 Ohm, they are laid out in 3 parallel sets of 3 drivers in series. This gives us an 8 Ohm speaker where each driver carries an equal part of the load.

Tips & Tricks:
Since so many holes needed to be cut, having a hole saw on a drill press was very helpful. The external fit and finish of the speaker was difficult compared to other speakers. Creating a template with speaker and Tee nut placement would be helpful—I did not do this. I used a form cut from a 2×4 on a bandsaw to bend the front panel and grill into the arc. This was essential to get a nice consistent bend as well as provide a way to clamp the hardboard strips to the back of the front grill.

Conclusion:
The speakers share the unique appearance of the Bose 901s that is distinctly different than most speakers—uniquely a mid-century modern look. The sound is also definitely unique compared to other speakers. The imaging is huge! There is almost no location in the room where you cannot hear a good representation of the music—the primary goal has been met. Frankly, you can go into the next room and the music still sounds quite good. The imaging is full and detailed compared to other designs. There is some more blurring than other speakers, as would be expected. In this way, they represent live music better than most other speaker designs. The most obvious deficiency is that they lack a strong bass. The sealed boxes have a gentle roll-off, however, it starts about 100 Hz. While this is noticeable, in listen trials, I felt that it was less important than the uniquely full sound they could deliver. A subwoofer could be added and might be in the future. The upper end has some cone breakup but, again, this is not a deal-breaker for the design. Adding a tweeter to the design could solve that, but would introduce the problems that crossovers and separate range drivers bring with them. Right now, I am continuing to use them as living room speakers. Maybe they will go to the shop at some time in the future.

About the Designer:
The designer (aka JazzzSpazzz) is a long-time tinkerer interested in everything.