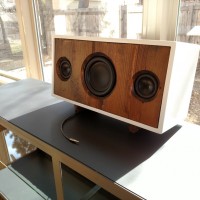 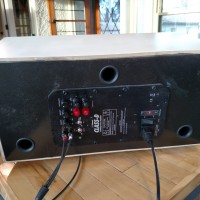 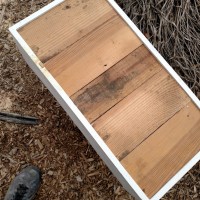 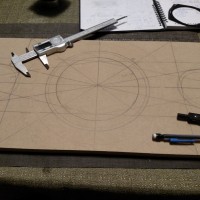 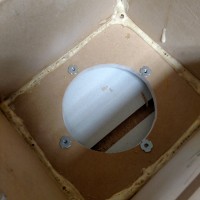 Project Description:
This was originally planned to be a ‘shop stereo’ but ended up turning out better than i thought. so it’s going to live inside now. sounds great!

Design Goals:
I looked for components that would : take a small-ish enclosure, hold up to the elements, and simplify design.

Driver Selection:
I ended up with 3.5″ ‘full range’ alumn cone, rubber surround speakers for the left and right channels. They take a .15 cubic foot enclosure for vented application, so that was just about right for the size I wanted. They also get great reviews for being full range, so that meant I didn’t need a tweeter (which silk domes are cheap but dust would be brutal) or a crossover network. I tuned the box-size and port to center this guy on 65 htz. lots of web calculators and math here. Lots of back and forth.

For the subwoofer, I went with a 6.5″ sub, again with rubber surround. This one took a larger box (obvisouly) but relative to other options, its a small box. Lots and lots of x-max (cone travel) meant I could get deep bass. Again more web calculators and math to get box size and port length – here I wanted to dial in lower, I aimed for 35-40 htz.

For the amp, I originally was planning on a $20 lepai 2.1, but quickly decided to can it, because the thd on all channels was deplorable, and the included powersupply was under-driving (12v vs 14.4) meaning it would be a weakling out of the box. I opted instead for a 2.1 plate amplifier, which could be integrated into the back of the box easily. It also provides tons of clean power, relative to the price. 25 watts x 2, plus 50×1. I’m going to pick up another one of these and build a 2.1 system for my home office. It really sounds good.

Enclosure Design:
It took lots of paper to figure out how to orient these box requirements, amp cut-outs, etc to look good and sound good. That took a long time, and was many pages of scribble.

Enclosure Assembly:
Look ma, no screws! There are no nails or screws in the main enclsoure, which is made from 3/4 mdf, just dados and rabbits and gorilla glue (which is awesome for MDF boxes, because it foams up, sealing everything airtight)

The front panel is made from really really old shipping wood I salvaged from the attic of our garage. Apparently the old owner used to be a furniture maker, and kept all his broken down crate wood up there. I’ve been pulling nails from it and using it for various things around the house. It’s got a great patina I think. douglas fir? I dunno.

Conclusion:
Overall, I’m incredibly pleased with the build. The variable sub crossover let’s me fine tune exactly where I want the balance to be, and independent level controls on l/r and sub allow even more dial-in.

It sounds amazing, and the bass is really something – huge and deep. I’m really really impressed with that little sub.

The thing weighs about 50 lbs, so that helps too 😉

Anyway, here’s a few videos of the sound quality, which don’t do it any justice at all.

About the Designer:
I like building things that make beautiful noises.