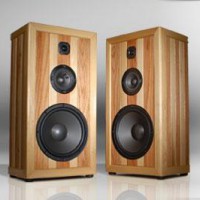 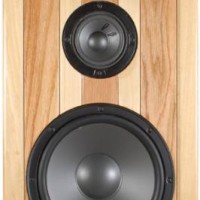 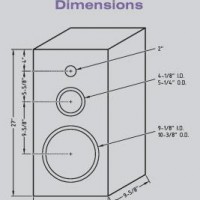 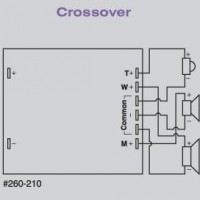 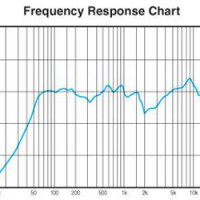 Driver Selection
I decided to go with all 8 ohm drivers since I would be pushing them directly from my Onkyo receiver. I wanted to use a large 10″ woofer just because I grew up with the attitude of bigger is better, but I also felt the system needed to provide ample bass. These criteria led me to the Goldwood GW-10PC-40-8 (#290-324). The driver’s frequency response was listed as 36 to 5,000Hz which I felt was low enough for most of my applications. I also chose this driver for its synthetic cone because it is just a personal preference of mine to go with synthetic over paper for the woofer. The midrange and tweeter were then selected in the same brand, which narrowed the field. I selected the Goldwood GM-85/8 5″ (#280-115) for the midrange and the Goldwood Mylar GT-302/s 2-3/8″ (#270-175) for the tweeter. Like I said previously, I wanted to spend as little as possible and this combination put my total driver cost at about $100.00, which is right about where I wanted it to be.

Enclosure Design
The appearance of the enclosure was the most important element of the project, so this is what I put the most thought into,more on that in the assembly. I chose 3/4″ MDF for the structure and a combination of 1/4″ and 1/2″ red oak, and white poplar 2″ and 3″ wide boards for the “skin”. I used the Parts Express woofer selection guide to determine that the volume for the Goldwood needed to be 0.8 cu. ft. for a sealed box. The width of each cabinet was governed by both the width of the woofer and the board placement. I wanted the oak to stand out a little more on the face, so I used the 3″ wide oak boards which worked out perfectly with the width of the woofer. The depth was established by the width of the boards for the sides as well as the mounting depth of the woofer. Finally, the height was determined by merely wanting a decent spacing between the drivers for the wood to stand out. The inside volume ultimately ended up being a little larger than recommended for the woofer at about 1.3 cu. ft., but I felt the overall appearance was more important. Titanic kit.

Amplifier/Crossover Configuration
Since this was my first set of speakers, I found a pre-assembled 3-way crossover (#260-210) that fit the budget and had crossover points of 800 Hz and 5,000 Hz. This component also factored into my driver selection, because it helped in choosing my driver and verifying it would work with the crossover. Since I have finished this project, I have researched crossover design and construction and I plan to attempt my own on future projects.

Enclosure Assembly
This was the fun part. I knew that since I was going to have two different thicknesses of boards on the front of each speaker, I needed to cut the holes using my newly ordered Jasper circle jig (#365-250) prior to the overall box construction. I spent about 4 hours taking measurements, drawing sketches, and taking remeasurements to make sure I got the fronts right the fi rst time. I fi rst routed all the wood board edges with a 1/8″ roundover bit and then I glued the alternating wood pattern on the front piece of MDF. I made sure to cover the entire back of the wood boards to eliminate any vibrations (I used a total of 5 full tubes of liquid nails throughout the project). After the glue dried, I routed the recess depths for the drivers to be housed and then the actual holes. I cut the holes for the tweeters with a hole saw. After this step, I was able to assemble the actual box and continue gluing the alternating board pattern. The boards around the edges are 1/2″ thick instead of the 1/4″ boards that were used on the face, sides, and top. This allowed me to route a 45 degrees bevel and provide a little depth that gives it an almost picture frame appearance. Then I continued gluing the boards to the sides and top. I sealed all the inside joints with caulk and placed bits of cut foam in it for dampening. The only thing left was to apply 5 coats of polyurethane, screw on the rubber feet, and install the crossover and drivers. To add a fi nishing touch, I used the ring portion of the steel mesh grill to cover the 10″ woofer gasket.

Conclusion
The main goal for this project was to develop a pair of speakers that looked good. I think I nailed that part of it. They are always a topic of conversation for visitors, and the most common words used to describe them are either “unique” or “cool”. They are not flawless by any means as I had a couple of “where is the undo button” moments, but for the most part these blemishes are unnoticeable. The speakers sound pretty good to me-I was actually impressed the first time I hooked them up. I am currently using them as the front speakers for my 5.1 surround, but I can also set my receiver to pure L-R stereo for music and they seem to deliver. I have heard speakers that sound better and I don’t think mine are going to win any awards, but they serve the purpose for which they were created,and that is good enough for me. As stated before, I am a complete novice when it comes to speaker building. This project was the first time I had more involvement with audio output than just simply running a wire from the receiver to the store-bought speaker. I took a total of one Electrical Theory class in college and just skated by since it was an in-major elective. As you can see, you don’t have to be an expert to create something special. I invested a lot of time and a little bit of money and now I have a one-of-a-kind original set of stereo speakers that I know how they work and I know what it took to build them. I feel that makes them that much more distinctive. I guess what it all came down to was that I wanted to prove to myself that I could complete this project. No kits, no directions, no experience. What I think I have shown is all you need is a little research, a little persistence, and,oh yeah,a whole lot of glue!

About The Designer
Brad Taylor is a civil engineer who resides in Charleston, South Carolina with his wife and two sons. A graduate from Virginia Tech, Brad is a Hokies football fan and loves watching their games in HD with the surround system blasting away. Although he has no formal or informal electronics training, Brad is now in the beginning stages of planning and designing a dedicated home theater room. The system will include a custom center channel speaker built using Goldwood drivers similar to those selected for The Woodies.