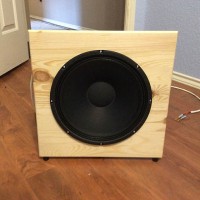 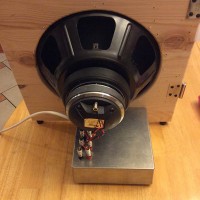 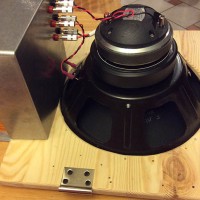 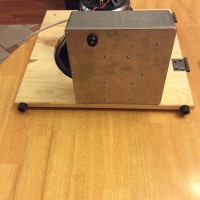 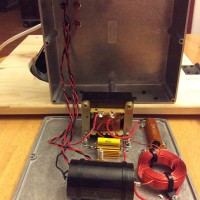 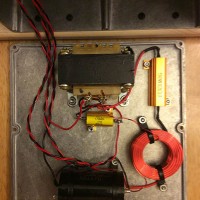 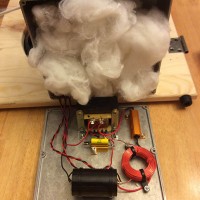 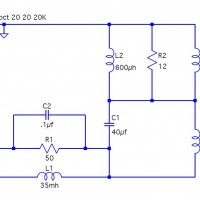 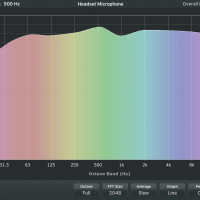 Project Description:
This project is called the Coley OB-12P Point Source Open Baffle speaker. It is a full range open baffle achieving point-source performance through a coaxial driver set. It presents high impedance to the amplifier at high frequency, excellent for use with Single Ended Triode (SET) tube amplifiers.

Design Goals:
After observing the performance of the Coley OB-12C cart speaker, a decision was made to redesign it for use as a stand-alone speaker system. Designing the speaker as a point-source provides not only sonic superiority but also provides relatively compact packaging. Electronic compensation would be used to flatten the response characteristics of both the polyimide tweeter as well as the woofer.

Driver Selection:
Full range open baffle speakers require a large woofer to move enough air to have acceptable bass. An Eminence Beta-12CX was chosen as the woofer due to its 97 dB sensitivity, 0.48 Qts, and 1” coaxial port. A Dayton D250P-8 polyimide compression driver was chosen for the tweeter after experiencing harshness with titanium compression drivers. The D250P-8 can also be crossed over at a relatively low 1100 Hz, avoiding the 2 KHz hump in the Beta-12CX response curve. The two drivers together form a full range point-source speaker.

Enclosure Design:
The OB-12P is a simple open baffle made from 16” x 16” x 0.75” edge glued pine panel but any suitable panel material can be used. A Hammond 1590F 7.4” x 7.4” x 2.65” aluminum enclosure is used to house the crossover and is side mounted just below the drivers on the baffle so that it can also act as a support. Since a custom crossover is used to flatten and correct driver response, the baffle size is not as critical and can be modified to achieve whatever aesthetics the builder might desire.

Enclosure Assembly:
Because the OB-12P is a simple open baffle, construction is quick and easy. Once the 16” x 16” baffle panel and 11” driver hole is cut, all edges can be finished with a router and round-over bit. If solid wood as shown is used, all holes must be predrilled to prevent splitting. I personally use a .099 predrill and #6 x 3/4” screws to mount the Eminence Beta-12CX and the Hammond 1590F enclosure.

The side of the Hammond 1590 enclosure is screwed to the baffle upside down immediately below the drivers so that it can also serve as a rear support. The box is mounted upside-down so that crossover components can be mounted to the box lid for easy access which also puts the crossover mounting screws facing the floor and out of sight. Three rubber feet are used, one each mounted to the right and left sides of the baffle and a third mounted to the Hammond box lid. This method retains stability even if the floor is not level.

Crossover Design:
The crossover is a custom shunt type with high and low frequency driver compensation. C1 and L2 form a first order shunt crossover at 1100 Hertz. L1 and R1 compensates roll-off below 100 Hertz on the Eminence Beta-12CX and C2 compensates roll-off above 8 Kilohertz on the Dayton DT250P-8. R2 functions as an attenuator to match the overall level of the DT250P-8 to the Eminence Beta-12CX. Design optimization was done in SPICE, using measured driver parameters. The resulting performance is excellent from below 50 Hertz to 20 Kilohertz. The use of the Dayton DT250P-8 polyimide compression driver ensured no driver resonance above 20 Kilohertz that can add harshness to the sound.

Conclusion:
Driven by a Coley 215SE 15W SET amplifier, the performance of the OB-12P is outstanding with encompassing bass, excellent separation and delicate highs. The polyimide tweeter gives a transparent and delicate touch to the highs without a hint of the harshness I had previously encountered with titanium compression drivers.

Even though some efficiency was sacrificed for flat response, the volume capability is more than adequate at far less than the 15W capability of the 215SE. For those who may want more, the design as shown can easily handle an amplifier up to at least 25W.

About the Designer:
This project was designed and built by Craig J. Coley of Burleson, TX. I work as an electrical designer and am listed as inventor on 8 US patents in the field of avionics. Contact me at [email protected].