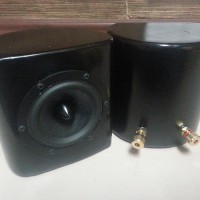 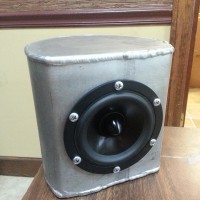 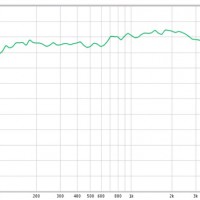 Driver Selection
After trying drivers from Dayton, Vifa, Scanspeak and Tang Band, I settled on the Dayton RS100, and what better time to try the new RS100P (paper version of the same 4″ full range driver). After listening to the RS100 and RS100p I decided that the RS100P had a smoother top end, and better off axis response the the standard aluminum cone driver. This was to be used with our HT sub (15″ Ultimax on 1000w rms, and soon to be a pair) so bass frequencies were of no concern.

Enclosure Design
Since Bass frequencies were of no concern, I decided to use the enclosure as a crossover, and do a small sealed enclosure. The design came from the wife not wanting another standard speaker box in the house, so after much research, I decided on a cylindrical design. I did some testing with a cardboard tube to see if the idea was viable, and after it worked out very well, I decided to take it to the next step.

Enclosure Assembly
We cut out aluminum pipe, mashed one side flat for the speaker to mount to, and then welded on aluminum plate to the top and bottom. After some CLD sound deadening on the plate, and a small slice of Sonic Barrier 3/4″ to further help dissipate rear waves, we painted the enclosure a semi-gloss black, and in retrospect that was a poor finish choice, but it worked out.

Crossover Design
I opted to use the small sealed enclosure as a mechanical crossover, since the design was to be used with a HT receiver (Yamaha RX-A2020, although just about any receiver will do with a small/large speaker setting). This kept complexity to a minimum, as the simplest option is usually the best option.

Conclusion
I am very happy with the results, on the RTA it is pretty flat with a slight bump around the 2k region, which actually helps with the intelligibility of voices in the Home Theater, so it has worked out very nicely. The f3 is 102hz, and with the HT receiver on crossover duty even as low as 80hz, the speaker holds it’s composure very well, even at higher listening volumes.

About The Designer
Kyle Ragsdale, and I come from a background of competing in car audio in sound quality in MECA. I am a big DIY person, and am in process of building my home theater, which is where this project came from.