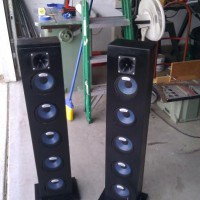 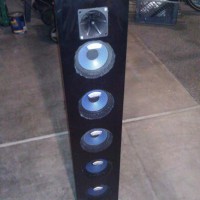 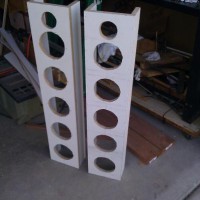 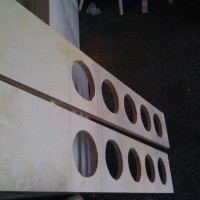 Driver Selection
I used a Goldwood GT-1005 Pezio tweeter which has a great sound after adding a 27 ohm resistor. 5 x Sony 5″ woofers which I was lucky enough to find in Parts Express speaker buyout section

Enclosure Design
The enclosure is 4 feet, 2 inches tall. 9 inches wide, and only 6 inches deep, resting on a base that adds 3 inches on each side for stability.

Enclosure Assembly
The entire enclosure was built using nothing other than a dremmel tool, and glued together with a few supporting nails.

Conclusion
The final results of this project were really impressive. When I began this project, I had no idea the final results would sound so accurate. Vocals sound fantastic! And the bass response does not need a subwoofer for support. I have built many more expensive speaker projects prior to building the Azure Storms, but this was by far the best sounding speaker I have made

About The Designer
Dan Strandt has been selling home audio and designing home theater systems for over 5 years. Unhappy with the quality and/or price of speakers avalible in retail stores, he began building his own. Eventually Dan wants to make a career of custom speaker design.