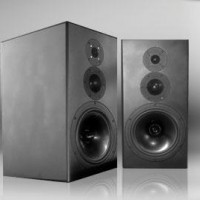 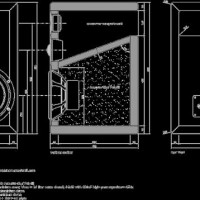 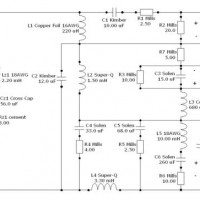 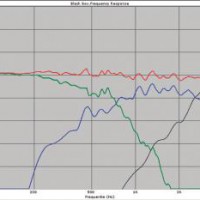 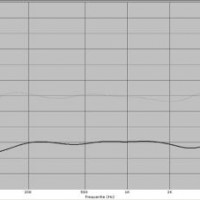 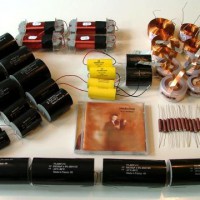 Driver Selection
The only criteria for a woofer to work according to this principle is that the driver must have a low resonance frequency fs (below 30Hz) and a high Q-factor Qts (above 0,40). Basically these type of woofers are designed for use in closed boxes or large bass-reflex enclosures. Browsing around the web, I came across the Dayton RS270S-8. This 10-inch woofer is big enough, has a resonance frequency of 27Hz and a Qts of 0,41. The Q-factor will be raised slightly when there is extra resistance in the signal-path by means of the resistance of connectors and wiring and the Rdc of the inductors, in this case about 0,5 ohms. The Dayton RS270S runs very well up into the midrange, the stiff black anodised aluminium cone showing a very short decay time in the usable area. For a matching pure midrange driver I chose the Dayton RS52AN-8 which is a 2″ black anodised aluminium dome-midrange because of its good on-axis and off-axis radiation pattern. Furthermore the moving mass is much lower than that of a conventional cone midrange, with “speed” and micro-detail in mind, a positive point. The logical tweeter is the Dayton RS28A-4 that also uses a black anodised aluminium dome. I chose a relatively large 1-1/8″ tweeter to improve power-handling and maintain a coherent source rather than use a smaller 3/4″ dome tweeter that has to be crossed higher and therefore “stretching” the radiation point at high frequencies.

Enclosure Design
Now for the implementation of the woofer/capacitor concept. The cabinet volume for the woofer should be calculated based on a closed box with a Qtc of about 1,0. In this case it results in a nett volume of 24 litres, very small for a 10-inch woofer considering that a standard maximally flat Butterworth alignment with a Qtc of 0,707 would have lead to an enclosure about 3 times as large! The midrange and tweeter come with their own sealed rear volumes so they don’t need any extra air from the cabinet. All they need, practically speaking, is a baffle to be mounted on. The size of the baffle is chosen as compact as possible – the minimum width is determined by the width of the woofer, the minimum height is determined by the space required for mounting the three drivers in a vertical line as close as possible above one another. The spare space behind the midrange and tweeter I reserved for the crossover, kept well away from the high pressure inside the woofer volume.

Amplifier/Crossover Configuration
Determining the correct value for the woofer high-pass capacitor is a little fuzzy and besides calculations, involves some empirical determination. The German magazine Hobby-Hi-Fi has done some research the last few years and have come up a simple calculation. The basic formula for working out the rough value of the capacitor is: C=(K x Qts) / (Re x fs). The value of Qts should include all series resistances as mentioned earlier. The value of the constant K depends on the voice-coil inductance. For woofers with a small voice-coil inductance K = 316.000 and for woofers with very large voice-coil inductance, like many sub-woofer drivers, K = 100.000. For standard types like the Dayton RS270S-8 choose K = 265.000. In this situation the formula results in a value of about C = 580uF to 600uF. By fine-tuning the final value of the capacitor one also match the loudspeaker with the room-acoustics. If the capacitor is chosen a little on the small side, say about 10-20% smaller, this will give the loudspeaker a more lean sounding character. This could be ideal for bass-heavy rooms or positioning close to a rear wall. The remaining components of the fi lter form a three-way series crossover with modified second-order slopes and a few impedance correction networks thrown in to ensure proper functioning of the network. The result of all these measures is a frequency curve with an efficiency of 85dB/1W/1m that is within +/-0,5dB’s over the entire range and a near ruler-flat impedance curve that is centred around a healthy 6 ohms. This should be an easy load for any amplifier. The crossover components were chosen for their good price/quality ratio. Nothing exotic with standard quality MKP’s through out except for the critical tweeter capacitors C1 and C2. Inductors are standard air-cores where low Rdc is not an issue, laminated-core inductors are used where low Rdc is important. The sound-wise critical midrange inductors L1 and L3 are copper-foil types. All the resistors are induction free types, the couple of extra bucks are worth it here.

Enclosure Assembly
The very solid cabinet is constructed from 36mm mdf with all external edges rounded off with a 10mm radius. Inside there is just one partition separating the woofer volume from the crossover compartment. This crossover compartment is open on the back for easy access. The partition is placed at an angle to minimize standing waves between parallel walls. Damping material consists of a 100% fill of the woofer volume with Acousta-Stuff polyester fi bre wool, no further measures are needed. The thick cabinet walls make the loudspeaker very sturdy. All the drivers are recessed in the baffle and on the rear there is a single pair of high-quality binding posts. The cabinets are finished in matt black paint, together with the black anodised cones, domes and face-plates this gives a “Stealth- Like” look to the speakers.

Conclusion
These speakers are best placed on sturdy stands with a bit of space around them. Image size is at its best when the speaker are tilted back slightly, about 5 degrees and the centre between the tweeter and midrange is about at ear-height. The end result of the driver choice, cabinet construction and well thought out crossover design and components, is a very neutral sounding loudspeaker with full-bodied bass, a detailed and coherent image and seamless from top to bottom. The amount of detail at all frequencies lets you listen deep into the recording and at the same time these speakers are not at all over-etched. They combine warmth with detail. The woofer high-pass capacitor concept has proven to be a useful means of combining a large woofer with a small enclosure volume without sacrificing deep bass.

About The Designer
Tony Gee, founder and owner of Humble Homemade Hi-Fi, has been into music and audio from a very young age. Even during primary school years he was experimenting with old valve radios and full-range drivers mounted in cardboard boxes! At the age of fourteen he was able to buy his first bass-guitar (after having peeled tulip bulbs for six weeks) and he formed his own band. He studied arts at the teaching academy and architectural design at the art academy. Later in life he switched from bass-guitar to the double-bass and took lessons from the well known Danish bass player Peter Bjornild. Meanwhile, with over 27 years of experience in loudspeaker design and various publications in audio magazines, his name has become widely known in the international world of loudspeaker building.