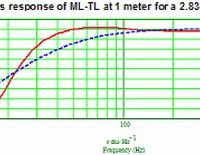 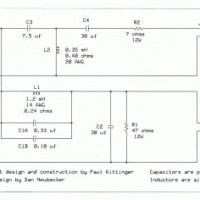 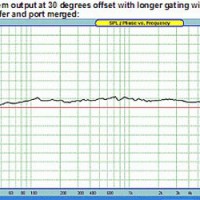 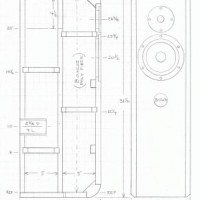 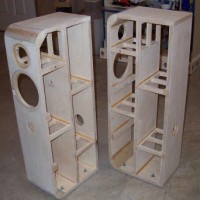 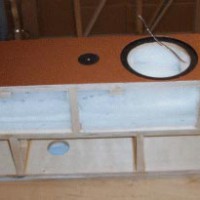 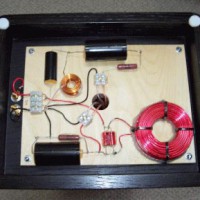 Concept
I created the Brillante speakers specifically to enter them in the Under-$200 Category at the 2014 MWAF (it took 3rd place) and wanted to maximize the quality of the drivers, at least theoretically. So, I decided it would be a 2-way and have, of course, a transmission-line (TL) enclosure for the woofer. I also didn’t want the cabinet to be so large or heavy that I couldn’t carry it by myself. I diverged from my usual cabinet style and finishing as a good-natured retort to ‘Wolf’ ragging me about my speakers always looking the same.

Driver Selection
For the woofer I chose the 4-ohm version of the RS180 for its higher sensitivity, and for the tweeter the SB Acoustics SB26STAC, both costing about the same amount. The total cost for all 4 drivers at standard list prices was just under $188.

Enclosure Design
The RS180’s performance models very well in a mass-loaded TL 60 inches long and with a net line volume of about 1.3 cubic feet. Folding the line in half sets the internal cabinet height at 30 inches. The resulting cabinet’s height would be too short for a floor-stander, but I didn’t want to just sit it on a stand. So, I built it with an integral pedestal-type of stand that’s bolted to the bottom of the cabinet. The space in the stand’s base allowed mounting the crossover assembly upside down and with easy access, while not consuming any volume within the cabinet. I modeled the ML-TL with Martin King’s ML-TQWT worksheet (Rev. 2-09-08), resulting in a predicted anechoic f3 of 33-34 Hz and a very smooth response.

Crossover
Dan Neubecker designed the crossover, doing his typical excellent job as he has for me on at least three previous designs. The corner frequency is 1800 Hz, with a 4th-order slope on the woofer and a 2nd-order to 4th-order transitioning slope on the tweeter. There is also a tank circuit on the inductor in the crossover to squash the woofer’s inherent high-frequency breakup centered around 7 kHz. Dan incorporated ~3.5 dB of baffle step compensation at my request, resulting in a final in-room system sensitivity of 86-87 dB SPL with a 2.83-volt input. As I built them, component cost for the pair of crossovers totaled to ~$130, but it’s also possible to build a pair for ~$75 without having to resort to using NPE capacitors. You can use a Jantzen 15-gage P-core inductor instead of the Erse 14-gage air-core inductor, standard 10-watt power resistors in place of the 12-watt Mills resistors, and all Dayton Audio or Solen polypropylene capacitors.

Enclosure Assembly
In the summer of 2013 my younger grandson and I built a pair of computer speakers for him to take back to college that were finished with copper hammer tone paint. I had some of that paint left over and decided to use it on this project. To add some contrast I wanted a good portion of the assembly to be black, but not simply painted black, as I wanted to use real hardwood with very visible grain and a bit rustic in appearance. So, I decided to create my own “black oak”. With some helpful guidelines from “bobbarkto” on finishing, I made black oak by dyeing solid, 1/4-inch-thick red oak with a water-based ebony dye, followed by 5 coats of satin polyurethane. The sides of the cabinet were made and finished this way, as were the pedestal base assemblies. I used 18-mm Baltic Birch Plywood for the cabinet, line divider and braces. From a previous project I had some leftover MDF molding material with a 2-inch-radius round over and used it for the top and bottom corners of the baffle. Following a coat of shellac-based primer, the cabinets’ external surfaces were finished with 2 coats of copper hammer tone paint applied with a small-diameter foam roller.

The transmission line starts at the bottom at the front of the cabinet, continues up to make a u-turn at the top, then proceeds down to the bottom at the back of the cabinet. The entire front half of the line is filled with polyester fiber at a uniform density of 0.75 lb/ft3. With the woofer’s location pretty much dictated relative to the tweeter’s location, the optimum location for the port was determined via modeling the line’s performance. The port’s dimensions were determined based on the system tuning frequency (31 Hz) required for an overall flat response while minimizing the port’s air velocity as much as possible.

Conclusion
This was a fun project for me and it’s also a very high-value, high-performance design. It isn’t very large, either, but it sure doesn’t sound small. The cabinets can be placed close to the wall, like I have to place them, or they can be pulled out into the room a ways. To my ears the sound of the Brillantes is detailed, well balanced from top to bottom and suitable for many types of music.

About The Designer
I have a BSEE degree and worked in the medical device industry for the last 36 of my 40-year career, retiring in 2003. I started out in design, then switched over to quality assurance and regulatory affairs for the last 25 years, eventually serving as Manager, then Director of those departments (while continuing to contribute to the electronics design of products throughout that time). Audio and speaker interests developed naturally from my wife’s and my education, musical abilities, experiences and preferences. I designed and built several solid-state preamplifiers (one was for extra credit in college) and power amps for my stereo setups over the years. I made my first serious attempt at building speakers in the late-’90s. That pair of speakers is still in use today by my son-in-law. Exploring different bass alignments eventually led to experimenting with transmission lines, and once I started to use Martin King’s modeling software, really good sound, particularly in the bass, consistently resulted. TLs are what I prefer and do almost exclusively, not only for personal builds but also for just about anyone that asks for help.