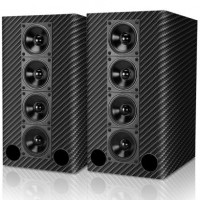 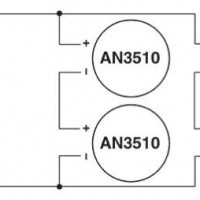 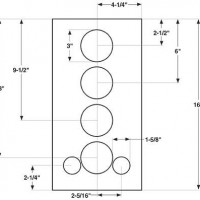 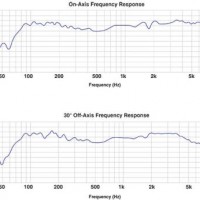 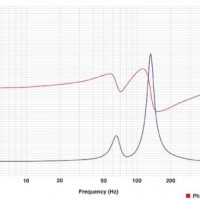 Driver Selection
Celestion’s AN3510 is meant to be used in portable line array applications (indoors and out), but I was intrigued at its potential use in a set of book shelf or near field monitor speakers. The driver’s ruler flat response would mean quick and easy crossover design (though I expected comb filtering to occur somewhere around 3,800 Hz and above due to the minimum center-to-center distance).

Enclosure Design
Using the SketchUp files that I had created for the 0.56 cubic foot knock-down cabinet allowed me to have a suitable driver layout in about 30 minutes or so. I would have preferred to create this using Schedule 40 4″ or Schedule 60 6″ PVC tubing, but I wanted this design to use something quick and easy to put together in the case that someone would build a line array. For maximum extension, the cabinet needs to be tuned to 68 Hz for an f3 of 66 Hz, but I settled on 80 Hz since this is where you would want to integrate a subwoofer. To accomplish this without exceeding vent air velocity (which creates port noise), two 1-1/2″ diameter by 1-1/8″ long port tubes would need to be used. One could use a small sealed cabinet, but don’t much output below 200 Hz.

Amplifier/Crossover Configuration
We don’t need no stinking crossovers! If you want maximum power handling, I would suggest a single series 200 microfarad capacitor. Without the capacitor, I would rate these for 10 watts power handling per module, which is enough for more than 100 dB of output. Once I wired the speakers series-parallel, I took 2.83V/1 meter measurements directly on and 30° off-axis. I had expected to, at the very least, to have some baffle gain to deal with and to see some comb filter issues. As you can see, these drivers seem to violate the laws of physics… The bi-amp speaker terminal cup was used for simplicities sake when connecting modules together for line array use.

Enclosure Assembly
Using my trusty Jasper circle jig and router, I cut four evenly spaced and centered 3″ holes for the drivers on the baffle, and two 1-5/8″ holes for the 1-1/2″ diameter port tubes. Refer to the baffle layout for dimensional alignment. After the holes were cut into the baffle, I assembled the cabinet and waited for the glue to cure. Once the glue cured, I cut the hole on the back side of the cabinet for the dual binding post terminal cup. One sheet of 1-1/2″ acoustic foam is all that’s needed per cabinet. I have to report that this entire project, minus the finishing touches, went together in less than eight hours. Had I not had to wait for the wood glue to cure, I truly think it could have been accomplished in under four hours. This is not a testament to my wood working prowess (which anyone can attest to my lack thereof), but more about how quick and easy the knock-down cabinets go together, wood clamps weren’t really even needed had I had some aggressive tape at hand (but I used some anyway). Trust me—anyone can build a speaker using these cabinets!

Conclusion
These speakers are pretty special, and even converted one person who had never heard a full range driver he liked! Extremely wide horizontal dispersion, limited off-axis vertical dispersion that virtually eliminates floor and ceiling bounce, and a great frequency response… Celestion’s AN3510 drivers truly are plug-and-play, and without any crossover to speak of, signal-in is absolutely signal-out. I can see the price causing concern with our budget minded customers, but when you consider how quickly you can get a set of great speakers up and running, without any additional cost, the price can be justified. Additionally, with this design, you can build a line array four drivers at a time.

About The Designer
Mike Van Den Broek has been an electronics enthusiast all of his life. Mike’s designs reflect a desire to stand out from the crowd, yet draw listeners in with the sound. Unimpressed by what he has seen in the retail audio industry, Mike prides himself on his ability to make speakers on his own that not only sound better, but also cost less.