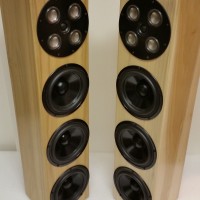 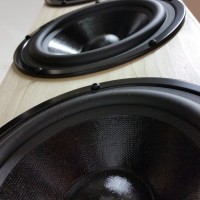 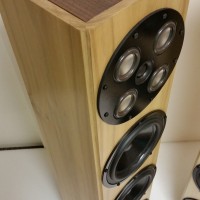 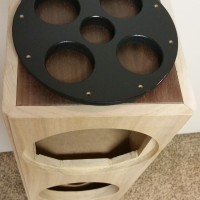 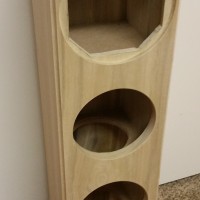 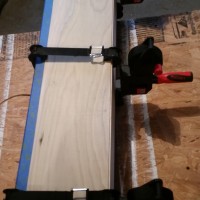 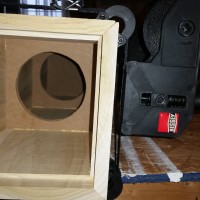 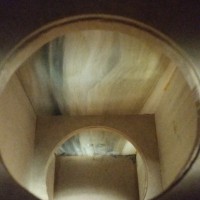 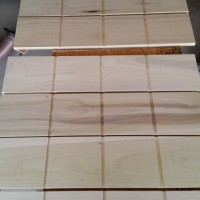 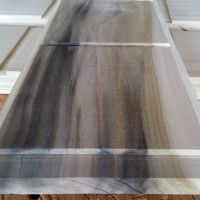 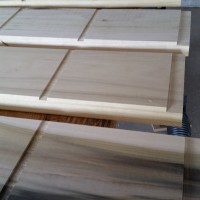 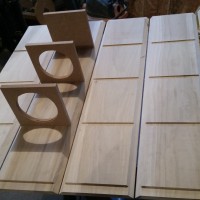 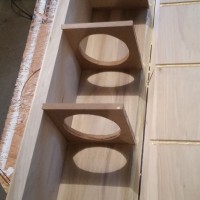 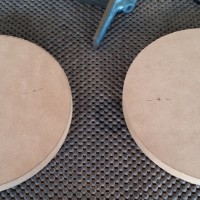 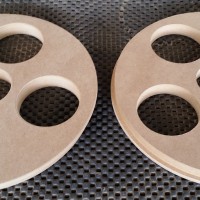 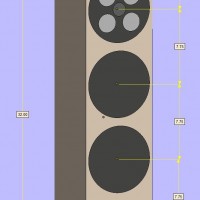 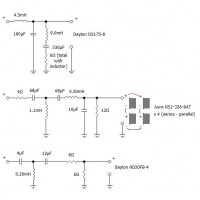 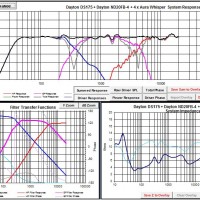 Design Goals:
The major design goal was to experiment with the idea of mounting a tweeter concentrically to a group of small midrange units to see if there is any sonic benefit. There are currently several different types of coaxial 2-ways that all have their own set of compromises. I had not seen this arrangement before and was curious about the results. In order to keep the drivers in a tight grouping to minimize comb filtering, I settled on using very small drivers for the midrange and treble and then supplement the bottom end with a woofer. Going through various layouts, I settled on the woofer + 2 PRs format mostly for aesthetic purposes.

Driver Selection:
I knew there would be some drawbacks to using multiple midrange drivers in this layout, so I wanted to keep them as close as possible. This led me to the square-frame mini-drivers, of which the Aura Whisper seemed the most capable and amongst the smallest. Since I was going 3-way, this driver’s lack of bass capability was a non-issue.

The tweeter was easily chosen as the ND20FB-4 is a proven performer and happens to mount the same way as the Whisper, and has a similar square frame that can squeeze right in the square void left by the four Whispers.

Once I had chosen my format, I needed a woofer that had matching PRs available. Since the mid/tweeter combo would fit in the space of a 6.5″ woofer, the Dayton DS175-8 seemed a natural choice.

Enclosure Design:
The enclosure is a simple rectangular prism 32″ x 7.5″ x 7.5″ that is divided into two sections: a 0.12 cu ft sealed midrange enclosure in the top 1/4 of the tower and a 0.4 cu ft bass reflex enclosure for the woofer and PRs in the bottom 3/4 of the tower. There are window braces every ~8″ in the woofer section to minimize panel resonances.

The passive radiators were tuned low for an EBS type alignment that was then augmented by lowering the upper frequencies in the woofer passband in the crossover, effectively trading efficiency for low frequency extension flat to about 40Hz. This was achieved by adding 35g to each passive radiator.

I initially tried to put the active woofer in the bottom position to gain the benefit of the boundary reinforcement, but I could not get rid of a very annoying midbass hump in that position. I subsequently moved the woofer to the top position, just below the midrange section. This cleared up the boominess and provided much better woofer-to-midrange integration.

The midranges and tweeter were mounted on a 1/2″ thick MDF “plate” that I cut to be the same diameter as the DS175-8 woofers.

Enclosure Assembly:
I used solid poplar for this project because 1) the panels are narrow enough that the soft wood should not resonate too much, 2) I love the color variances of poplar sealed with a natural finish, 3) it is inexpensive for solid wood. As can be seen in the photos, each speaker consists of four identical poplar panels for the front, rear and sides. Each panel is dadoed or rabbeted to accept either the top/bottom panel, the window braces, or the mid/woofer divider. The edges of the poplar panels were mitered, then the four panels were glued and “rolled up” with the internal braces/divider in place, then clamped with strap clamps. Once glued, I ran a cove bit down the 32″ corners to help conceal the imperfect glue joint. This left just barely enough room for the nearly 7″ woofer diameter.

I cut all the holes on the front panels after the box was glued up. This is very scary, but I wasn’t sure the front panel could withstand the force of the strap clamps with holes cut so close to their edges. Thankfully, it turned out fine.

The midrange opening was made by first cutting a recess 9mm deep where the plate would sit and then cutting the hole the rest of the way through only in the necessary areas (with a jigsaw), which leaves a mounting lip all the way around the inside of the hole (see pics). I then rabbeted the midrange plate to leave a 3.5mm lip on the front to match the thickness of the DS175 flange. This allows firm mounting engagement between the midrange plate and the lip in the midrange mounting hole. I used 8 screws as I was screwing directly into a soft wood. Mounting the mids and tweets was relatively straightforward, although I did have to use an adjustable hole cutter for the tweeter to get the hole size just right. The Whispers were a perfect press fit into the hole left by a 1-7/8″ hole saw. All drivers were mounted from the rear with 1/2″ screws.

Crossover Design:
Things got a little dicey here! As mentioned before, the woofer did not want to cooperate when mounted low to the ground, but as soon as I moved it to the top position, it played nicely. Using the LCR circuit to tame the impedance peaks, I was able to tilt the top end of the woofer’s passband down to be in line with the “extended” portion of the EBS alignment, effectively extending what should have been a 55Hz F3 down to below 40Hz – of course, at the expense of efficiency. A standard 2nd order electrical circuit crosses the woofer over nicely at about 350Hz.

Now the on-axis tweeter response was horrible due to the equally located disturbances from the Aura cones as well as the 3.5mm lip that the tweeter is concentric with. As this is a short tower, however, and even seated listeners will be 10-15 degrees off axis in the vertical, I used this as my design axis and the tweeter response here was smooth as silk.

The midrange response was the complete opposite – very smooth on the tweeter axis as all four drivers were equidistant from the mic, but pretty rocky off axis as the comb filtering started to materialize. Luckily, on the design axis of 10-15 degrees up, the first cancellation happens above the 4300Hz crossover frequency, so within the normal range of standing and sitting, near and far, the midrange group and the tweeter remained in a range of flat FR and good integration.

A 3rd order electrical highpass on the mid and tweeter and a 2nd order lowpass on the mid created good 4th order acoustical roll-offs with decent phase tracking as can be seen in the reverse null witness lines on the FR graph.

Conclusion:
This was cool and I learned a few things from this project. I already knew the ND20FB-4 was a solid performer in a really compact package, but now I can put the Aura Whisper in that category too. It has a very unique and open architecture that pack just about as much speaker as possible in a box that size. The open back leads to a very open and natural sound. I’m looking forward to using this driver again.

The DS175-8 was a pleasant surprise too, because I thought it would be the same build level as the matching SD series DVC woofers, but I think they are actually a step up. The large magnet controls the cone very well and in this small enclosure with the PRs, this woofer just wouldn’t give up. I was getting after it pretty good with a 300 watt amp and it didn’t mind at all. This is a good woofer at this price point.

As for the system – it’s a great sounding system that can put out a lot more sound than you’d think based on its size. Also, I really like the aesthetic, just because it’s different. But… I can’t say my experiment was a success. I don’t think I am hearing any sonic benefit from the concentric mounting format. There may be a higher level of coherence in the midrange/tweeter transition, but it’s not strong enough for me to sure. These drivers were well suited enough to the format that it worked out well, but I’m not sure the format itself adds much benefit.

About the Designer:
I have been building speakers for over 20 years and am a member of the Parts Express Design Team.