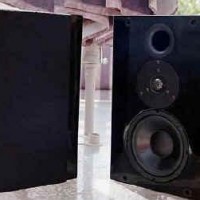 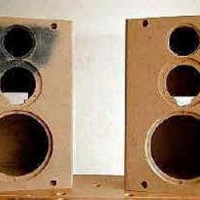 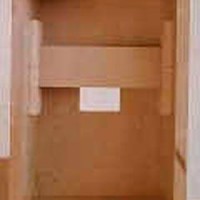 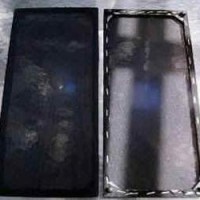 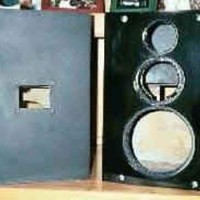 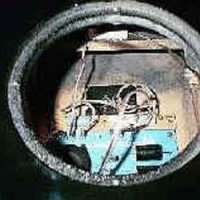 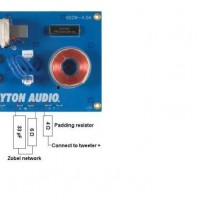 Enclosure Design
I originally planned to build a sealed box because I knew nothing about tuning boxes or porting. But as time passed and I read various posts, and worked on other boxes, I decided I could manage a ported box. Viperoni (Rudy) responded to a post I put up asking about port calculation, suggesting the flared port listed in the parts list. I messed around a bunch with PEBox and WinISD, and also looked at both Paul and Wayne’s 305/070 projects trying to determine box size. I also knew that because these speakers might wind up on a bookshelf one day, I had to front port them, which impacted the size of the front baffle and kept pushing me to a bigger box. I finally settled on around .52 ft^3. Playing around in WinISD, I came up with overall dimensions of 14.25″ H x 9″ W x 7″ D. The internal volume using these dimensions is .5195 ft^3, not accounting for an internal H-brace or the volume of the drivers themselves. In the past I had inset the baffles and was not that happy with the result, so this time I decided to glue the front and back baffles to the rest of the box, rather than inset them. This led to the following external dimensions (all 3/4″ MDF): front and rear baffles – 10.5″ x 15.75″; sides – 7″ x 15.75″; and top and bottom (which wound up being the inset pieces) – 7″ x 9″. I cut them on an old table saw my dad gave me years ago, after having finally gotten wise and purchased a rather inexpensive but serviceable Black and Decker carbide blade at Home Depot.

Amplifier/Crossover Configuration
As I write this, I have yet to build my own crossover. I had ordered the stock Dayton 2000 Hz crossover when I first started on this project. As time went by, I learned about Zobel filters and posted a question about whether I should use one. PE Paul resoundingly responded “Yes” and gave me values, including a bypass cap. I had no need to place a PE order at the time, so off I went to Fry’s to buy the parts (see parts list). I never could find a .1 uF bypass cap anywhere, even later when I had reason to order from PE – that cap was backordered at the time. So, my Zobel is a simple cap + resistor unit. I soldered the cap and resistor together, Gooped them to a piece of Masonite the measurements for which did not keep, but around 1 inch wide and as long as the long side of the Dayton crossover. Those were soldered to positive and negative lead wires, one end to go to the crossover and the other end to go to the woofer. Initial listening tests disclosed a very harsh sounding tweeter. Wayne had already indicated padding the tweeter might be necessary, but I tested the speakers first without padding because I like bright highs. Bright, yes; harsh, no. So using twist-on wire connectors, I made a temporary tweeter pad putting a 3.9 ohm resistor in series with the positive tweeter lead and tested again. Much better! In final construction, the padding resistor was soldered to the positive tweeter lead and was Gooped to the H-brace. (See Picture – near the top of the woofer hole, you will see the white sandcast resistor glued to the H-brace.)

Conclusion
I know it’s not Oscar night, but I have to thank PE Paul, Wayne Jaeschke, Viperoni, and other folks whose names I neglected to record who posted responses to questions; Parts Express for selling good stuff at reasonable prices and for hosting such a great message board; my dad for the table saw; my wife for helping with the grilles (as well as all the other obvious mushy stuff); and my son for helping with the name.

About The Designer
Dan Carroll is an attorney who is nearing 50 but knows he is not 14 years older than he was when his son was born, nor 6 years older than when his daughter joined the family through international adoption, and certainly not 16 years older than the day he took his wedding vows. He specializes in energy issues, which means you can blame him for the energy mess in California if you wish – he sure should not be running an old table saw and a new router putting load on the system in present circumstances! He lives with his family and a golden retriever/chow/spaniel mix named Beauregard Emanuel Carroll in a small suburb of California’s fair capitol city. When he is not working, spending time with his family, reading Tech Talk and speakerbuilder.net, working, building speakers and listening to music on them, working, watching his son’s Dixieland jazz band perform, eating too much, or working, he sleeps.