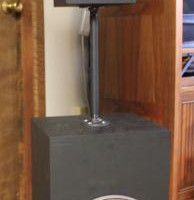 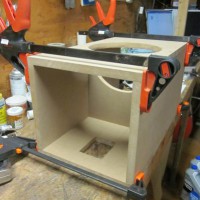 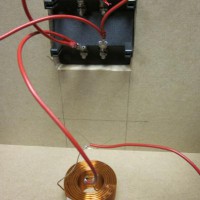 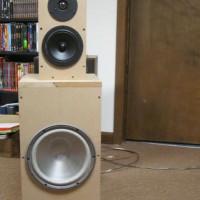 Driver Selection
I started with the midrange. For me, the midrange is very important. It is the central anchor for the system. The lows and highs should coalesce with the mids. I chose the Tang Band W5-704D 5-1/4″ woofer. I was impressed with Tang’s three inch full ranges and this woofer has features that are unparalleled for the price. I really liked the Dayton DC28F-8 because it had a similar SPL to the Tang Band and it looked like a robust package. Dayton’s products have also impressed me in the past. Once again, it is unbeatable for its price. I decided to use a 10″ subwoofer as the low in this three way purely because of value. I used the Bravox UXS10D-4. It looked aesthetically nice and I couldn’t find anything else like it in the price range.

Amplifier/Crossover Configuration
The crossover is a basic first order Butterworth at 500 and 4000 hertz. I also added a 2.4 ohm audio grade resistor to the Tang Band midrange. I wired in a switch that bypasses the high pass on the midrange so the upper enclosure unit can operate in full range without the subwoofer. As for the amplifier, I used what I had lying around. It was a 1974 Marantz Model 2220. I got it from the floor of a friend’s garage and cleaned it up. I had to replace all of the fuse lamps in the front panel. It is a beautiful receiver and punches above its weight. It is only rated for 20 watts RMS. It easily drove these three ways at 8 ohms.

Conclusion
One word: fast. I was amazed at well I could hear silence between the slaps in the background of “Second Hand News” by Fleetwood Mac. It also provided detail and clarity to constant synthetic beats in “Hardrock” by Herbie Hancock. The bass was certainly strongly present, but damp well enough to sound natural, especially in the drum solo in Rush’s live performance of “YYZ.” I fell in love with these speakers. They are very well suited for subtle and natural music, but aren’t accustomed for metal or hard rock. I will leave that business to my previous speaker project, which is still in the works.

About The Designer
Dan is a young music enthusiast who strives for accuracy in a world of degrading musical quality. He loves electronics and mechanical technology equally. He wants to become a mechanical engineer in his future, but will never lose a love for music and stereo technology.