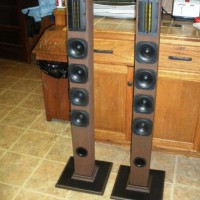 Driver Selection
After getting serious and looking for drivers, I settled on the Tymphany TPY04W08O001ES 4″ woofer and Dayton Audio PT2C-8 Planar Tweeter. The woofer went down about the lowest from what I found in the PE website, look good in the cabinets and are made very well. Plus they cover the upper bass & midrange very well. Together they are a fairly nice combo and the 4 woofers in each cabinet come close to matching the higher SPL output of the tweeter. Right now, I’m running a 4.7uF cap on the tweeter and letting the woofers run full range. In each, two of the woofers are wired in series and then each pair is ran parallel. For future upgrades I plan on adding a second port and adjust the tuning and install or build a crossover once I figure out what cutoff combinations work best.

Enclosure Design
I found some composite fence post covers an clearance at Menards (about ¼” thick with an internal measurements of 3.5×3.5.”) The final revision is about 46” tall and seems to work rather well. I painted it brown with metallic black accents to match some of the contemporary furniture we have in the living room. The overall frequency response is roughly 80Hz – 25kHz. As mentioned, the port is tuned somewhere around 63Hz. The cap & lower trim ring were stock stuff from Menards painted to match the rest of the cabinet (they were all brown, but slightly different shades. The base is a 12” square piece of mbf trimmed out with ¼ round. The base is metallic black and the ¼ round is brown to match the rest o the speakers. The next thing I need to do (which I really don’t want to) is to rig up some kind of grill for them as our 18 month old likes to go over and push on the drivers. She’s already poked in two of the dustcaps, but fortunately no damage was done and they were pretty easy to pop back out, though it did require some work.

Amplifier/Crossover Configuration
Right now I’m running these on an older Marantz 2226B receiver w/ a small 8” Paradigm powered sub, just to give a little bit more low end. I’ve also got a full tube system w/ two 20 watt tube monoblocks I’ve ran these on and they really match up well to the tubes, but they are staying upstairs since their about the only thing I have with a high enough WAF to let me keep them upstairs.

Enclosure Assembly
The assembly is pretty straight forward. The final design is 46″ high, has a 12×12 base.

Conclusion
Imaging is very good overall and they lend themselves to a fairly wide range of music. With Acoustical music they hold their own without a sub. Home theater, classic rock they show their lower limits and need a sub. I still have some fine tuning to do on them but overall I’m happy and they have a high enough WAP that they will stay as the main speakers upstairs, at least for now. Plus its kinda fun to have friends over and they look and stare and almost always ask “are those made from fence posts!?!”

About The Designer
My full time job is an IT analyst in Columbus, In. Speaker building is something I’m just starting to get into and will do as time allows. I’ve had fun with this project and am already thinking up the next one.