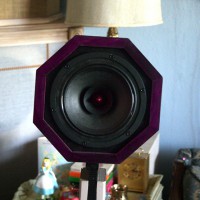 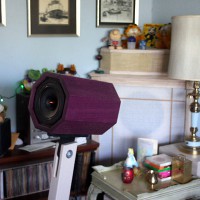 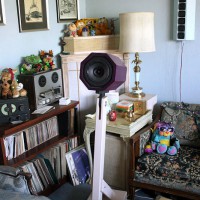 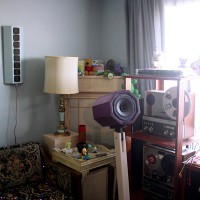 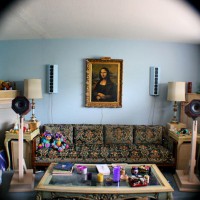 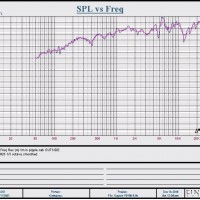 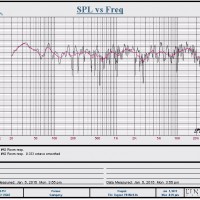 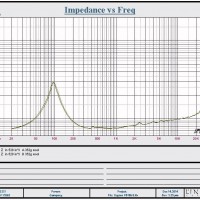 Concept
A two way system using a 10″ woofer and the Dayton PS-180-8 with a crossover point of 200 hz., electronic being preferred for reason of simplicity. A passive network may be designed in the near future to prove the point about passives mentioned in the Design Goals. This may also include a switching network to switch between passive network and one amplifier to a bi-amped system for A-B comparisons.

Design Goals
To design a two way system with a speaker that can handle the passband from 200 hz and up. While I have designed a few three way systems, the transition from the mid to the tweeter can be tricky. A golden eared listener can detect the crossover point, thus differentiating the upper register units. With a passive network, this can be difficult to avoid as components’ tolerances have to be very close, better than 0.5% and have to be matched to the load impedance imposed by each of the two units. This results in two slightly different crossovers. A high end midrange unit here has a nominal impedance of 7 ohms @ 317hz. At 4khz, the impedance is 16 ohms. Designing the upper limit of a bandpass filter for such a unit assuming 8 ohms is a waste of time. Many manufacturers publish impedance curves; use them.

Driver Selection
There are undoubtedly many 10 inch drivers that could have been used to compliment the Dayton. The one I used happened to be in my inventory, purchased a few years ago simply because they were on sale, had a 300w power handling capacity, and the T/S parameters permitted it’s use in a ported cabinet of 3 ft^3 with an F3 of 34 hz. Space for these cabinets was very limited; they are designed in two sections clamped together. The front half of the cabinet fits under the end tables while the slightly taller other half rises above the top of the aforementioned tables and now serves as a new location for the lamps. The 300w power handling capacity allows the woofer to keep up with the Daytons. The electronic crossover has output level adjustment controls.

The Daytons, once seen on Parts Express made me ecstatic (Dec. 2012). What a find. The last time I saw such a speaker was well over 50 years ago. It was the venerable GOODMANS AXIOM 80. I’ve seen some on auction websites bring as much as $4500.00 for a working pair.

Enclosure Design
The Daytons are housed in octagonal satellite cabinets with a minimal diameter to help reduce diffraction, however noticeable that may be, if at all; ergo, the front edges were not rounded. The wood is solid 0.75″ purple heart, almost as hard as ebony. The internal volume is 0.22 ft^3 as per Bass Box Pro, ver.6 and are sealed with a optimal Q of 0.707. The fill is 352g of pure New Zealand wool, washed but otherwise NOT treated. These units were ‘broken in’ at 3mm excursion for about an hour at 10hz while periodically monitoring the voice coil temp with an infrared thermometer. The free air resonant frequency was reduced from about 60hz to about 48hz. The T/S parameters of these two units were then derived using L.M.S. (Loudspeaker Management System by Linear-X) and differ slightly from those of the manufacturer, due to the breakin.

Amplifier Crossover Configuration
The amplifiers in the living room are all ADCOM. The Daytons are powered by a 60w/ch unit whilst the woofers are powered by 100w/ch. The preamp is fed through a Behringer model CX3400 electronic crossover, purchased here at P.E. simply because the price was right and at the time, I needed another toy, as if 3 other electronic crossovers wasn’t enough. There are two Furmans, one of which is in use in another system in the ‘music room, a converted and acoustically modified two car garage. The third is a vintage Pioneer model SF-850 that was salvaged from a junk heap at a speaker repair shop some 25 years ago. It didn’t work at the time but after acquisition of a service manual, a couple of transistors made short order if its affliction.

Conclusion
The end result was better than expected. They are bright by many standards but not as implied by the response curves. That is subjective as I like most of my music bright, especially old Kansas City Jazz of the roaring twenties and dirty thirties. That’s easily subdued with a graphic equaliser to suit personal preferences. Stereo imaging, despite that I’m not fanatical about that, is incredibly wide and stable. The speakers virtually disappear on well recorded stereo recordings. The Daytons are quite linear to about 18 khz, ergo a tweeter is superfluous.

Total cost of the satellites was less than $200. The stands were previously made to hold two other satellites housing a pair of Hi-Vi Trinity 6s. The rest of the equipment was previously purchased for a myriad of other reasons; I do a lot of experimenting but for the record, add about $100 for the 10 inchers and $50 for their cabinets; another $130 for the Behringer CX3400 electronic crossover. The purple heart was purchased on sale for about $60; normally $130. Total cost less then $500.

1 (1251) The living room, such as it is or was. A dream to an audio buff but a nightmare to others. The Dayton satellites are in the foreground and the associated woofers are under and behind the end tables. In the corners are a pair of Briggs’ three ways similar to the original which can’t be seen in this piccy; it’s way to the right. On the wall is a pair of line arrays, an experiment using the HiWave BMR12 (299-208) but very silimar to the 297-212 and the 295-236 units still sold here on Parts Express. A project will soon be submitted. This piccy was taken with a wide angle lens as the farthest I could get was 14 feet away with the camera atop a tape recorder rack. The opposite wall is 16 feet wide.

2 (1245) The right channel. The two amplifiers are below the lower tape recorder; the electronic crossover is on the top of the shelf unit. In the lower left is a G. A. Briggs three way built by a half brother in 1957 which I was given in 1972. The corner system is the same with the exception of a corner design. The 3 ft^3 woofer cabinet that accompanies the Dayton is under and behind the end table.

3 (1246) Left channel. The tan stands were originally designed to hold cabs for the Hi-Vi Trinity 6. At the time, the intent was to allow them to blend in with the other antique finished furniture and cabinets. The pedestals house the 3 way passive network for those Trinitys but are now bypassed. Eventually, stands for the purple Dayton cabinets will be made.

4 (1247) Side view closeup. The purple colour is the natural colour of purple heart wood. It was polished with fine sandpapers and waxed. The surface feels like soft leather to the touch.

6 (DAYTON2) Frequency response @ 1w/7.5 ohms (ref. 1khz). This is measured at 1m on axis with the speaker in its enclosure and stuffed with 352g wool. The black curve is the actual response using a continuous logarithmic sweep and the red curve is 1/3rd octave smoothed. Response curves were swept at 2m and 4m with similar results with exception of approximately 6 dB and 12 dB drops due to distance, respectively. While that is correct in a non-reverberant field (free space or anechoic chamber) it is subject to a small reflection from the ground, ergo the insertion of the word, ‘approximately’.

7 (Zimp) Impedance curves of both units in wool stuffed cabinets.

8 (LRmResp) Response in my living room. The black trace is an actual response, without equalization, of the room using LMS. The peaks are normal in a reverberant field, due to reflections from any hard surface. The red trace is the black one smoothed to 1/3rd octave. It shows a response linear within 10 dB which is acceptable and better than most. The peak at 35hz is a perk; the one at 80hz is due to the room dimensions, about 15 by 17 with an 8 feet high ceiling. The dips at 60 and 120 are also due to dimensions. Also, the room is almost square, an acoustical no-no. The 8 ft. ceiling is also close to half the other two dimensions. Even numbered dimension ratios are not good. The high end response is flatter than that which is indicative of the actual driver response. (see #6 DAYTON2) This is attributed to wall to wall carpets, plush velour sofa, large armchair and heavy drapes on the window wall.

The LMS system uses two first order filters, each with a Q of 1 which can be cascaded to make a second order filter. It is claimed by the manufacturer that the noise floor can be reduced by 30 to 40 dB. This was verified many times, the most recent being Dec. 10, 2013. The noise floor (baseline) was found to be -35 dB, +/- 5 dB. Subtracting the noise floor curve from the frequency response curve produced the curves shown. Little to no difference was noticed between the curves above 150 hz., below which an increasing difference of several dB was noticed. This is attributed to ambient low frequency noise of vehicles on a main street about 1/4 mile away. That theory was verified by running another baseline sweep around 1 in the morning.