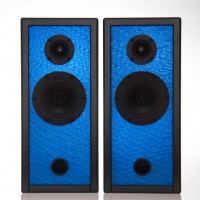 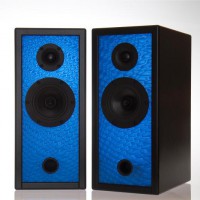 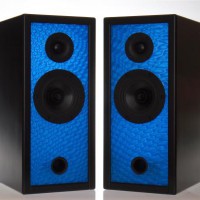 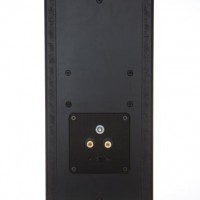 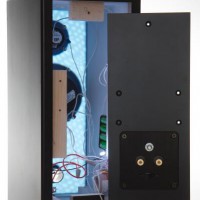 Driver Selection
I first started looking at Tang Band’s 4″ or 5″ underhung mid-bass drivers, but they seemed too heavy and expensive for my situation. I then decided to go with the Dayton Audio 5″ Reference Series woofer. The Dayton Audio drivers appeared to work well within my constraints. As for deciding on a tweeter, I wanted a small driver with high performance that would work well with a low crossover point. My only real option was a neodymium tweeter, and I wanted the price to be under $20. I noticed Vifa/Peerless had a line of tweeters within my price range. I was going to use the square version until I thought about how hard it would be to mount one. In the end I chose the Vifa/Peerless BC255SC06. This ended up to be a good driver for my situation.

Enclosure Design
My calculations determined I needed a 0.4 cubic foot box. From experience listening to an earlier set of speakers that I built using only 1/4″ MDF, I realized a 3/4″ wall thickness would be required. I first imagined lights that would move to the music in a little panel, but then decided to build the entire front out of frosted 1/2″ acrylic plastic with a film covering. The blue film (Rowlux Illusion Film) provides a unique 3-D look, almost like moving water; this is why I named these speakers Indigo Waves.

Amplifier/Crossover Configuration
For the crossover, I decided on a simple design to maximize audio clarity. I also selected a low crossover point of only 2000 Hz, believing a lower crossover is better whenever it’s possible. I made a 1st order crossover with a 5 dB L-pad on the tweeter. The speaker is 4 ohms, which is less than ideal for most amplifiers such as my 6-16 ohm amp, but gives it an efficiency of about 90 dB per watt.

Enclosure Assembly
The back and sides of the enclosure were made from 3/4″ MDF. After cutting all pieces to size, I cut a 5/8″ groove in the top, bottom, and sides to hold the plastic front. Next, I glued the top and sides together then added pieces of wood on the inside so the back and bottom could be screwed in. Once the box was built the inside was painted white, along with most internal components (to reflect the light better). The LEDs were aimed towards the back to diffuse the source. Finally, the outside was painted with primer and sanded until smooth then sprayed with a final coat of black satin paint. I decided to use four rechargeable AA batteries to power the five LED lights, but I knew that this would be too much voltage for the LEDs. I had previous experience with the perfect chip, the LM317, an adjustable voltage regulator. It’s an easy-to-use chip and the voltage is adjusted easily by the ratio between the two resistors.

Conclusion
These speakers were a great build. It’s fun to show them off in a darkened room—people are always amazed at their looks and sound. The highs are detailed and clean. The amount of bass is limited, but when matched with a subwoofer you get a detailed, full-range system.

About The Designer
Brandon Aitken finished 7th grade shortly before beginning the creation of his second speaker design, Indigo Waves. During construction of the speakers he turned 13 years old. Brandon used his enjoyment of electronics to help create the lighting and crossover circuits. He also enjoys woodworking and just finished a subwoofer project from components he bought at the 2011 Parts Express Warehouse Tent Sale.