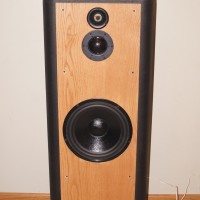 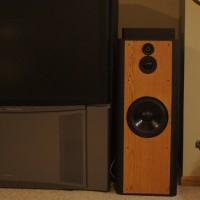 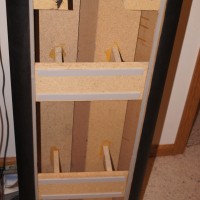 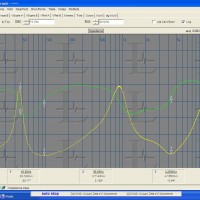 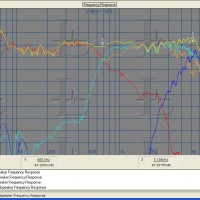 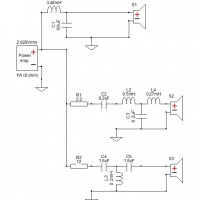 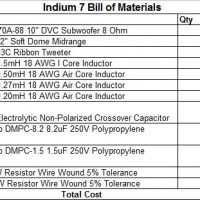 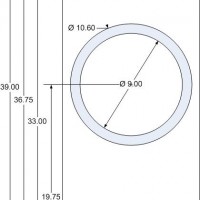 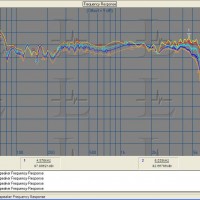 Project Description:
I’m sure this is the case for many of us… The inspiration for some of my audio projects and acquisitions involves things I wished I could have either afforded or accommodated “back in the day”. I started scraping together audio equipment and perusing audio magazines back in the late 1970’s and early 80’s. My first major speaker upgrade from the cheap and loud 3-ways I purchased while in high school was a pair of Infinity RS-5000’s that I picked up in the late 80’s from an audio store that was going out of business.

The RS-5000’s had sealed bass that extended down into the 40’s (30’s in room) that always sounded better than it seemed like it should out of a cheap 10″ poly woofer. The EMIT tweeter was particularly impressive in how it could reproduce the sound of breaking glass – several times, while the TV was on, it fooled me into checking the windows in my apartment. The 3″ poly cone midrange was the weak link.

While I enjoyed my time (about 10 years) with the RS-5000’s, high on my wish list was always the Kappa series with the dome midranges and sleek cabinets (wide and shallow with big radiuses. When the InDIYana contest theme for 2016 was announced as “Widebodies”, the image of those Kappas immediately came to mind. The Indium 7 is a tribute to those.

Design Goals:
The goal is to create something with the basic form factor as the original Infinity Kappa series from the 1989-1991 time frame using similar, but modern, drivers. The target cost is $300 for drivers and crossovers to keep the project affordable.

Driver Selection:
Tweeter: The original Kappa series had a vertical planar tweeter that was relatively short. The BG Neo3PDR was essentially a better version, but is NLA. The other planars that PE carries are considerably longer than the original EMIT, which will negatively impact vertical dispersion. The later .1 versions of the Kappa used the EMIT-R, which was quite similar to the Beston RT-003C – so that is the tweeter of choice for this project.

Midrange: The Kappa series all had 3″ poly dome midranges. The Kappa 8 and 9 also included a larger “polygraph” midbass coupler – also a dome. The only dome midrange offerings at PE are currently 2″ – so that pretty much forces this project into a Kappa 7 clone with a 2″ dome midrange and a subsequent need to play the woofer up pretty high to cross to that dome. The 2″ dome options are the Dayton classic dome, Dayton RS dome, HiVi DMN-A, and the Morel MDM-55 (and the further upscale elite version). The MDM-55 is a known performer, but was ruled out in an effort to hold to a driver and crossover cost around $300. I’ve heard the RS dome a number of times, it has strengths and weaknesses, but I really didn’t think it would be a good fit for this project with its somewhat vintage theme. That leaves the HiVi and the Dayton Classic. I don’t recall seeing a project with the HiVi dome and am a little more intrigued by its potential than th e Dayton Classic. The DMN-A is used in an Italian open baffle hybrid speaker called the Ballerina, where it was crossed around 800 Hz and was favorably reviewed by 6 moons. I always take such reviews with a healthy dose of salt, but that at least gave me confidence that it could get to a viable crossover point. There are other reports that people had used these to replace Dynaudio domes with good results, so that gives me some further assurance that this will perform appropriately for this project. HiVi DMN-A it is…..

Woofer: Cost constraints along with the required crossover point around 800 Hz and a desire to have sealed bass with f3 below 50 Hz narrows the field. The crossover point suggests that a 10″ woofer would be a better solution than a 12. In order to fit into budget, the cost should be around $50 or less. Several Dayton drivers are good candidates: Classic, Aluminum, DVC. Of the three, the DVC is pretty smooth out to around 2kHz, has the right look, and has acceptable inductance when the coils are paralleled. So, the Dayton 10″ DVC is the choice. Even though it is marketed as a subwoofer, its specs suggest that it is really a woofer that happens to have dual voice coils.

Enclosure Design:
I really don’t have the tools or expertise to create the large roundovers used in the original Kappa series. My coworker and fellow speaker builder Scott P. (who goes by Lionheart on Techtalk) alerted me to Tapease in Wisconsin, who offers large wooden cylinders, half cylinders, and quarter cylinders. I chose 2″ MDF cabinet corners for all 4 corners to give a Kappa look and feel. The orignal Kappas had Oak sides and a black front, so I am going for an inverted look with an Oak Plywood baffle and black sides and back. The overall dimensions deviate somewhat from the original Kappa 7’s in order to comply with the Widebodies guidelines. Baffle width will be approximately 12″ and the side boards are just under 4″ wide, which gives overall width and depth of approximately 16″x8″ with the cabinet corners. The resulting asthetic effect is sort of a hybrid between the Kappa 7 and the larger 8 and 9. Height is about 3 9″, which is similar to the Kappa 7 and gives an internal volume around 50 liters, which the 10″ DVC likes.

Enclosure Assembly:
The midrange and tweeter have sealed backs, so they don’t require separate enclosures. The tweeter is also surface mount, so it doesn’t require a countersink. Therefore, the baffle is fairly simple to cut out. Using the 2″ cabinet corners does require some different construction techniques. I found the best method to be putting together the sides, front and back at the same time with the cabinet corners in place. Glue was applied to all joints except those touching the oak plywood baffle, which I wanted to keep removable. The assembly was “clamped” together using ratcheting tie straps. With the shell assembled, I added top and bottom end caps and then installed bracing made from 4″ wide 5/8″ thick particle board strips. The internal photo shows the bracing pattern. Threaded inserts were installed in the two cross braces in the front of the cabinet along with positions near the front corners in order to fasten the baffle. Weather stripping was used to ensure that the baffle sealed to the cabinet and to dampen any vibration.

Crossover Design:
The final crossover schematic is shown in the figures. The 10″ Dayton DVC really has smooth response out to 2kHz as the spec sheet indicates. I was able to get a smooth rolloff at about 700 Hz using a simple second order filter. The dome midrange matches up with the woofer using only a single cap. The crossover between the mid and tweeter is at around 5.5 kHz using third order filters The crossover includes a 2.2 ohm resistor before the midrange and a 12 ohm resistor before the tweeter to balance the sound pressure levels of the drivers. The resulting measured response is within about +/- 2 dB from the low frequency limit of my gated response measurement (about 300 Hz) to 20 kHz. Measured sensitivity is 86 dB with 2.83 V input at 1 meter. Off axis response is also smooth with no major discontinuities other than a narrow band dip around 6 kHz. In spite of the 4 ohm (with voice coils wired in parallel) subwoofer, impedance stays at or above 3.7 ohms throughout the audible frequency range, so it should not be as difficult a load for amplifiers as the big Kappas were.

Conclusion:
This project really exceeded expectations, both in terms of appearance and sound quality. The construction process using the cabinet corners was quite a bit different than anything I have attempted before, but the corners work well to provide a well-reinforced structure and create big roundovers that would be difficult to achieve by ordinary means. Before starting this project, I would not have guessed that the Dayton DVC sub would work well enough as a woofer to cross over to a 2″ dome midrange.

About the Designer:
Scott Sehlin lives in Bettendorf, Iowa with his wife and two sons. He is an Engineering Manager for a manufacturer of aerospace equipment and a member of the Parts Express Speaker Building Design Team.