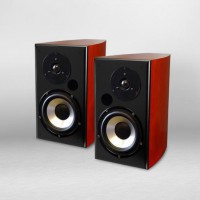 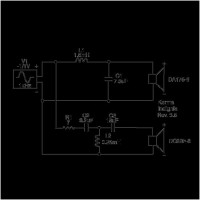 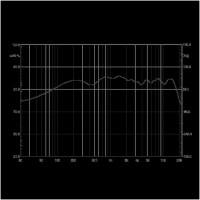 Driver Selection
This was truly a group design and driver selection was the biggest point of discussion. After talking out the pros and cons of several drivers and their fit into the chosen enclosure volume, we decided on the Dayton Audio DA175-8 aluminum cone woofer. According to our simulations this would give the best bass response and play high enough to meet an affordable tweeter. After the woofer was selected we looked at tweeters that were inexpensive, with a good looking response, and that would play low enough to “meet” the response of the woofer we selected. We needed to keep the crossover point fairly low to bury the breakup of the aluminum cone woofer. After looking at a host of tweeters, we settled on the Dayton Audio DC28F-8 silk dome 1-1/8″ tweeter.

Enclosure Design
With the enclosure volume already established the only task left in this area was porting. We decided on a 1.5″ port that is 8″ long that would yield a tuning frequency of 37 Hz. According to simulation this would give us an f3 of about 47 Hz. We wanted the front baffle to be uniform so that the crossover would not have to be modified for each build to account for baffle step or driver spacing. The Dayton Audio MB38 baffle blank was chosen as the standard, as that is what fits the Parts Express 0.38 cu. ft. cabinets. A matching magnetic grill is also available for a finished look. This is where each builder gets to add their personal flair. Some of these have been built using Dayton Audio curved sided cabinets. Some using a standard butt jointed MDF box, some with dowel construction. The only constraints are the volume and the baffle. Please note that the baffles should be mirror-imaged.

Amplifier/Crossover Configuration
After a few iterations, we arrived at a design using a 3rd order on the tweeter and 2nd order on the woofer at about 2000 Hz. This allowed the cone breakup of the woofer to be suppressed, and both drivers are comfortable playing at this frequency. We tried other approaches but this gave us the best response and phase agreement.

Conclusion
They sound great! They are very balanced with much richer bass than one would expect from a speaker/box this size. This speaker is clearly an “over achiever” and impresses all who have heard them thus far, regardless of their audio experience. A note about the name: this project came after a surge of interest in the Insignia NS-B2111 that have bounced around in price and are regarded by many as a great speaker for the money. After getting the basic design settled we figured we had not only a great speaker for the money, but a great speaker period. Someone proposed the name “Karma Indignia” and it stuck.

About The Designer
This was a group design project by members of Audio Karma (www.audiokarma.org). Audio Karma is a free online audio community for enthusiasts of music and audio gear. Its motto is “All Audio. No Attitude.” There were many people involved in the project, so naming names would inevitably lead to someone being left out. For the most part, the design team members only know each other by their screen names from their interaction in the Audio Karma on-line community. It is their common passion for DIY that ultimately brought them together from coast (Berkeley, CA) to coast (Atlanta, GA) and produced this excellent design. The entire design process can be followed here (note: only registered members can see all of the pictures, graphics, and images in the provided thread link): http://www.audiokarma.org/forums/showthread.php?t=160535. To date, 26 pairs have been documented in the thread. In memory of Zilch, RIP