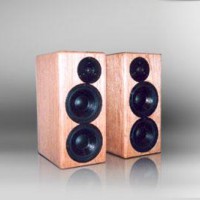 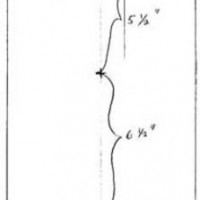 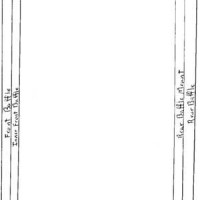 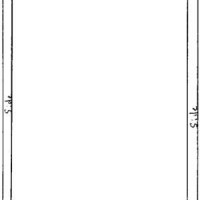 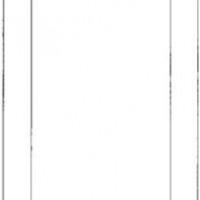 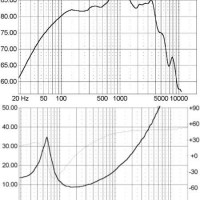 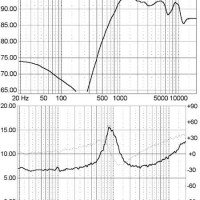 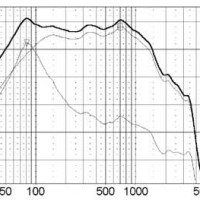 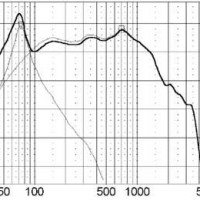 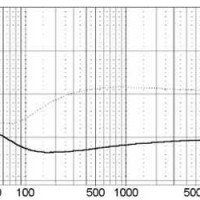 Driver Selection
There are tradeoffs to consider when trying to cover the spectrum with only 2 speakers. If I was going to do a ported design I could have chosen a woofer that wasn’t as strong with bass. Though the Dayton woofers have good bass capabilities, they also have some weaknesses. Unlike the woofer response illustrated in the next section, the woofers I purchased, exhibit a dip or lull around 1.5 kHz., so they cannot be crossed high. Fortunately, the Dayton silk tweeter has a low Fs and can be crossed as low as 2 kHz. Since it is being padded down to reach the target system response of 82 dB, I was able to cross at 1.5 kHz and nullify the dip in the woofer’s response. Considering other possibilities, most of the woofers I looked at in the next price category up, can be crossed higher, but just don’t have the bass capability that this woofer has per the size box I wanted use. The Vifa P17J woofer could have been used without sacrificing any bass, but the box would have been nearly twice as large. One of my goals was to produce deep clean bass from a small box (under 1 cft.). The Dayton drivers are also inexpensive, which was enticing to a novice such as myself. In my opinion, they produce excellent sound for their price category and had some strengths to meet my requirements that more expensive drivers did not have.

Amplifier/Crossover Configuration
To fully understand the problem description, it is essential to be familiar with the drivers response and their impedance. Since I did not have a measurement capability when I began this project, I had to rely on others. PE Paul graciously gave me his measurements of the Dayton 6 1/2″ woofer. Paul measured the woofer in a box with the same baffle width, but larger volume. The SPL response in the bass region is not as critical to this design as the impedance for the size box used. Before I could finish this project, I had to measure the impedance in the actual box. I finished the project using a measurement taken by Dennis Murphy for me in my test box at DIY DC 2001. Paul’s SPL response and my impedance are shown below. Dennis Murphy also very kindly measured my tweeter at DIY DC 2001 in my test box. The project was difficult because of my dependence on others for measurements. Eventually, one of my silk tweeters went bad. Parts Express replaced it with a generation 3 tweeter. So I bought a second and switched to the project to the generation 3 tweeters. I got a measurement of that from PE Paul. The final outcome was close to what I modeled, but I had to interpret my model differently to get the desired results. I won’t elaborate, but will state that a mic preamp for SPL measurements is now at the top of my list. Rather than show every measurement I’ve looked at and used, I will use the ones above and will make a note of the final results where they are posted. My goal was to extend the bass by adding a second woofer to obtain a 6 dB gain and then throw away the extra SPL gained in the mid and high frequency range. There are two approaches I could have taken. First, I could have created a single crossover for both woofers that would have attenuated their mids and highs. This crossover would have been built around a large inductor with a resistor in parallel (something like 4 mH and 1.5 ohm). The second approach was to attenuate the lower woofer (the .5S woofer) and let the main woofer run full range to the crossover with the tweeter. This crossover would be built around an even larger inductor (8 mH). Both approaches had advantages and disadvantages. They also shared a significant challenge – the changing impedance close to the impedance peak at Fc. The first approach had a smaller inductor, but a larger cap and the mids would have gone through a resistor. It would have also required an MTM design to place the woofers equal distant CTC from the tweeter. The second approach has a larger inductor, but a smaller cap and no resistor for the mids. I chose the second approach. The problem with impedance arises from the need to begin attenuating response in the range where the impedance is changing rapidly. As can be seen in the woofer’s impedance graph, the impedance is changing rapidly below 100 Hz. The degree of significance of the changing impedance was not apparent to me when I first began. My initial thought was that I would use a large inductor and live with the “little” hump that would result from the impedance. The following graph illustrates the fallacy of this thought. I modeled a 24 mH inductor on the .5 woofer and a crossover on the main woofer. The target system response is around 82 dB. Ideally, the system response would follow the response of the main woofer down to 150 Hz. then continue at 82 dB down to 60 Hz. Two problems show up with this graph. First, the 6 dB rolloff doesn’t attenuate the .5 woofer enough and it contributes to the system response all the way up. (This problem is addressed in the Crossover section.) This could be improved a bit with an 8 ohm-47 uF cap zobel, but not enough. The second problem is the .5 woofer is not attenuated enough at the impedance peak and the inductor is already too big. It is starting to attenuate the response on the lower side of the impedance peak – attenuating the bass that I am trying to get. The next step is to use a 2nd order crossover on the .5 woofer instead of a 1st order, but this makes the problem worse. The graph below shows the effect on a L-R 2nd order crossover at 100 Hz. using an impedance of 8 ohm (25.4 mH and 99.5 uF). The 2nd order crossover does attenuate the response in the mid range, but it also changes the phase and begins to detract from the response of the main woofer. Also, for some strange reason, the peak is actually higher than it was before (87 dB instead of 85 dB). Alas, I had to admit to myself, there is no getting around the impedance peak – I had to do something about it. My first attempt to address this was to calculate an LCR circuit to flatten the impedance, but this would have been too expensive. I came up with a compromise that is a little less expensive – but still not as cheap as I would like. It required a large cap and resistor in a “zobel like” arrangement. By paralleling the .5 woofer with an 830 uF cap (yes, you read it correctly) and a 5 ohm resistor (two 10 ohm 20 watt in parallel), I was able to get the following impedance curve. There is still some change below 100 Hz., but it is much less significant. It is smooth enough to create a crossover for the .5S woofer. The impedance dips to 3.25 at 150 Hz., but this will change when the attenuation components are added.

Conclusion
After the first stage of tweaking, Mike Keenan and I compared the UBTs to several speakers he has and they compared very well. The muddiness that was present in the midrange earlier was gone and they presented a very clear image. Now after the second, third, fourth, fifth …, rounds of tweaking, it is finished and I am very happy with the midrange. They have been improved significantly from my first crossover. I have finally padded down the highs enough and they are pleasantly sweet. The bass was good from the start. It can be felt in the floor – it is strong, clean and accurate. The sound of an acoustic standup bass is exciting. Getting an accurate measure of bass response is difficult because of room space and reflections. Using Paul’s measurement of the woofer, F3 is predicted around 45 Hz. Using the LspCAD box tool, F3 is predicted closer to 42 Hz. I created a CD with test tones (sine waves) spaced at 1/6th of an octave apart from 20 Hz. to 20 kHz. Based on subjective listening tests, I believe F3 is between 40 and 45 Hz (40 Hz. is where I could detect a difference first). Paul’s measurement was taken in a 4 pi setting. Since the UBTs are a sealed box design and are placed close to the wall (more like a 2 pi setting), there is more bass than what would be assumed or predicted from the measurement. When comparing the UBTs to the DIIIs, a speaker with a known F3 below 40 Hz., Mike and I found the UBTs to have bass nearly as deep, but not quite. This comparison was replicated later with Brent Langdon’s DIIIs. It is also possible that the shallow rolloff is creating an illusion that there is no loss in bass beyond the actual F3. Lest it be forgotten, though the UBTs are nearly as deep as the DIIIs, the cost to get that bass from a sealed design is 6 dB of efficiency. As stated above, this is a tradeoff I can live with easily. They are as sensitive as the Dayton IIs and the BR1s. Anyone considering this project would need to decide for themselves if the sealed bass sound is worth the extra cost. The .5 woofers account for about $76 of the project. If the boxes were made a little smaller (.6 cft.) and a 1.5″ D x 4″ L port were used, the f3 would be a little deeper. From my perspective, I like sealed bass. It sounds natural to me. I concluded that I couldn’t build a sealed sub that could blend in as well and do what the two .5 woofers do for anything close to $76, so it’s a good tradeoff to me. Needless to say, I’m very pleased with the outcome of this project.

About The Designer
This project was submitted by the venerable KenA, a frequenter of the Tech Talk board. Look for him there with questions.