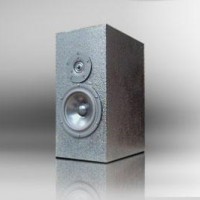 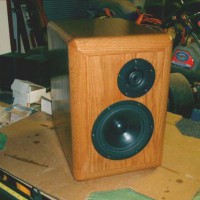 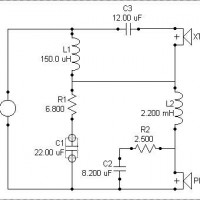 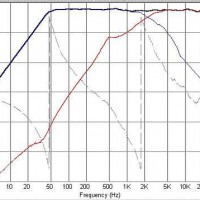 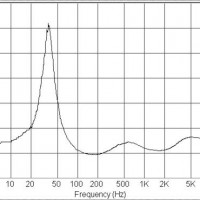 Driver Selection
The Vifa XT25TG30-04 1″ Dual Concentric Dome Tweeter features a patented dual concentric diaphragm and a unique wave guide center plug which provides an excellent on and off axis response. This tweeter is known for having a very “natural” sound with an extremely smooth frequency response that extends well beyond the human hearing range. The Vifa PL woofers were designed without compromise and feature a specially coated paper cone, Non Resonant Suspension Coupling (NRSC) system, long linear excursion, and a vented pole piece. The gold plated terminals and heavy-duty cast magnesium frames make these drivers attractive choices for moderate to high-power audio systems. Project Edit: Due to the discontinuation of the Vifa PL woofers, the Aurum Cantus AC-180F1 7″ woofer has been substituted. This change should yield in a more bass heavy, “warmer”, sound.

Enclosure Design
The enclosure is the simple to build Parts Express .55 ft^3 MDF box kit glued together with Titebond. The finish is two coats of Duraliner truckbed liner, rolled on with a 3″ trim roller. The box is tuned with a 2″x7″ PVC duct mounted on the back, 1/3 of the way down from the top. It’s lined with a compressed layer of 2″ thick pink fiberglass, available in 16″x48″ packages from Home Depot. Eggcrate foam can be used as well. The PL18 woofer will work in a variety of enclosures up to about 1 ft^3 but tuning should be adjusted if the box volume is altered. Don’t make the baffle too wide or you’ll throw off the baffle step compensation built into the circuit and will need to adjust L2. The crossover will otherwise work fine but it’s recommended that the resistor R1 be adjusted to your ear, and can be adjusted over a range of 5 ohms to 7.5 ohms. A lower value will raise the level of the treble balance and a higher value will reduce the treble and you can feel free to adjust this to taste or use it as is. Project Edit: The Dayton Audio TWC-0.50BK enclosure has been substituted since the .55 ft^3 knock down cabinet is no longer available. Using the Aurum Cantus AC-180F1 7″ woofer in this enclosure, sealed, yields a more transient accurate Qtc of 0.525. The f3 seems high, being at 97.5 Hz, however the f10 is a respectable 43 Hz meaning low bass extension in-room will be more than adequate. Using the recommended port in the parts list yields an f3 58 Hz, and a box tuning frequency of 44 Hz.

Amplifier/Crossover Configuration
There was upon extended listening, however, a bit of high frequency breakup at 5khz characterized by a glare to the sound caused by the Vifa PL18 woofer rolling off too shallow. John Kreskovsky, the resident crossover guru at the MAD board, sent me an alternative circuit to try. It added a capacitor in series with the tweeter and a damping RC shunt across the woofer, resulting in what amounts to a second order series crossover. It yielded a second order rolloff for the tweeter and a damped second order rolloff (or third order if you think about it) for the woofer. It also allowed a range of adjustment to taste in the level of the tweeter and worked well with slight errors in acoustic offset of the drivers, allowing for some leeway in tweeter mounting. I built John’s suggested crossover and made adjustments by ear to C2, C3, R1 and R2 to come up with the final crossover after several days of tweaking. The actual crossover frequency is 2.3khz, which is about the limit of the XT25 unless higher order slopes are used. Warning: If the value drops below 5 ohms the overall impedance of the system will drop to dangerous levels so use caution when adjusting this resistor. Keep in mind that this is a series crossover and everything is in the actual signal path from positive in to amp return. Because of this, all parts should be of excellent quality and all solder joints must be tight. It is also highly recommended that all caps be bypassed with a good quality bypass cap such as the Audiocap Theta. There should also be no substitutes for the chokes unless EXACT values for inductance and DCR can be found. This is not an inexpensive or budget system but a pair can be built for around $500. All parts are available from Parts Express. Crossover Notes: Parallel the 12.5 ohm and 15 ohm resistors to get the 6.8 ohm value I used. Parallel the 2 uf and 20 uf caps to get the 22 uf value needed. Your favorite brand of capacitor can be used instead of any of the above but NO electrolytics. Both drivers need to be wired with POSITIVE polarity per the schematic.

Conclusion
Special Thanks To:
– Peter Thomsen of Acoustic Reality in Denmark for the initial crossover idea.
– John Kreskovsky for his assistance with the final crossover.
– Dan Carroll for helping give this project a name.
– Andy Graddon of Australia for keeping series crossovers alive.