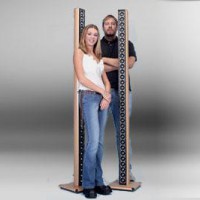 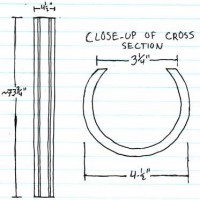 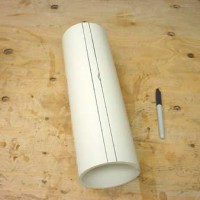 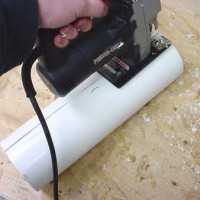 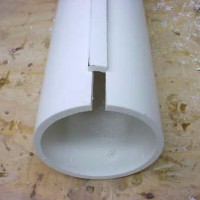 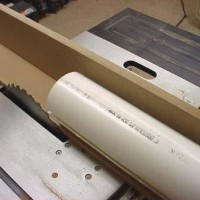 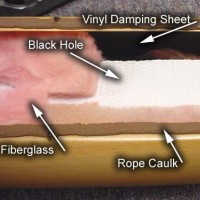 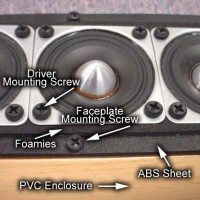 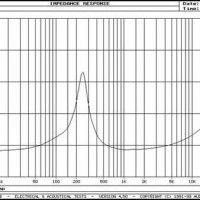 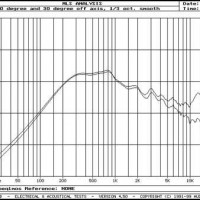 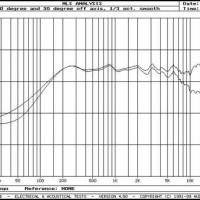 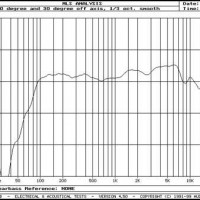 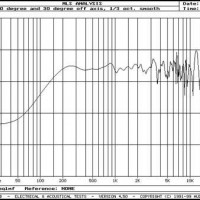 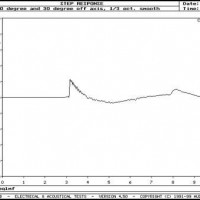 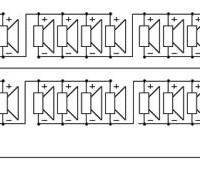 Driver Selection
A small 2″ drive unit useable as a mid-tweeter or extended-range midbass. Features include a black PPM cone, sturdy silver plastic basket, solid aluminum phase plug, shielded neodymium motor, s-shaped surround, and venting under the spider. Great for A/V, multimedia, and automotive use. Edit #1: Project edit: Due to current stock, the Tang Band W2-880S has been removed from the Parts List and is substituted with the Tang Band W2-803SM. The main difference between these two drivers is that the W2-803SM has a nominal 4-ohm impedance. The wiring diagram has been updated, and the final impedance is now a nominal 8-ohm load.

Enclosure Design
The enclosure was conceptualized using several key requirements: 1. A very small footprint to maximize the aesthetic effect of the line array, 2. Not wanting to build yet another square MDF box. The result of my searching for a new and interesting cabinet construction method was to use standard PVC schedule 40 pipe. Ideally the cabinet volume should be greater than that provided by a 4″ PVC pipe, but I decided to use it anyways. There were several reasons for this choice: 4″ PVC is less expensive, would be easier to cut, and would provide greater aesthetic effect. Plus my intent to use active equalization would mean I could adjust for any peaking that may occur due to an undersized box. To be able to mount the drivers to this PVC pipe, I decided that I needed a special mounting system. The drivers would be mounted onto their own faceplates, and then the whole faceplate could be attached to the PVC pipe. This required that a chord be sliced running the length of the pipe. From here, some endcaps would be placed on the ends, and a base would be attached.

Amplifier/Crossover Configuration
As this design was conceptualized to be used with an active equalizer, a standard passive crossover was not used. The equalizer that was used was a standard 15-band 12 dB graphic equalizer. The main corrections that needed to be handled by the EQ were boosting of the bass, and boosting of the top end. The midbass hump is a result of the small drivers with a high Fs and a correspondingly high box resonance frequency. Bass boost in the 50-120Hz region helped to fill-in the low end, and improve integration to the sub. While the drivers do have good extension up to 18K or so on their own, in a line array situation the high frequency boost helped to overcome comb filtering effects. Nominal Impedance is a healthy 4 ohms, and doesn’t dip below about 3.5 ohms anywhere. With all of the stuffing in the enclosure, the Q is not particularly high. Indeed, I believe it is actually less than .701. The frequency response is somewhat drooping without any EQ. This overall decreasing response must be an effect of the multi-driver integration, as a single driver does not show this drooping response at all. Because of the comb filtering effects at high frequencies, the F.R. graphs have been 1/3 octave smoothed. With the active equalizer in place, the top end is brought up back in line with the rest of the response. Notice that the off-axis performance at 30 degrees is not particularly poor. The nearfield measurement was used to show the effective bass output of the system. With the EQ in place, the F3 point can be manipulated to below 100 Hz. This works well for small rooms and low listening levels, but for high output situations, a slightly higher low-frequency cutoff is recommended. Just for informational purposes, the frequency response without smoothing. The jagged response that begins at 5K and worsens at higher frequencies is result of comb filtering, a very real measured problem. The step response of the system–note the single large step. This shows good phase coherency within the speaker. Unfortunately, the jagged nature of the step reflects the different arrival times of the impulse from varying driver distances.

Conclusion
Overall, the speakers are very good sounding, though it definitely sounds different than your standard 2-way bookshelf speaker. The sound is very large, with a good sense of soundstage width and height. I would say that they have a “live” sound, which is great for rock and similar music. They definitely can play loud and clean when mated with the appropriate subwoofer. Because of the non-tapered line, they great in situations where listening is not occuring precisely in one location, particularly in the vertical plane. This makes them perfect “party speakers” or speakers for the person who listens to music while they do other things. For an audiophile-sort who likes to sit in his sweet spot and sip brandy, these probably aren’t the best choice. It was described at DIY2002 Dayton that the imaging was a little loosey-goosey. However, I found from my experimentations that there was a solid image when seated precisely between the speakers, but the sweet spot is rather small. Several people noted that the high-frequency reproduction lacked some “life” and “air”. This could be attributed to the comb filtering problems that definitely were occuring. However, this also could be a result of the high-frequency capabilities of this particular driver, it is hard to say for sure. Whatever the reason, for pure audiophile use I would consider these lines to be slightly less “refined” and “articulate” than many standard speakers. One of the other key aspects of this setup is the proper subwoofer integration. Because of the fairly high crossover point the proper crossover frequency on the sub and the relative level can make or break the sound. When everything is dialed-in correctly, the transition from sub to satellite can be quite good, however it does take some tweaking to achieve a good integration. The results of this experiment definitely show the capability of using small and/or low excursion drivers successfully in a line array situation. However, it does illustrate the potential problems of center-to-center spacing in high-frequency performance. Comb filtering is a definitely a legitimate issue. With regards to power-tapering vs. not power-tapering, I am still somewhat up in the air. While tapering may help to solidify the image, it does take away from the “sound is coming from directly in front of you” effect.

About The Designer
This project was submitted by Darren Kuzma. He frequents the Tech Talk board, so feel free to post there with any questions about this design.