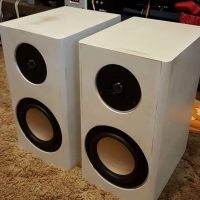 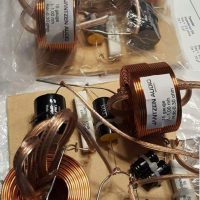 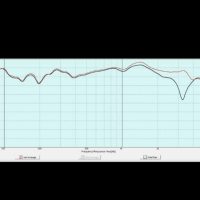 Project Description:
I used the Denovo enclosure, the plan was just a two way design with the plan to use them alone or as fronts in surround sound. I used the DC28F-8 Dayton Audio tweeter and the HiVi M6N. They both have a sensitivity of 89 dB so they would be a good match and not require an l-pad to balance the tweeter. When I modeled it in BassBox I got an ideal volume for a ported setup similar to the 0.56 cubic foot boxes if I did not use polyfill so that is what I went with in this case. I tuned the port to 36 Hz. for the smoothest response. On paper I would have a roll off at 61 Hz for the F3 in with the M6N.

Design Goals:
I intended this to go with a turntable and a small subwoofer, but was so happy that in the end I have used them as my front channels for a 5.1 channel surround sound system.

Enclosure Assembly:
The knockdown boxes are simple to put together. I ended up finishing them in white, the most complete image with this is just before the final coat.

Crossover Design:
I chose a crossover point of 2000 Hz, Linkwitz-Riley, 2nd order. And I did use a Zobel for the woofer to help smooth it out. I ran into some cone break up in the range of 1000-2000 Hz that became a hump in the response with my crossover point. So in the end i added a notch filter as well to target 1500 Hz and take the edge off the mid-range.

Tips & Tricks:
In my case I found the tweeter did not need to be out of phase for the second order crossover. Acoustic results varied form the planned design when tested with the Omnimic and I had a dip at 10 KHz like it was out of phase. I verified that I had them wired correctly and then rewired to normal polarity and found the dip disappeared. The response chart is before and after i made that change.

Conclusion:
Happy with the results overall. I would have put the tweeter a bit closer to the woofer if I had to do it over, but with the room they are in the stereo imaging was not really impacted nor the perceived center point of the speaker box. I found the lows better than a set of old Sony towers I used for my surround sound so I swapped them out. After breaking in the woofers I find that they are meeting the goal for low end, but now that I have them in surround sound that is less important. I was so happy with the tweeter’s sound that I swapped out the tweeter in my center channel with the same model to have a more cohesive sound in my front three speakers.

About the Designer:
I have been a technical adviser for Parts Express for nearly 5 years.