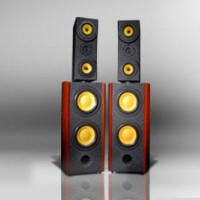 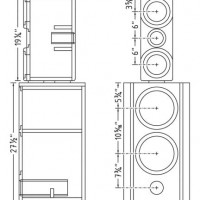 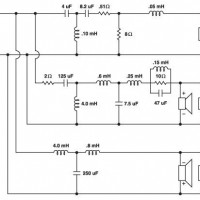 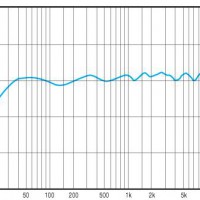 Driver Selection
I thought first about an MTM design with 5″ or 6″ midbasses, and a decent tweeter. Since I wasn’t looking for any typical teenage low-end, my woofer selection was basically anything Parts Express carried. I have used Peerless, Dayton, and many other woofers before and was familiar with their sound, but I wanted something new. Hi-Vi was next on my list; I had heard a lot of good feedback about their products from my time on the phones as a tech at PE. Based on my experience actually hearing the F5 drivers in a setup a few months back, I decided they would do the job for bass/midrange. Right about the time I started the crossover design, I wandered through the Project Showcase and came across Vince’s VHT system. The standard D’Appolito design I originally thought of just got a little more complicated. I had two reasons for selecting the Hi-Vi D8G as the woofer: first, the surround on the D8G looks a little more treated and potentially more immune to dry-rot than its brother, the D8.8, and second, the overall appearance would be a lot better with all yellow cones complementing the cherry vinyl I was planning to use. The last driver to choose was the tweeter. I needed something that had a relatively low Fs but would maintain a high efficiency (around 92-93 dB). The Vifa DX25TG- 05-04 was pretty intimidating at first glance, and after consulting with Darren Kuzma, I decided to try the XT25TG30-04 instead. With an Fs around 500Hz and a 91.5 dB sensitivity, it looked very suitable-and best of all, I hadn’t used it before.

Enclosure Design
The new enclosures for this design are more complicated than any I’ve yet built. Each speaker utilizes two separate enclosures, like the originals, but in this case they are actually separated from each other. The upper MTM cabinet is simply a vented bookshelf speaker that is separated from the lower cabinet by using two 3″ diameter PVC tubes that are 1-1/2″ long and bolted through the center. I thought I would go all out and try to time-align everything, so the woofers use a 1-1/2″ baffle, where as the tweeter is set back 3/4″ My main goal in this new design was to measure the woofers I had, and build the perfect-sized enclosure for them. In this case, it was about 2.1 cu. ft. after subtracting driver displacement. An 11″ long 3″ diameter port would yield an F3 of about 37 Hz. This was originally going to be a typical rectangular prism with double-thick walls, until I remembered a design that Zaph had used for a couple of wall-mount Aura speakers he built. He used a wood bending technique that I thought was very cool and not too difficult to try, so I drew a curved-wall design in AutoCAD. The curved-wall version looks better, and also helps to make the cabinet stronger-doublethick walls are no longer required. The top and bottom plates would be double-thick however, and there’s also extensive internal bracing. The finished result is a woofer cabinet that weighs close to 50 lbs. empty, and has almost no wall resonance.

Amplifier/Crossover Configuration
The credit for this crossover design goes to Mike Van Den Broeck from PE. Thanks to Mike for taking time out of his busy week to help me out. Due to the unusual baffle design in this project the crossover is a little on the extreme side, with eighteen components per speaker. The nature of the tweeter placement caused a huge null at 3kHz, and after playing around with it, we realized that a much higher mid-to-high crossover point was needed to eliminate this problem. This was, however, the biggest problem we came across. The XT25 and the D8G both use a third-order filter, while the F5 uses a second-order and a notch filter to help decrease the natural 1.4kHz peak. After a few days of getting lost in caps, coils, and alligator clip test leads, we measured it one last time and it was perfect. I used standard 18-20 gauge Jantzen air core inductors, and Dayton caps and resistors.

Conclusion
“These are the best sounding speakers I’ve heard up here,” to quote PE Product Manager Brian Myers after he evaluated them in the listening room. I couldn’t agree more. Using an Usher test track CD, vocals are reproduced beautifully, and while listening to jazz, you feel like you’re there. I remember one piano track where I actually heard the pianist manipulate the pedals with his feet in the background during a short pause in the number. The soundstage literally surrounds you and the kick of the bass drum pounds your chest, but is not overbearing. Oh, and these will get LOUD. The test components used were the modular Audio Source preamp and two 5.3A monoblocks. With an average sensitivity of around 90 dB, as little as ten watts will send you running for the door, but in a good way. Standing side by side, Brian and I were yelling to communicate but the speakers never blinked. We tried finding flaws in the sound but they just aren’t there. I definitely feel that these are the nicest speakers I have built, both visually and sonically.

About The Designer
Matt Phillips has been an audio enthusiast for many years. His fascination with cutting-edge products and concepts has been strong ever since the beginning of his speakerbuilding hobby. Building on experience gained from working at Parts Express, he continues to explore new concepts and applications. Currently employed as a security and IP based surveillance technician, his love for technology is still growing. Matt’s other interests include woodworking, toying with RC cars, drumming for his local church’s praise band, and going to the shooting range.