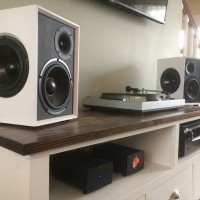 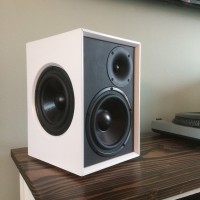 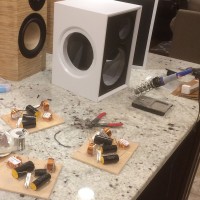 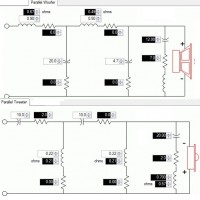 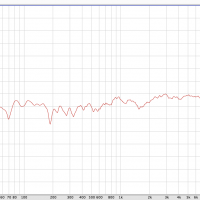 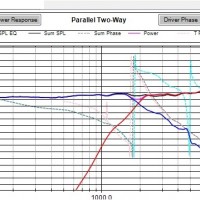 Project Description:
The MTAs are More Than Able to fill a room with sound. This two way bookshelf speaker utilizes a 6.5″ Dayton aluminum mid-woofer and a Dayton waveguided dome tweeter. Their lower end frequency range is extended with two Dayton 6.5″ passive radiators(one on each side).

Design Goals:
I wanted to design a mini-monitor capable of reproducing the majority of frequency range. I also wanted them to have a relatively wide dispersion as not to limit the “sweet spot” to a single couch cushion. The use of double passive radiators provides a force-canceling effect.

Driver Selection:
I have had great results using Dayton drivers in the past. For this build, I intended on modeling the crossover using WinPCD. Dayton provides the necessary FRD and ZMA files for most of their drivers to accurately design the crossover ahead of time. The new 6.5″ Aluminum Designer Series Woofer(DSA175-8) had the appropriate upper frequency extension while modeling well in a relatively small “ported” enclosure. The Dayton Waveguide Neo Dome Tweeter(ND25FW-4) is an inexpensive choice and had the wide dispersion i was looking for. Lastly, the 6.5″ Dayton Passive Radiators(SD175-PR) were the only choice to match the aesthetics of the Designer Series active woofer. The passive radiators were tuned to ~50Hz with the addition of three 3/16″ (1 1/4″ OD) fender washers each.

Enclosure Design:
The enclosure is Denovo Audio knock-down MDF 0.23 cu. ft. mini bookshelf speaker cabinet. The woofer is located centered on the front baffle and comes 1/4″ from the bottom. The tweeter flange is off-center and is 1/4″ from the top, side, and woofer flange. Each side of the enclosure has a passive radiator centered on it.

Enclosure Assembly:
The Denovo Audio flat pack enclosure went together flawlessly. I chose to flush mount the drivers on the front baffle but this was purely aesthetic. I also changed the look of the stock box by capping four sides with an additional layer of 1/2″ MDF. I cut them 1/2″ deeper than the cabinet and back chamfered the front inside edge for a modern look with a vintage feel. I mitered the panels then glued and clamped them in place. I flush mounted the passives in a 45* recess. I accomplished this with my Jasper Jig and a v-groove bit in my plunge router. I glued a 6″ x6″ piece of acoustic foam to the back and filled with polyfill for good measure. I finished the enclosure with sand-able primer and spray enamel. All of these changes in appearance are purely for looks. The stock Denovo Audio box would more than suffice as an appropriate enclosure.

Crossover Design:
WinPCD and the ZMA and FRD files from Dayton guided me to a fourth-order Linkwitz-Riley at 2000Hz. There is a Zobel on the woofer to flatten out its rising impedance. The tweeter has an LRC after the crossover to flatten the impedance peak at resonance. These two circuits allow the fourth-order components to function as predicted. In crossover schematic above, the inductor values are accompanied by their DC resistance. Those are not additional resistors. However, there is a 2ohm resistor just after the first capacitor on the tweeter high pass filter. Also, keep in mind that the polarity on the tweeter is reversed. I hot glued the woofer filter to the bottom of the enclosure and the tweeter filter to the top.

Conclusion:
To say that these speakers are “able” would be an understatement. They are More Than Able. They excelled way beyond my expectations. I thought I was going to get an acoustically flat monitor for a desktop or a small format two channel setup. What I got was a knock-your-socks-off, full size loudspeaker experience. The measurements were made using Room Eq Wizard and the Dayton Audio DTA-120 Class T Mini Amplifier at the listening position. If you look at the in-room response, with room gain, the bass extends down to 40Hz. The rising response wasn’t obtrusive either. The upper frequencies were delicate and easy to listen to for hours. Which we did. My father and I put them through their paces with a variety of sample tracks. We start easy with acoustic guitar, make our way through vocal jazz, and end up with full scale orchestral pieces. Imaging with the smaller format music was ever present, while the orchestral music was clear and well defined. As mentioned earlier, the MTAs are “More Than Able”.

About the Designer:
Grant Gustavsen is a member of the Speaker Building Design Team.