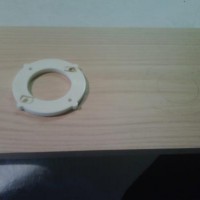 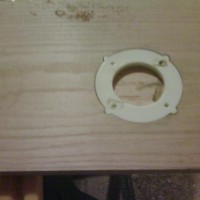 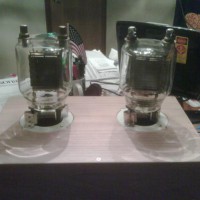 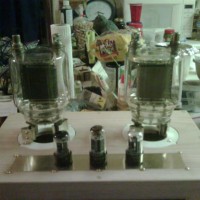 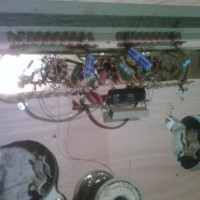 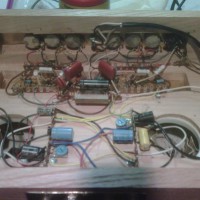 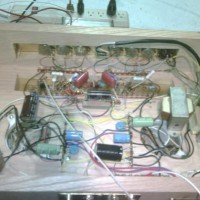 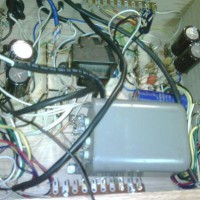 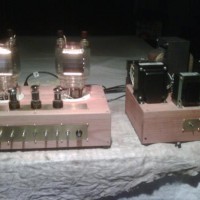 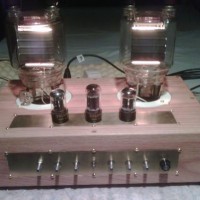 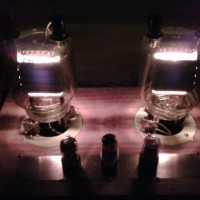 Overview
Years ago a nearby radio station replaced their transmitters and a friend who worked there rescued two of the spare unused 833 modulator tubes from the dumpster. He thought they were neat to look at but had no use for them so he gave them to me since I tinkered with Ham equipment. I politely accepted them but never built anything from them so they sat in a box on a shelf for most of 30 years next to many many other very old tubes. I always remembered the old radio sets I seen when I was young in my grandparent’s friends houses with the tubes mounted proudly on the top deck, the bright metal trim and the warm glow. So one day while sorting through my collection of tubes daydreaming of a project I found the 833’s and couldn’t think of anything else that would do it all like they would. As with those very very old radio sets, the base cabinet was made from wood. This cabinet base is made from red oak left over from a previous furniture project. The small tubes and controls are mounted directly to 3/16″ polished brass inlaid into the oak base. The oak is finished only with linseed oil. Aside from the two huge chunks of Hammond iron and a few capacitors the rest was from a 40+ year old accumulation of electronic components. The Power transformer delivers ~850 VDC at >1 Amp. The filament supply has two 10 volts at 10 Amps outputs. Because of the directly heated cathodes, the hum was unbearable using AC. Two [email protected] rectifiers were mounted to heat sinks on the back of the power supply base cabinet, filtered with 10,000 uf electrolytics and the output series with a 0.1 [email protected] resistor to keep the filaments from getting too hot. A second not quite so high of a high voltage transformer was added under the power supply base to power the preamp tubes. Here too the filament supply was rectified and filtered to reduce hum. A [email protected] transformer was used to supply the positive bias that would be needed to bring the 833’s into an optimum bias current range with the plates operating at +850VDC instead of normal >2,500VDC. Bias current is nominally set at ~190ma. the curve for the tubes also show that these tubes operate more like a pentode than a triode with the (+) bias. A pair of 6SN7’s function as the preamps and tone amps. They in turn drive a 6BL7 that drives the 833s. The cathode bias resistance is a resistor network that receives feedback from the output at its middle. I learned early on that the feedback on this is critical and must be tweaked for the speakers, so I built a set that is used just for this amp and the amp is mated to them. As for the sound… There is no way to describe it. Presence. Clarity. Detail. And bass excursions that the scope tells me are in excess of 60 Watts at about 4 to 5% second harmonic distortion. Oh… And it also serves as supplemental heat on cold winter nights curled up on the couch listening to it and enjoying the warm glow from the 100 watt filaments.

About The Designer
I am an engineer by profession who somehow ended up a water treatment guru instead of designing the latest generation Hemi or the fancy gadgets controlling it. Sometimes life finds you. Roll with it and enjoy it. It’s too short to let it pass you by.