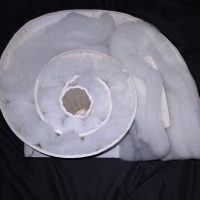 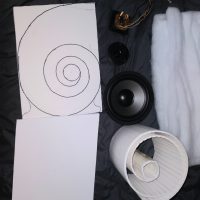 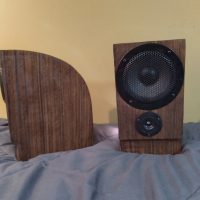 Project Description:
Speakers were built from foamcore with a 58″ Fibonacci spiral transmission line in a 12x9x7.5″ curved box covered in Mozambique veneer based on a design found on diyAudio by xrk971 They are progressively stuffed with polyfill.

Design Goals:
I was intrigued by the unique design and use of the unusual building material, as well as the quality sounds derived from inexpensive speakers. I was not prepared for the sound these speakers produced. They have a strong bass response to 45 Hz, and test down to 20 Hz. Total cost, minus shipping, was $16.00, plus the $2.85 for the foamcore and $16 for the veneer.

Tips & Tricks:
Go to diyAudio and the foamcore thread for plans. xrk971 is the guru for this, and for all foamcore enclosures. He recommends a combination of white glue and hot glue for assembly, and that works very well. Scoring the interior of the curve through the paper with a sharp razor knife aids making the spiral immeasurably, too, without creasing the outside, ruining its look. I didn’t see that step before I started, so I used spackling to build up the body to cover the bumps of the creases I made , which worked well, but made for an splotchy finish, hence the veneer. The original speaker called for is a 3.5″ full-range driver, the Tymphany TC9FD (264-1062 for 8 ohm, back order, or 264-1358 for 4 ohm), and the original width is 5.5″.

Conclusion:
The speakers were easy but a bit time-consuming to build, as they were my first such project, and I was modifying the original plans to compensate for a larger size speaker and adding a tweeter, because the original plans called for a full-range speaker and I had already bought the ones I used. The veneer added a lot to the looks, but doubled the cost of the project. I was very pleasantly surprised by the quality of sound from these speakers. The bass is outstanding, and the mids and highs are very natural. I can listen a long time with no fatigue.

About the Designer:
I am not the original designer. He is xrk971, on diyAudio, out of metro DC. He is a genius with foamcore, and has made several other foamcore designs, another of which I have also copied, with great success. I am a 75 year-old former F-15 mechanic who now hears jet-engine-sound tinnitus instead of the upper frequencies from my stereo, who loves to tinker and so made these as my second ever speakers.