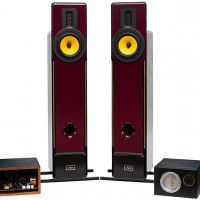 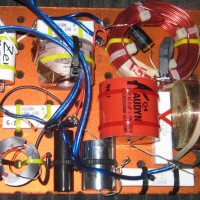 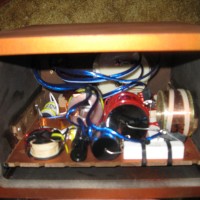 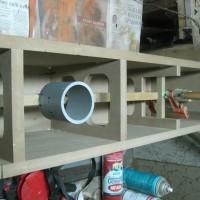 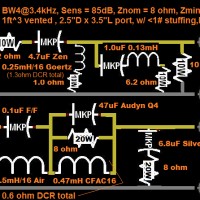 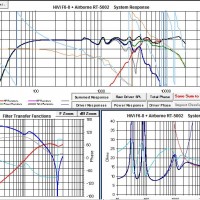 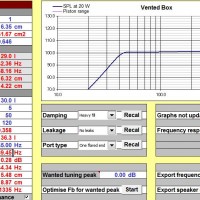 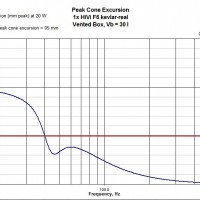 Project Description
This is a pretty straightforward vented 2-way tower design. The name Nephila comes from family name of the Golden Orb-Weaver spider, famous for ‘the golden webs they weave’. Due to the Kevlar cone, and the golden kapton tweeter membrane, I felt they would weave the golden web of sound in front of the listener.

Design Goals
I wanted to create a slender 2-way tower with decent bass extension that did not require a subwoofer to fill out the bottom end. I also wanted a strong sense of realism from the drivers to make instrumentation sound as dynamic, realistic, and detailed as possible. This required a higher than average sensitivity, more than your average of 82-84dB in most home audio situations. It also required bass extension to at least 40Hz. And lastly- I wanted to use outboard xovers for easy tweaking.

Driver Selection
I won a pair of Airborne RT-5002 AMT ribbons at the InDIYana 2014 Spring loudspeaker event, which I happen to regularly host. Being the limited low-end extension of the AMT, I required a driver that would both reach to meet the AMT in frequency response, and allow a decent bass extension to keep this a 2-way project. From past experiences, I fell hard for the glorious mid-range of the kevlar/paper HiVi F6 (297-440). I knew it would be up to the task and keep the nominal sensitivity higher than average. This is my first time using the F6 myself. I wanted to give it a shot, and I was rewarded.

But something was boomy about the sound….
Turns out I had used a prior Vas parameter to do the sim, and that yielded a +4dB peak at 50 Hz. Back to the modeler again…

Stuffing the tower mildly yields a flatter response very close to what I had modeled prior. That was how I fixed the boominess to reflect the flatter response. Upon measurement of the result, the Fb was now 40 Hz, and yielded a very slightly overdamped response to blend very well with most room’s acoustic properties.

Enclosure Assembly
Prior note- A lot of what I did to the boxes was done prior to full assembly, and selected edge treatments had to be done before baffles were attached.

I picked up the knock-down Denovo tower cabinets (300-7066) from PE on sale at the 2014 Tent Sale for this project, and proceeded to take very liberal adjustment of its construction attributes. Being this is a 4-chamber cabinet with 3 braces (bottom being number 1), I placed the port in chamber 2, the driver in 4, and used the longer internal height end for the driver because there are 2 different ways to use the cabinet. 1 was completely stuffed with 3oz of polyfill, 2 had 2oz, 3 had 3oz + Sonic Barrier, and 4 was thickly lined with Ultratouch Denim insulation.

Due to the AMT having a narrower vertical dispersion than the average dome, I had to raise the baffle 6″ higher for better acoustic results at the listening position. I also tend to isolate a ribbon style tweeter from the woofer cavity in case they are not completely sealed, and this also solves that issue. I used a piece of 1/2″ MDF 6″ long the same width as the cabinet to alter the baffle position.

I also added vertical braces in an I-beam style construction to tie in both the bottom and top panels with the horizontal braces in the box. This lessened the resonance of the tower quite well, increasing the Fb of the panels involved to a negligible frequency. The port is actually sandwiched between the vertical brace and the front baffle, while the brace was heavily scalloped to not hinder airflow.

The port was an interesting development. I recently became reacquainted with a picture of a Bryston and Axiom speaker where the port exit had a varying set of radii. I had a wide enough chance to try something like it. I kissed the edge with a 3/8″ roundover bit, and then marked my ‘corners’ with lines parallel to the cabinet edges using a square to be the same dimensions of the circle. I then used a 3/4″ roundover by hand-routing inset 1/8″ depth and just touching the corner lines with the outer edge of the bit. This yielded somewhat of an 8-lobed port exit, reminiscent of the namesake- Bonus!

A table-edge router bit removed the edge-grain issue on the rear-panel edges so they were smooth to the curve. I used 1″ roundovers on the front to rear edges, and a full chamfer of the front baffle edges below the woofer position. The stock roundover on the baffle is 1/2″, and it stands slightly proud of the cabinet edges. I left it proud above the chamfer for added visual offset around the drivers, as well as using a V-groove immediately behind the remaining proud edge to intensify the aesthetic. I also used a straight bit and a modified edge-guide to cut a 90 degree v-groove into the chamfered edges.

The rear of the tweeter extension of the baffle was fitted with a U-shaped piece of 3/4″ MDF to make the upper baffle 1.5″ thick, and then was routed with a table-edge bit to smooth out the edges. The tweeter cutout is flush with the baffle surface, and the woofer is surface mounted atop the tweeter to minimize center to center distances without covering the exit chamfer of the tweeter.

I used right-angle brackets for rear external bracing of the tweeter extension, and square aluminum tubing for the outrigger feet.

Crossover Design
I found a measured FR plot of the RT-5002 in an issue of Voice Coil that was handed out at a past MWAF, and noted its profile. I had to tame a peak at about 10k and pad it significantly to meet the F6. The F6 has a peak at about 900-1000Hz that needs tamed strongly, or they can get honky in character, and also a bit of wobble before rolloff that while looks horrible, really only needs to be flattened out to sound right.
I went through 5 iterations before settling at an acoustic BW4 at 3.4kHz, with about a 3-5 degree increase of the forward lobe above horizontal. This allows decent results standing at a distance, or sitting closer to the tweeter without having bad vertical dispersion. The electrical transfer function yields a BS2 at 2.2kHz, which falls in line with the HD plots of the 5002 also provided in the periodical, while still keeping the 5002 protected. Initially I thought I was overzealous with the peak on the F6, but it turned out I had it correctly tamed in listening tests. I also had to use a notch on the F6 to tame some baffle-step bump. I used pretty high-end parts in the xover, consisting of some foil coils, a 16awg air 1.5mH element I wound myself on a homemade jig, a Solen Silversound cap, and a Zen cap on the tweeter.

The outboard xover cases are a set of Overnight Sensation boxes with the backs cut away. It just so happened a Neutrik NL4PMR fits the tweeter hole, and the Energy buyout terminal cups fit the B4N cutouts. A serendipitous discovery!

Slot rails were installed in the box and the xover was constructed with pegboard and zip ties. This allows easy removal for tweaking if need be.

Conclusion
The Nephila came to fruition as an astoundingly well integrated masterpiece that has the ability to portray wall to wall soundstage (if the source material permits), while not getting in the way of realism when it comes to instruments. The methods to keep the RT5002’s vertical dispersion in check and not become a hindrance worked quite well. I’ve been happy at the reproduction of pretty much all music from these. The midrange has the emotional connection I strive for, and the tweeter has the immediacy required for quick musical transients. The sensitivity was also 86dB, so that is definitely meeting my stated goal above. Bass walks well up the scale for good jazz, as well as having enough extension to please most people.

About the Designer
Wolf has been into the speaker-building hobby since circa 1997, and has amassed an immense number of projects since his entry. This is only one in his vast repertoire. He has a very understanding wife who puts up with him, and daughter of almost 3. Vowing never to fully grow up, he uses his spare time in the pursuit of all things audio, as well as posting often on PE TechTalk.