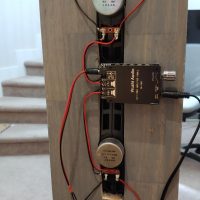 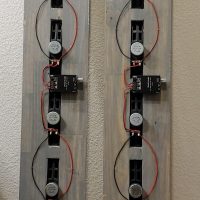 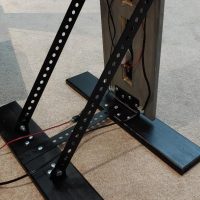 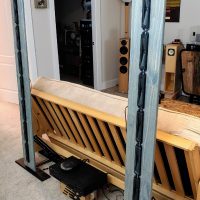 Design Goals:
Concept was to create a simple but nice sounding speaker using budget drivers that I spotted in P-E’s “factory buyout” section.

Crossover Design:
None; drivers operating in unison as full-range. As such, here’s the wiring scheme: Each speaker has two “groups” of four 16-ohm drivers, each group wired in parallel, resulting in a 4-ohm load per group. The stereo amplifier connection is one channel per group, and each speaker’s amplifier is driven in mono (via left and right channels respectively from the source). Clean & simple.

Conclusion:
Surprisingly full sound with an open & spacious sound stage, nice detail with an overall smooth presentation. Lower-end response is also respectable on their own given the driver specs, though the addition of a powered sub rounds thing out nicely.

About the Designer:
Retired engineer who’s been into fine audio equipment for many decades, like having fun with class-A amplifier builds and unconventional speaker designs.