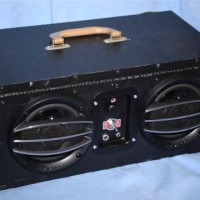 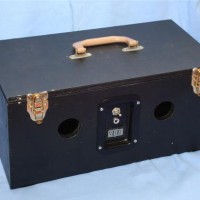 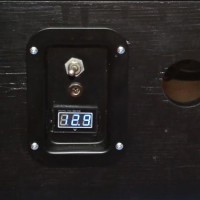 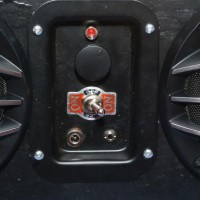 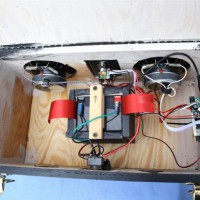 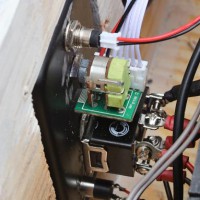 Overview
This past January (2013) I bought 2 -5 ½ inch speakers and a 5 volt battery & charger Then my friend, Steve, told me about the Dayton DTA amp and I bought it from Parts Express. Along with that order came the small catalog which featured the RocknDock portable unit designed & built by Matt Phillips. Using his ideas I decided to build my own portable unit. The box (17x9x8) I built out of scrap ½” plywood for the most part, cutting the various opening before I assembled it. I was going to finish it with a better looking outer finish and ended up painting it black. Since I wanted to be able to run it on external power & battery (and charge the battery) it required additional items. The front panel has a red LED , volume control, DPDT center off, switch for external power or battery, DC 12volt input jack and input jack for my Ipod. The back panel has a DPST switch for battery or for charging the battery, input power jack and a digital volt meter. The meter is good for checking the voltage while charging or playing. I put the battery in its own box in the center so the weight distribution is even. I had trouble mounting the volume/on-off switch as the printed circuit board hit the panel and cocked the whole unit. I took a square nut and drilled the center out to 9/32” (as a spacer) and now the control sits square with clearance for the printed board.. Steve & I spent an afternoon wiring everything and now its works very well and I am very pleased!! I can’t believe how much power that little Dayton amp has!!

About The Designer
Andy is 77 years old, a retired auto mechanic. Still do my own auto servicing, do a lot of photography (all digital now), favorite music is from the 1920’s-1930’s, go to traditional jazz festivals (mostly in the UK). Interested in railroads (mostly steam) and those of Colorado past & present. Member of quite a few clubs for antique cars & railroads. Selling parts for Valiant & Dart cars from 1961-1980. Drive my antique cars, which look nice, rather than just showing them. I spend a lot of time on my Mac computer,finding parts & information I need, also selling & buying on Ebay.