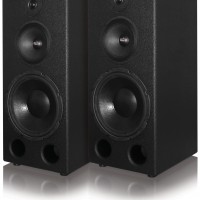 Design Goals
A coworker and I agreed to build two different designs using the same midrange. I decided on a large home audio “old school” type floor-standing speaker because I wanted great bass response, but also something that would get nice and loud with average amounts of power.

Driver Selection
The mid we decided to use is the PRV Audio 8MR400-NDY 8″, which offers great sensitivity and a smooth response. In order to match output levels that can be achieved by this midrange, I decided to complement that efficiency by choosing the Dayton Audio ST305-8 12″ woofer and the very sensitive Vifa DX25TG09-04 tweeter. I felt this combination would yield high output and a bass response that extended into the low thirties, all while not requiring a ton of power.

Enclosure Design
Using BassBox 6 Pro, I found that the woofer required a vented cab that was 2.6 cu. ft. after accounting for port, driver, and midrange enclosure displacement. This means a box with external dimensions of 31″ H x 14″ W and 16″ D would be ideal, and give me a total Vb of 3.1 cu. ft. Since the midrange was not sealed, it would require its own chamber that measures approximately 4″ deep, 9″ high and the box’s inside width. This displaced 0.28 cubic feet. Using two 3″ diameter ports that were 11-1/2″ long, the enclosure was tuned to 31 Hz.

Enclosure Assembly
I used simple butt-joint construction that was glued & brad nailed. I chose 3/4″ MDF for everything and added a few cross braces from side to side and front to back using scrap material. I countersank each driver, with the tweeter and mid ending up flush. The woofer was rabbeted only as deep as the metal part of the frame, since I used only one layer of 3/4″ material for the baffle. Each edge was shaped with a 3/8″ roundover bit to help “smooth out” the look. I lined the woofer and mid enclosures with R6 non-backed insulation and finished in two coats of roll-on Duratex. Each completed enclosure weighs approximately 70 lbs.

Crossover Design
I wanted this crossover to be as simple as possible and I knew the final home for these wouldn’t require ruler flat response. I had three goals going in to this design: first, use as few components as possible. Second, keep the impedance at or above 6 ohms minimum so any typical amp could drive these, and third, have a slight boost in the treble. I took in-box measurements, and after a few hours of design work I ended up with 2nd order filters on everything. The final crossover points were ~550 Hz and 3.5 kHz. A zobel was added to the woofer, and an L-pad on the mid. The lowest impedance is 4.1 ohms at 8 kHz; it doesn’t drop below 6.1 ohms from 900 Hz on down. These speakers should be an easy load for any 8 ohm amplifier. I recommend using 20 watt resistors, 18 AWG or larger inductors, and 250V caps for this design.

Conclusion
First things first, these are huge. They remind me of the Cerwin-Vega and DCM floor standers from years ago. The bass they produce is effortless, and since the woofers aren’t fully unloaded until about 23 Hz they dig deep too. After I installed the speakers in their permanent home we really let them rip. A basic 100 watt per channel stereo receiver drives them to unbelievable volume levels without even flinching.

They sound very good; detail and clarity are all there, so it seems that not much was sacrificed for the output. The midranges really shine as well—vocals have a bit of a live feel to them. Although we never had a problem, I believe the weakest link here would be the tweeters in terms of power and output. We played them for 4+ hours at well over 100 dB. They took it like champs but we were amp limited and had to bump the bass knob down to about nine o’clock to avoid clipping anything. If you have a good back and are looking for an old-school pair of party speakers that will still be delicate at low volume levels, give these a shot.

About The Designer
Matt Phillips has been an audio enthusiast for many years. His fascination with cutting-edge products and concepts has been strong ever since the beginning of his speaker building hobby. Matt’s other interests include woodworking and going to the shooting range.