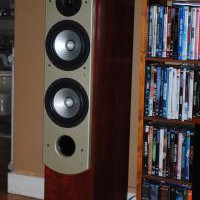 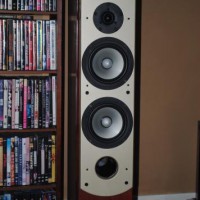 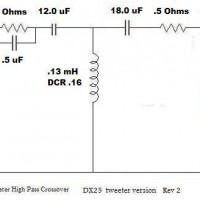 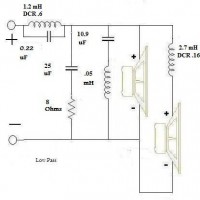 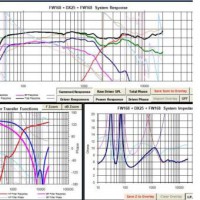 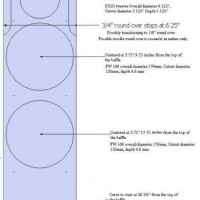 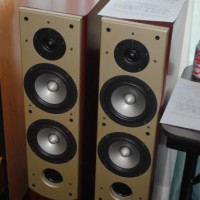 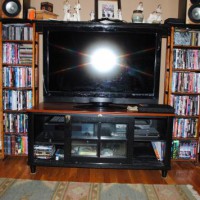 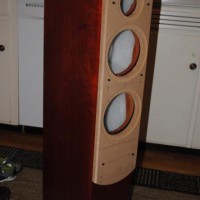 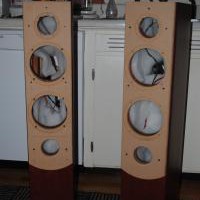 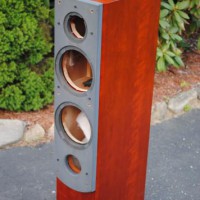 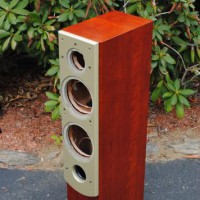 Driver Selection
The Fountek FW168’s selection was based on an online review of the driver that garnered my attention. I then modeled how a pair of the drivers would work in parallel in a 1.4 cubic foot enclosure in unibox and decided they would be a good choice for the project coming in under 50 dollars and getting solidly into the 40’s. The Vifa DX25tg09 was selected because I’d used and heard the tweeter in the Cranberry Lambics build and really liked how the tweeter performed in that speaker.

Enclosure Design
This was mainly a matter of measuring where the original drivers had been installed and then creating a new baffle that would be installed over the existing baffle. My idea was to get a baffle CNC’d that was exactly the same size as the speakers grill with recessed drivers completed and then add round overs, a cutout for the front port to the baffle, and cups to accept the original grills so my daughter wouldn’t poke at the drivers. The external dimensions are 39” tall by 7.5” in front and 8.5” in the back by 14” deep. The baffle width is 7.5” wide by 28” tall with the curve at the bottom starting at 26 ¾” from the top of the baffle. The primary woofer is in a .5 cubic foot enclosure tuned to ~50 hz. The woofer in the secondary enclosure is in a 1 cubic foot volume enclosure with a tuning of 47 Hz. Combined the F3 for the speakers is in the mid 40’s I’d estimate between 44 and 47 Hz. *Note one thing I’d recommend if building the design from scratch is to house the two FW168’s in a shared 42L enclosure tuned to 45 Hz for an F3 of ~41 Hz. The cherry cabinets were coated with 6 coats of spray on polyurethane and the baffles were painted with Krylon Brushed Metallic Champagne Nouveau spray paint.

Amplifier/Crossover Configuration
The primary woofer is crossed over third order at 1800 and the .5 Woofer is crossed 1st order at 500Hz. The Vifa DX25TG09-04 tweeter is crossed over 4th order Bessel at 2000 Hz. The crossover components are a combination of Jantzen Crosscaps and Dayton caps, with an Erse superQ inductor and Jantzen air core inductors. The crossovers were developed in Passive Crossover Designer and are based off measurements taken from Zaphaudio. The low pass portion of the crossover is from Ben “Wolf” Shaffer and was carried over from the initial revision of the Ruinations with minor modifications.

Conclusion
They’re a really nice speaker that would be at home being used for Home theater and or Stereo listening. Appearance wise the gold on cherry makes me think of a high end commercial offerings and has a high degree of WAF in the household which is a major plus. Sound wise my daughter and I have really enjoyed listening to them for music a few hours a week. The bass extends to the mid 40’s with a 2db BBC dip starting at 1000 Hz and going to 4500 Hz. The low point impedance wise is slightly below 5 ohms at 175 Hz with the impedance phase within +-30 degrees. The total driver cost is currently $232.00 beating my original budget target of $300.00 for drivers ($184.00 for the woofers and the $54.00 for the tweeters). The cost for the crossovers I estimate to be around $160.00 in parts. Feedback on the sound from MWAF was: Balanced well integrated overall sound, A touch of stage compression. Nice tonal balance, Good Bass Extension Great Balance, Great Bass, Great job Many thanks go out to Wolf and Mike Zisserson for their help during this project. For those that want additional information on the Ruinations the build thread is at http://techtalk.parts-express.com/showthread.php?t=224606&highlight=ruination&page=2

About The Designer
I’m in my late thirties testing medical devices and the software on them for a career. I’m relatively new to the DIY speaker hobby and have only been building speakers for a couple of years now. My wife and I have been married for four years and she’s been very supportive of the hobby. My daughter will be turning two shortly and manages to keep my wife and I fairly busy.