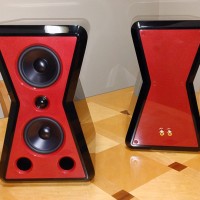 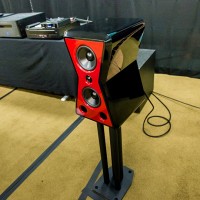 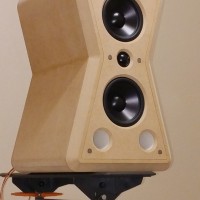 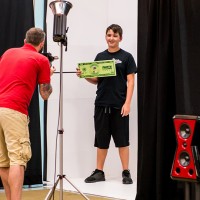 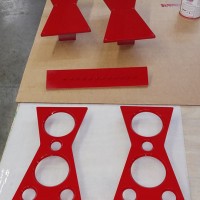 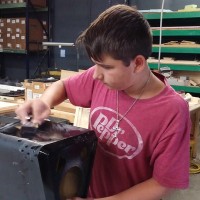 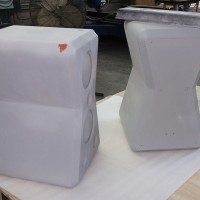 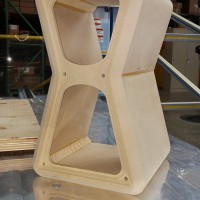 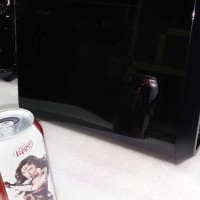 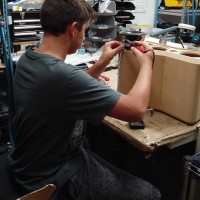 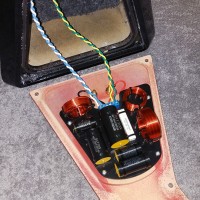 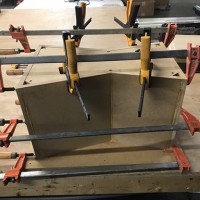 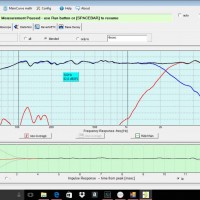 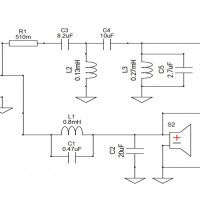 Project Description:
A Father-Son Project for 2017’s MWAF. Kole has always enjoyed helping me build speakers. This was the first set he could call his own. Due to time constraints, we shared the workload but he got a taste of everything involved and learned a lot. Hopefully he can pass some of that on to a son of his own some day.

Design Goals:
A unique MTM Bookshelf speaker capable of making a 14 year old smile from ear to ear as he showed them off to his friends. Mission Accomplished!

Driver Selection:
We decided to try the new aluminum versions of the Designer Series drivers and have no regrets, lots of bang for the buck! Driver choice ended up being the 5″ versions, two DSA135-8’s in parallel with a ND25FN-4 tweeter. Just a little over $120 dollars for the full set of MTM drivers, sweet deal! This also made it easier to justify spending a little more on the crossovers.

Enclosure Design:
Kole’s only request was it needed to look “Cool”. We decided to build an enclosure that a theme could be tied to, hence the name of the speakers, The Black Widows. The enclosure has an internal volume of 20 liters and is vented with two 1.5″ ports. Tuning is 45hz which yielded an F3 of 48hz.

Enclosure Assembly:
Due to the complex shape of the enclosures, fixtures were made to help in the assembly. After the enclosures were assembled came the long arduous process of creating the piano black finish. Primed first followed by lots of block sanding. Painted next and then clear coated which again was followed by more block sanding. And finally, buffed out with several different compounds and pads. Once we got to that final stage and saw the end results, it all felt like it was worth every minute.

Crossover Design:
Ended up 2nd order on the woofers and 4th order on the tweet. Acoustically summed around 2300. A few more parts then we had hoped for but there was plenty of room left in the budget due to the great pricing on the drivers. This was only the second crossover I’ve done on my own so there is probably room for improvement. As is, it doesn’t appear to have any blaring issues screaming to be fixed.

Tips & Tricks:
The unique cabinet shape didn’t come without issues. We had a large null in the Frequency Response right around 1K, a midrange leak through the ports. After extensive trial and error followed by lots of measurements, we found a combination that alleviated most of the dip. We installed a piece of UltraTouch Denim insulation towards the middle of the enclosure and added elbows to the ports with the elbows aimed towards the floor. This addressed most of the midrange leak and the Frequency Response improved considerably.

Conclusion:
This was a fun project, one the both of us will remember for a very long time. They won third place in the Dayton Audio class at 2017’s MWAF and they also won “Fan Favorite”. Kole was very happy with how they were received by the rest of the guys. They are now hooked up to his PS4 for his gaming and I also catch him frequently just listening to his favorite songs (at an above average listening level), so I know he’s enjoying them. He loves the fact that I have to tell him to turn them down on occasion.

About the Designer:
I was a CAD Designer in what seems like a previous lifetime now. Currently, I’m a Production Manager for a growing company that just happens to have some 5-axis CNC’s. The boss allows me to tinker on the weekends and use the CNC to cut parts for enclosures, by far the best company benefit he could ever offer. My son and I both love to work with our hands and building speakers is a blast! There’s always room to challenge yourself in this Hobby which will keep it interesting for years and years to come.