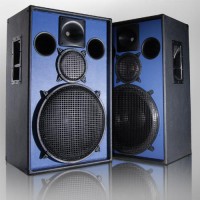 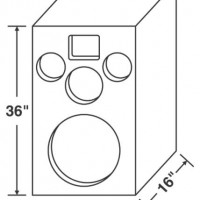 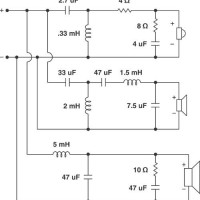 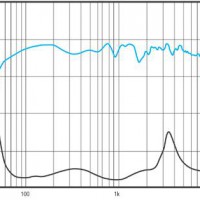 Driver Selection
Due to the design goals listed in the previous section, I knew that I needed to be looking at pro-sound drivers for this project. I also knew that if one of my main goals was chest thumping bass, I needed to try to use as large of a woofer as feasible. In discussing with our resident pro-sound expert, a combination of 18″ woofer, 8″ mid, and 1″ tweeter seemed to be an appropriate choice. I’m going to change things up a bit and focus a little more on the drivers that I chose for this project. I know many people only use elements of these designs, or use one driver and change another, so I figured that some more specific info about the drivers would be helpful. Hammer 18CLF: This surplus driver is a limited-supply item, but is nearly identical to the new Eminence Definimax 4018LF 18″ driver, so my description should hold true for both. They are very powerful-looking 18″ woofers, and feature a massive cast aluminum frame, high-quality coated paper cone, nicely vented motor structure, and copper shorting rings for reduced distortion. Frequency-wise, this woofer has a smooth response, without significant breakup peaks or other anomalies. It has a strong response up through 200 or 300 Hz, where it begins to diminish in output. Thanks to the shorting ring in the motor structure, the bass and midbass is very clean and tight. Based on my experiments and use of this driver, I would say that it would be at its best when used in smaller vented cabinets with slightly higher tuning frequencies than what I used in this design. With my alignment, the low-end extension was impressive for a PA speaker, but was missing a bit of the “snap” and “punch” normally associated with output around 50 or 60 Hz. With a smaller box, higher tuning alignment, four or eight of these running from 40 -120 Hz would produce some killer bass output. If you’re looking to add some “bass bins” to your PA rig or club, these would be an excellent choice. Hammer 8SLF: Once again, this surplus driver is of a limited supply, but is interchangeable with the Eminence Beta-8A for all intents and purposes. In my opinion, the Beta-8 is one of the best all-around high-sensitivity 8″ midbass/midrange drivers available, and is a steal at its price point. While it doesn’t appear to be anything special in terms of construction, it has the perfect combination of cone, surround, spider, and dustcap to provide very smooth and clear midrange without any harshness or breakup peaks. It is an open-backed driver, which means that it does require a rear chamber if it is sharing an enclosure with a woofer. This gives it the flexibility to be put in small sealed enclosure if it is being used as a dedicated mid, but it can also be used in larger vented enclosures as more of a midbass driver. When using it in a small sealed enclosure, it is critical to properly damp the rear chamber to prevent rear-wave reflections from distorting the sound. In this design, I was able to clearly see these reflections in my preliminary measurements, and had to make sure I fully damped the rear chamber with a combination of foam, fiberglass, and Acoustastuf. All-in-all, this is a very versatile 8″ driver, and would be a great choice for any high-sensitivity application. I’ve even used it from 80 Hz to 2.5 kHz in a home theater surround-sound system, where the high sensitivity provided an excellent theater-like experience even with a modestly-powered receiver. Eminence ASD1001S w/ Dayton H07E Waveguide: The Eminence ASD1001S is a relative newcomer in pro sound high frequency drivers, and features an unobtrusive appearance as well as price. For a mere $30 you get a driver with a titanium diaphragm, nice quality spring terminals, and high sensitivity. On paper, the frequency response of this driver is not the greatest, showing a rolloff between 5 kHz and 10 kHz, with some extra zing up around 18 kHz. My measurements coincided well with the Eminence supplied measurements, which is nice to see. Eminence doesn’t publish this data, but it is in the distortion domain where this driver really shines. Distortion is extremely low down to around 2 kHz, and remains low throughout the entire range. The high-frequency rolloff is actually a result of the driver staying linear (where most similar drivers are full of breakup peaks and ringing); this combined with the overall low distortion makes for a very non-sibilant, easy-to-listen-to driver. Since the ASD1001S is a driver only, it does need to be mated with a lens of some sort for implementation into a design. I tested many waveguides and horns as part of the design process before settling on the Dayton H07E. This waveguide provided minimal disturbance of the natural response of the driver, while providing good loading down to 2 kHz. Smaller horns could not provide this low-end loading, while the larger horns tended to disrupt the high-frequency response. This waveguide seems to be an excellent choice for applications where high-fidelity is paramount over high-sensitivity. • Project Edit: The discontinued Hammer series drivers have been replaced with standard stocking Eminence drivers that are nearly identical to the drivers used in the original design.

Enclosure Design
As I mentioned briefly in the last section, for my particular application I was trying to achieve good low-frequency extension, and extreme power handling was not my goal. As such, I went with a larger ~5.5 cu. ft. enclosure tuned to approximately 30 Hz. This is a good alignment for full-range, limited power applications. For high power applications, a smaller 3 cu. ft. box tuned to roughly 40 Hz would produce exceptional results. The midrange is in its own subenclosure of roughly .1 cu. ft. and is fully stuffed.

Amplifier/Crossover Configuration
The crossover design is a basic three-way design crossed at around 400 Hz and 2.2 kHz; the details can be seen in the schematic. I initially started with higher crossover points on both ends of the midrange, but I was not satisfied with the dispersion characteristics, so went back to the drawing board and pushed things a bit lower. While this probably reduces the power handling somewhat, it produces a much more open sound that is more “hi-fi” in nature. Even with these crossover points, the speakers should easily be able to handle several hundred watts RMS and play quite loudly even by pro-sound standards.

Enclosure Assembly
This enclosure was constructed in what I would call typical “pro sound” fashion. Meaning it was built from 3/4″ birch plywood, with an inset front baffle. The overall dimensions are 22″ wide, 16″ deep, by 36″ tall; the baffle is inset approximately 1-1/4″. All joints are reinforced with 1-1/2″ strips of plywood, which also supports the front baffle on all sides. The midrange enclosure is built from 3/4″ material as well and is 6″ deep. The most interesting part of the construction of this was the vinyl work. The sides, top, bottom, and rear of the cabinets are covered with black leather grain vinyl, while the front features blue vinyl that I picked up at my local fabric store. 3M Hi-Strength 90 was used to secure the vinyl, which provides very aggressive adhesion and tacks up quickly. I added one little twist to the vinyl installation on the front baffle, and that was to use groove-and-spline technique similar to what is used on screen doors. This allowed me to get the vinyl nice and tight along the edges with a clean transition between the blue and black. Black metal cabinet corners provide improved durability and simplify the vinyl installation.

Conclusion
The end result of this project is a speaker that offers the ruggedness, reliability, and output of a pro-sound box, but with a sound that is as “hi-fi” as reasonably possible. Meaning, it has good low-end extension, a smooth midrange, and a somewhat laid-back top end. The low-distortion drivers give it a sound that is much clearer and more revealing of the source than most typical PA speakers–almost putting these in the studio monitor category. While some pro-sound enthusiasts will consider this “hi-fi” sound a negative, I figure there are plenty of other more pro-sounding pro sound speakers out there. Simply put, if high fidelity and high SPL output are your goals, this would be a great speaker choice.