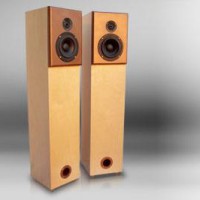 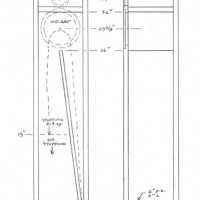 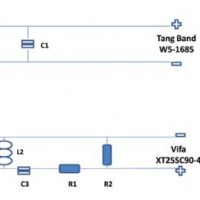 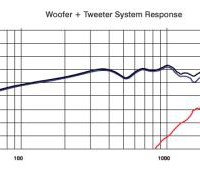 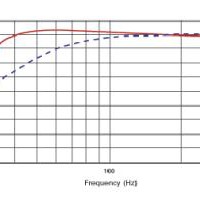 Driver Selection
I am a big believer in the philosophy that the more parts in the crossover, the less life from the drivers, and if the crossover requires an inordinate part-count then the drivers probably don’t belong together; that’s especially true in a budget design! Respecting that philosophy first and foremost requires starting with well behaved drivers. I also wanted to try a new mid-woofer, something with a limited history in the design community. Fortunately for this design, my first choice was the best option, the Tang Band W5-1685, which was then paired with the Vifa XT25SC90-4. The Vifa tweeters small flange allows for tight center-to-center placement, ideal for this design. Testing revealed that both the Tang Band and Vifa helped achieve the exact results desired! 1-1/8″ tweeter to improve power-handling and maintain a coherent source rather than use a smaller 3/4″ dome tweeter that has to be crossed higher and therefore “stretching” the radiation point at high frequencies.

Enclosure Design
Utilizing a mass loaded, tapered quarter-wave enclosure designed by Paul Kittinger, the 5 1/4″ Tang Band W5-1685 is able to achieve an F3 of 33 Hz and an F10 of approximately 28 Hz. amazing performance courtesy of Paul and Martin King’s work! Using 3/4″ stock the external cabinet dimensions are 40″ x 8.5″ x 8.5″ with the internal volume of 1.02 cubic feet on measurements of 36″ x 7″ x 7″. The total line length is 62″ with the woofer centered on the line. A piece of one-half inch MDF divides the cabinet from front to back starting in the lower right corner of the chamber, terminating at the center point of the enclosure. The divider runs to the 26″ mark from the base. The cabinet is designed to support a port on either the front or back baffle, depending on room placement. The port is 2″ I.D. by 5″ length. The cabinet is evenly stuffed with eight ounces of Acousta-Stuff ending 13″ above the bottom of the port-side of the chamber. It is important that the stuffing is evenly distributed throughout the chamber by density. To accomplish this, it’s advisable to stuff the cabinet before securing the front baffle. The upper chamber easily houses the Vifa XT25SC90-4 tweeter and the crossover unit. One last thought: if you plan on building the cabinet as shown, be sure to install the internal wiring and binding posts before securing the front baffle. In testing I simply secured the front baffle with strapping and adjusted the Acousta-Stuff until satisfied. While outstanding low end response is achieved in this design, the compromise comes in a loss of overall efficiency, averaging approximately 79 dB @ 2.83 volts, or 2-watts on a 4-ohm system. A few enclosure building tips: • Secure the stuffing with spray adhesive, especially behind the driver and along the wider side of the transmission line. • With the stuffing ending at the 13″ mark, three 3/8″ dowels running across the enclosure will help secure the stuffing without impacting the function of the line. • The Tang Band driver is a hefty unit! I recommend a baffle thickness of at least 1-1/4″. • All drivers are flushed mounted, making a 1″+ baffle especially important!

Amplifier/Crossover Configuration
The Copper Project utilizes an extremely simple crossover design, with a second-order topology on the woofer and a third-order on the tweeter. Incorporating an L-Pad into the tweeter design reduces the output by approximately 6 dB, aligning it with that of the Tang Band woofer. The crossover point is set at 2,500 Hz. The impedance stays at 4-ohms or better. Since their debut, I’ve built a second set making some minor adjustments to the crossover, the result being a more open midrange presence and smoother bass response. The result of all these measures is a frequency curve with an efficiency of 85 dB/1W/1m that is within +/-0,5 dB’s over the entire range and a near ruler-flat impedance curve that is centred around a healthy 6 ohms. This should be an easy load for any amplifier. The crossover components were chosen for their good price/quality ratio. Nothing exotic, with standard quality MPT’s throughout. Inductors are standard air-cores where low Rdc is not an issue, laminated-core inductors are used where low Rdc is important. All the resistors are induction free types, the couple of extra bucks are worth it here.

Conclusion
How often does a project come together as wonderfully as this? With about $230 in drivers and crossover parts you get great bass- big, yet tight; great midrange, and sweet highs. Oh sure, with a smallish driver some compromises are made such as the need for a healthy amplifier, but as far as sound quality and ease of build, The Copper Project met and exceeded all my expectations. Thanks to Paul for the enclosure design and ‘Dirk’ for his assistance with measurements and crossover design- great work, guys!

About The Designer
Raised in an environment where there was always an old-time stereo just waiting to be disassembled, Marty Hafenbreadl developed his fascination of radio and music, and from that a natural progression into speaker design. With no formal electronics education, he still enjoys the art, science, and creativity that go into the build process. Living in Wisconsin’s Fox Valley, Marty’s fortunate to live around some of the hobbies most talented designers and is able to call them friends. Like most DIY’ers he’s constantly looking for ways to improve his original designs as well as formulating ideas to integrate into new projects. Some of his other interests include snow skiing, golf, raising roses, coaching his son’s Little League team, participating in DIY events, and chatting on the PE Tech Talk board.