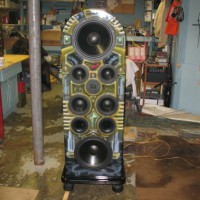 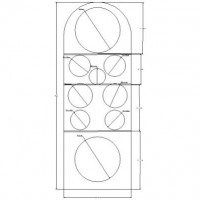 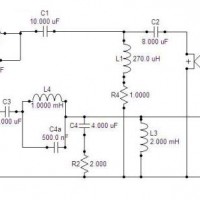 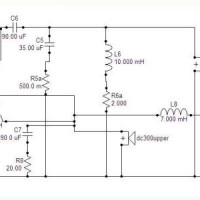 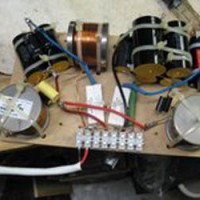 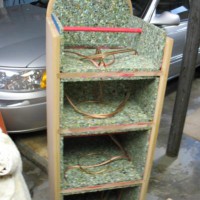 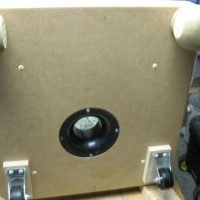 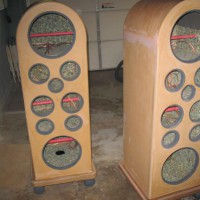 Driver Selection
Because part of my goal was to use only Dayton Audio DC Series drivers, my driver selection process was made somewhat easier. Tweeter – What else but the well liked “Silkie”, the DC28 Mids – Once again, what else but the venerable DC130s. The hard part was, do a 3-way or 4-way? Here I chose to do a 4-way because I really wanted to be able to use the DC160s in a mid-bass role. The mid-bass was selected, now what to use for the bass? I selected the DC300 for its ability to produce nice tight clean bass down to 30 Hz, which I liked for music. Once drivers were selected, I opted to use 2 DC130s (in series), 2 DC160s (in series) and 2 DC300s (in parallel); this setup I felt would produce the best full range sound.

Enclosure Design
Coming up with a 4-way, seven driver enclosure was a very hard task. However, after about fifteen tries I came up with a very unconventional design. A cluster of five drivers in the center of the cabinet would approximate a single point source. This allowed for multiple drivers and not make the cabinet too tall, although it did make a very wide baffle. I chose to use an 18″ wide baffle to help with off-axis response, and a height of 52″ to accommodate driver spacing. I also chose a 19″ deep cabinet to allow for volume requirements of the DC300 drivers. The rounded top was added for visual interest. The base (22″ x 21″) and feet (4″) were added to allow for a down fire port. Two 2″ ports were added to the DC160 chamber for bass reinforcement. I opted to make the top DC300 sealed to get maximum tight bass. So…I had a overall layout, now all I had to do was build it!

Amplifier/Crossover Configuration
The crossover design was somewhat difficult, given that I wanted a 4.5-way circuit. I really wanted to extract the best from each DC Series driver. After some initial testing, I developed a crossover based on two octaves for the mid and mid-bass drivers. This made the crossover points 3,520 Hz, 880Hz, and 220 Hz, with the 0.5 cu. ft. ported DC300 at 180 Hz. Next step was to make sure the XO could handle a lot of power, so I doubled all resistors and capacitors. Because of some tweaking I did during voicing, C0, C4, and C4a were singles. I modeled this circuit until I had a near-flat response, and then spent about two weeks tweaking the crossover until it sounded correct (to me!). Overall there are a lot of parts in this design, but not that many for a 4-way. This XO came out to be a 6 ohm nominal, with a low point at 70 Hz of 3.7 ohms. I used two XO boards, one for the DC28 and DC130s placed in the upper DC300 chamber, and a second for the DC160s and DC300s placed in the lower DC300 chamber. This setup also allowed for easy bi-amping. Overall, this speaker system can handle up to about 400 watts. During testing, I found that using more than about 200 watts just plain hurt, unless I was over 30 feet away. NOTE: I used Jantzen P-Core inductors at L5, L7, and L8 (which had to be unwound to the required value). I used I-Core inductors at L3 and L6 to reduce cost. Inductor L1 is a Jantzen 10 ga. Air-Core. All values on the crossover circuit are measured values not listed values. Caps setup: C1-5.1+5.1 C2-4+4 C3-6.8+3.3 C6-25+25+40 C5-10+25 C5a-.22+.33 C7a-.22+.33 C7-25+25+100+47

Enclosure Assembly
The enclosure for this speaker was constructed of 1″ MDF (two 1/2″ sheets glued together) for the sides, back, and baffle. 3/4″ MDF was used for the inside chamber dividers. The base was made of double 3/4″ and 1-1/2″ MDF sheets. Overall height is 58″ tall by 18″ wide by 19″ deep. The top was made from 1/4″ bendy MDF and thirteen 2″ strips of 1/2″ MDF. All drivers and ports are recessed. There are three 3/4″ rods centered in the DC300 and DC160 chambers. The DC130 chamber is shortened by 6″ with a 3/4″ MDF block in the back of the chamber. Ports – the two ports in the DC160 chamber are 2″ Precision Ports at full length (uncut). The downfiring port in the lower DC300 chamber is a 3″ Precision Port cut to 12″ length-it is also off-centered by 2″ to miss the cross rod in the DC300 chamber. All inside surfaces are coated with “RedGard” from Home Depot. 3/4″ carpet pad is used on all inside surfaces, except the baffle back. 3/4″ Sonic Barrier was used on the underside of the rounded top, because it fit and glued in best. Overall, this was not a hard cabinet to build; the only hard part was cutting all the driver/port holes on the baffle. I used rabbets and dadoes for all connection points. Rabbets were used for the two curved top pieces to rest in. After much sanding, bondo-ing, and sealing, James primed, painted, and finished the speakers.

Conclusion
This project turned into more than I ever dreamed it might! After James’ finishing work, these speakers turned into a true “showpiece” for Dayton Audio. Not only are these a “work of art,” they also truly showcase what can be done using Dayton Classic Drivers. These speakers are very detailed, have a large sound stage, and produce very clear sound when playing any kind of music. Plus, they sound good at low power or at high power! They love to be played very loud and can fill a large space with sound. If you want a set of speakers to play music at any level in a large room, these are for you.

About The Designer
Ed Froste is retired from 30+ years in the IS/IT field, who lives with his wife of 40 years in Frankfort, Kentucky. Ed has been a life long audio enthusiast and loves to build things. Now that he is retired, he is free to enjoy the speaker building hobby.