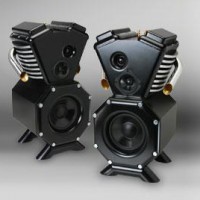 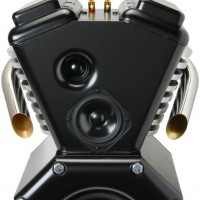 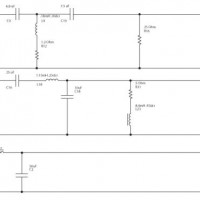 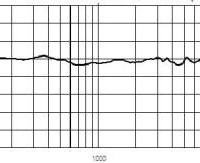 Driver Selection
I was originally only going to use drivers I had on hand but as I got into the design I ended up replacing the woofer and using the Dayton Audio DC160-8 6-1/2″ instead, based on a recommendation from Paul C. from PE’s Tech Talk forum. The Vifa/Peerless TC08SD69-08 3-1/2″ driver that was on my shelf seemed to fit the midrange bill nicely. The tweeter, a Vifa AC25TG05-04, I had in my stash as well.

Enclosure Design
I ended up with a 9 liter vented box tuned to 52 Hz for the woofer, using the rear half of the mid/ tweeter box so the ports would vent out of the “heads”. I used two 1-1/4″ x 6-3/4″ ports. The front half of the upper box was 2 liters sealed for the mid. The tweeter was mounted on the inside of the upper box to create a waveguide effect. I time-aligned the drivers acoustically just because it worked well with the design. I lined the sides, front, and rear panels with a constrained damping layer and used rigid fiberglass for additional damping. The “valve covers” are removable to access the crossovers, and the front and rear baffles are also removable to access the drivers. The baffles are decoupled from the boxes with a constrained damping layer. This is where each builder gets to add their personal flair. Some of these have been built using Dayton Audio curved sided cabinets. Some using a standard butt jointed MDF box, some with dowel construction. The only constraints are the volume and the baffle. Please note that the baffles should be mirror-imaged.

Amplifier/Crossover Configuration
I crossed the woofer to mid at 600 Hz and the mid to tweeter at 2,700 Hz. I kept the impedance above 6 ohms since I wasn’t sure what was going to be used for amplification.

Conclusion
I have to say this was a really fun build and I completed it in about three weeks, so it didn’t drag out at all. I wish I had had a little more time on the crossover design but I had to have them ready for Christmas. Even so I think they sound great. I was very impressed by how clean they sound at high volumes, which I believe is due to the fact I was planning on using a sub for the bottom end, so they don’t have to play too deep. They also seem to image very well and have a pretty decent soundstage. I hope to be able to get them from my brother-in-law to take to the next DIY event to solicit others’ feedback. This project was so much fun, the “Knuckleheads” are going to lead to building the “Panheads” next, which are going to be done with all Dayton Audio drivers and a little cabinet design change. Should be fun!

About The Designer
Dave Pellegrene is a remodeling contractor and has been in the business for over 30 years. In his free summer time months Dave competes in water ski jumping tournaments. His favorite part of speaker building is cabinet design and he also enjoys learning the electronics side of things. Dave has only been building speakers for a short time and one of the things he likes best is the fact that it is a never-ending learning experience.