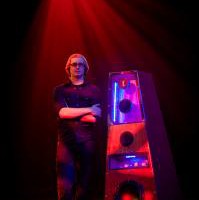 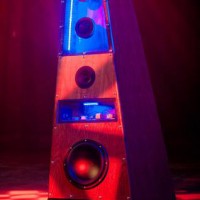 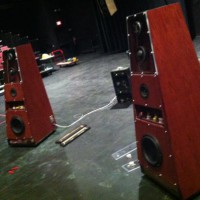 Driver Selection
Tweeter: I chose TB’s RT-1516SA Ribbon tweeter because of the smoothness of the sound it produces at high SPLs and I have always enjoyed the overall sound of ribbon tweeters. Drivers: I chose TB’s 75-1558SE 3″ Dome driver because of its high sensitivity and that it is enclosed. This was important because it is enclosed in a box with an acrylic baffle and I didn’t want to dampen a see-through box. Next is Scanspeaks 15M/4624G Discovery, 5.25″ Midrange. I chose this because of its flat frequency response from 200 Hz to 1100 Hz which is the range that I wanted to cover with this driver. Subs: And lastly is TC Sounds Epice 12″ Subwoofer. I chose this for its low frequency response with an f3 at 15 hz and its power handling of 2000W/3000W max. This ended up being a good choice of driver to use with a transmission line.

Enclosure Design
For my enclosure I wanted to create something that I haven’t seen before but still reacts appropriately with my drivers. I decided to give them a 12 deg backwards lean to line up the magnets of the drivers to time align them. They also have a 12 deg lean into the center to decrease any major single frequency edge diffraction. The Subwoofer is running through a 14′ transmission line tuned to 20 hz to extend the low end. The overall size is a 2’x2′ base, they’re 5’8″ tall and 350 lb each. The baffle of the upper two drivers is made from 1/2″ acrylic. The crossover is also in its own internal box with an acrylic baffle. This made it so that you can view the inside of the box and the crossover.

Amplifier/Crossover Configuration
Right now they are powered by 3 separate amps. Each sub has a Dayton Audio 500W plate amp (in a separate enclosure), and the other drivers are powered by a 70 W Crown amp. The passive crossover design has a 2nd Butterworth at 4K on the tweeter. A 2nd order Butterworth at 3K and a 3rd order Legendre at 500 on the upper mid. A 2nd order Butterworth at 500 and a 1st order Bessel at 60 on the lower mid. The Subs have an active crossover built into the plate amps that are set at 60 hz.

Enclosure Assembly
The first thing I built was the internal box. This is what is housing the transmission line. This is made from 3/4″ MDF. Next was the outer box that is made 3/4″ red oak.

Conclusion
Overall I was very happy with how this project turned out. They have very deep and clear low end and very crisp highs. They are now my home theater speakers and I am very happy with them being my first speakers that I ever built.

About The Designer
My name is Matt Willett. I am currently a senior student at Michigan Technological University. I am enrolled in the Audio Production major specializing in Acoustics. It has been a long time dream to design and build my own speakers, and now with the knowledge Im gaining I hope to create my own company.