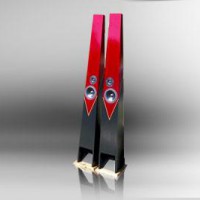 Driver Selection
The pipes are roughly 71″ high, 5.5″ wide at the top and 9.5″ at the bottom. With careful layout, the entire set can be cut from one sheet of 3/4″ MDF and assembled in one day depending on finish. Andy’s crossover is a simple first order series with L-pad, only 4 parts. The woofer is the venerable Vifa P17WJ and the design calls for the Vifa D25AG or D27TG-35 tweeters. I had a pair of D27’s, but also a pair of PL27TG-35’s on hand. We decided to build with the PL27’s in mind and try to match up with the similar D27’s for a tweaking lesson and a good listen to Andy’s original crossover.

Amplifier/Crossover Configuration
The pipe design served well in all aspects of our requirements, although our particular finish took far longer than we had planned. Between Christine starting a new job and the unusual weather, the finish took over a month and we still have the final clear coats to do. This extra time was used to evaluating different tweeters and crossover topologies. First the two builders assembled Andy’s crossover supplied with the plans. The padding resistor was adjusted for the D27TG-35 tweeters and a test session followed. It was obvious from the first listen Andy had spent a great deal of time and effort on designing the pipes. The sound was open and detailed, however the top end needed to open up slightly for the D27’s. A trial with that crossover and our target PL27’s brought disappointing results. Several adjustments later the D27’s really came to life, but we were no closer with the PL27’s. After consulting with PE Paul who gave us some great insight, we focused on bringing the PL27’s into line. 13 different combinations were tried between 2300-3100hz and our final design ended up at 2450hz. Here’s our final crossover for the PL27TG-35 tweeters.

Conclusion
The parts for the pipes were less than $150 plus wood and finish. These speakers are very easy to construct although our finish was far more complex than usual. Typically these can be constructed in one afternoon and finished in veneer or other finishes to taste. They are quite elegant, and have been the all out favorite of the many visitors since the project began. The sound is exceptionally clean and open and prefers a good volume level. Bass is tight and defined and improves with volume, although at light listening levels seems to be lacking. The mids and highs are close to neutral, a shade warm but not forward. This seems to be a quality of many of the Vifa tweeters and the pipes match up extremely well with the P17WJ. Overall, a very good design, and a good project for beginner and experienced alike. Christine and Michael enjoyed the project and have dubbed them the “Snipers.” One final note concerns the base. A heavy base is recommended, and improves the bass performance dramatically. We chose to spike the bases because of our light base material. For a complete set of plans go to http://users.tpg.com.au/users/gradds/ARGOS/taperedpipes.htm. For use with the PL27’s I would suggest trying the crossover above and tweak to your own tastes. Many thanks to Andy Graddon for the great design, and input and ideas throughout the construction process. Thanks also to PE Paul, Lefty, Craig, Wil Kelch, Rob, Chris8 and many others for guidance and general good-natured heckling and prodding.

About The Designer
David, Christine and Michael Burke live in Idaho and enjoy a variety of interests and hobbies, from the highly technical to baking their own cultured sourdough bread. This was Michael and Christine’s first speaker project.