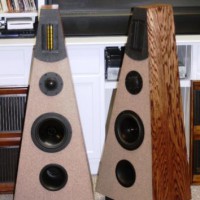 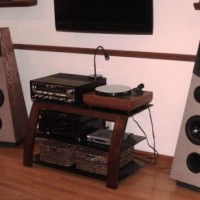 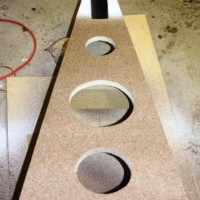 Driver Selection
Originally I was going to use the Dayton Reference series 10” woofer (Dayton Audio RS270-8) but the optimum enclosure size would be larger than desired so I went with the 8” of the Reference series (RS225-8). Also planned were the Dayton RS52AN-8 2” dome midrange & Dayton RS28F-4 dome tweeter. With some experimenting I found the Dayton PT2C-8 planar tweeter to be a better match so it was used instead. These were also drivers I had on hand and borrowed from other projects, futher keeping the cost down. Plus the aluminum plug on the woofer and screen on the midrange protects the drivers from the two year old.

Enclosure Design
As mentioned earlier the design was inspired by the Metronomes I had planned to restore but passed on for other projects and less grief from my wife. I decided to use the truncated pyramid as it will reduce or eliminate standing waves & resonance and had the look I was after. One of the objectives I learned of the Metronomes was an attempt at time alignment. Not having the knowledge or patience to try to incorporate true time alignment I did angle the front of the cabinet in a quasi attempt.

Amplifier/Crossover Configuration
The crossover is a stock 3 way crossover from PE with XO points at 800/5000Hz. They are adequate for now but as I learn more I do plan on building crossovers better suited for the drivers. I also added an L-pad for the midrange on recommendation from people who have used that driver. Thanks to some tuning help from the staff at parts Express the speakers are tuned down to about 30 hz. My system upstairs is some newer two channel Yamaha gear. When I first listened to them, I was a little disappointed as there wasn’t much bass. That being a complaint I have of that receiver I switched it out with a Pioneer sx-5580 (black face sx-1050) and was pleased. Sound stage was 3 dimensional and bass was solid and even without out being boomy. For fun I took the speakers downstairs and hooked them up to my tube gear (AMC tube preamp & pair of 20 watt Baldwin 6L6 based monoblocks) and that’s when they really came to life. They have a more three dimensional soundstage, highs are clear and crisp; piano, symbol crashes, trumpets, etc. sound lifelike. You almost think Miles Davis is there in the room.)

Enclosure Assembly
¾” particle board covered with a thick oak veneer was used to build the cabinets. The veneer was sanded and finished with several coats of a dark tinted Danish oil. The front was painted with a textured marbled paint (tan, white, brown) to match the table tops in the room (request of the wife.) The pedistle is painted the same textured black as the accent plate at the top of the cabinet where the planar tweeter is. The cabinets are lined with 2” foam egg crate onthe sides, read and bottom of the cabinet. No grills are used. I had thought about grills but decided they look better without.

Conclusion
Though I do need to upgrade the crossovers, I am happy with them and feel I achielved my goals. The speakers are very musical and handle most music types well especially jazz, female vocals, instrumental, most classic rock, etc. These aren’t party speakers or ones designed to play rap, dance music, etc. on (I have others for that…) but they do give good clean sound for every day or critical listening. They are acceptible to my wife and I don’t have to worry about my 2 year old trying to climb on top of them or poking in dust caps (see the driver designs) though I do have to pull out balls, socks and the occasional half eaten sandwich out of the port from time to time (found a sock and a dog treat too but that’s another story.) Plus they have a contemporary feel to them and don’t look like a typical speaker.

About The Designer
I’m a novice audiophile and speaker builder and am picking up the hobby from when I was a kid and would go to a hi-fi store, see something I wanted but couldn’t afford and then go to Radio Shack and see if they had parts I could build something similar from, which usually didn’t work out too well.