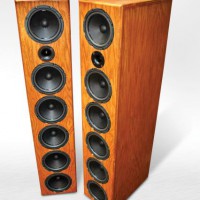 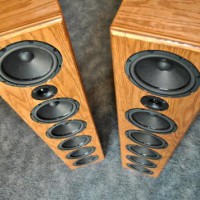 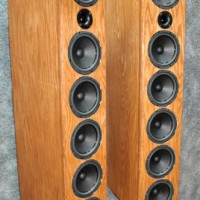 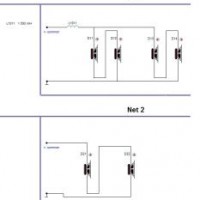 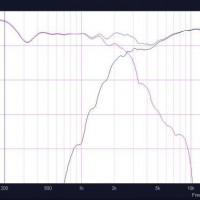 Driver Selection
The woofer: I liked the low price of the Aura NS6-255-8A, and obtained several for evaluation. While their motor systems appear relatively simple, they make up for it in consistency. The first six measured virtually identically, so I have to give high marks to Aura for good quality control. I could have done without the “classical look” front mounted gasket, but overall these exhibit a very high value for the price. The tweeter: I needed a tweeter with a very high sensitivity to mate up with the multiple woofers, and in keeping with the high value design goal, choose the Vifa BC25SC06-04. This little horn loaded neodymium soft dome met all the requirements, and measures pretty decently as well. The horn loading helps with the power response around the crossover frequency.

Enclosure Design
Again considering portability issues of a mobile system, the test enclosures were built of void free 3/4″ birch plywood. Each pair of series woofers exist in their own sealed chamber with additional bracing to push the cabinet resonance higher in frequency. Even with the bracing, these enclosures are quite lively at high SPLs, and I suspect additional resolution and slightly better imaging could be provided by MDF construction, with its attendant weight penalty. A separate recess for the crossover is built into the upper back of the cabinet makes for ease of access and installation. While the tweeter probably could get by without being flush mounted, the woofers close proximity to the tweeter mandated their flush mounting, so all drivers were flush mounted.

Amplifier/Crossover Configuration
In keeping with the goals of this design, the crossover point was set higher than my normal propensity, with steep slopes. To keep the component count and costs down, the design is a 2.5-way. I looked into making it a 2.5.5 where the woofers furthest from the tweeter were rolled off more than the intermediate woofers, but I found no real advantage that would offset the additional cost of the components. Woofer topology: The two woofers flanking the tweeter are connected in series, as are the middle pair and the bottom pair. The three pair are then essentially paralleled. This results in a woofer system minimum impedance of about 5 ohms, and a gain in system sensitivity of almost 10 dB over a single driver for the same excitation voltage. The source signal is first fed through the common 2nd order electrical low pass filter consisting of L0011 and C0021. Additionally, a shunt resistor R0031 provides some response shaping, specifically ameliorating a small response peak around 2.5K. The low passed signal is then sent to the two woofers flanking the tweeter. This low passed signal is also sent to the lower quad of woofers through a series inductor which counteracts the woofers’ rising response up to the crossover frequency. The acoustic transfer function of the upper woofers resembles a 4th order LR crossed at 4 kHz, however the combined woofer response pulls the measured crossover point lower. Tweeter topology: A series attenuation resistor R4011 precedes a 2nd order electrical high pass filter, consisting of C4021 and L4031. The transfer function results in a low Q, 3rd order acoustic roll off at about 3.5 kHz. While I modeled a 4th order acoustic transfer function, which modeled slightly better, in the end the extra expense of the additional capacitor didn’t provide any useful sonic benefit. While I didn’t run any long term high power tests, I recommend R4011 should be at least capable of 20 watts of power dissipation.

Conclusion
Considering the goals of the design, and the relatively low cost of the drivers, this design offered surprisingly good performance, and comparing them to my reference system, they subjectively sound much louder than my best conservative estimate of 92 dB. Loud is useless without fidelity, so here’s what Wayne and I think of them: Surprisingly good midrange and treble for a high value design. The bass bump can make some male singers sound a bit chesty, but provides a more balanced voicing with most material. This last is sans sub or high pass filtering, which should ameliorate the issue. They have that “traditional paper” sound, which I suspect will find favor with many, and sound more rich than analytic. The little Vifa tweeter sounds surprisingly good. Considering its rock bottom pricing, you can afford to have a couple of spares on hand. But the real story is when you turn them up: at power and SPL levels where most speakers start to fall apart, these really start to come into their own, and retain their composure even at relatively high SPLs. I’ve pushed them for an extended time at an estimated 116 dB SPL / 1 meter with no audible increase in distortion. In fact, they tend to sound better and more cohesive at higher SPLs. They really shine reproducing all types of percussive transients as well as anything rock influenced. Extended listening at high SPLs did not result in any listening fatigue, which is a good indication the drivers are still working well within their mechanical and electrical limitations. These are not your stuffy audiophile speakers that only sound good at low levels, nor do they take hundreds of watts to get there. Don’t let the low cost of entry fool you: these are unapologetic, hard hitting, concert level rockers.