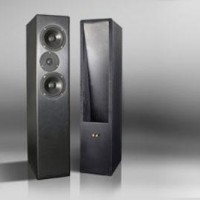 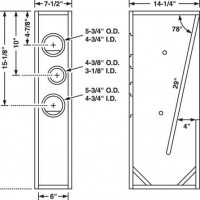 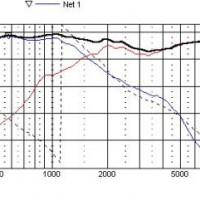 Driver Selection
The opportunity for an eight ohm MTM using Dayton Classic drivers was made possible when the DA130BS-4 was released. In my opinion, this four ohm version of the well respected 5-1/4″ Dayton Classic-like its eight ohm sibling-has the best midrange of the Dayton Classic lineup. In addition, the DA130BS-4 boasts a sensitivity 3 dB higher than the eight ohm version. Using two of these drivers in a series results in a system with sensitivity that rivals many four ohm designs, yet provides an easy load for impedance-challenged amplifiers. The DC28FS represents the latest version of this popular tweeter, and is arguably the best sounding version to date. It demonstrates a bit of a “BBC” dip around 4 kHz and exhibits a smoother top end than its predecessors. The woofer and tweeter are both shielded, and their acoustical abilities complement each other very well.

Enclosure Design
I’ve always found transmission lines intriguing, not only because of their attributes, but also because for so long their design was cloaked in mystery and conjecture, rules of thumb, and sometimes outright bunk. The recent works of Martin King and Augspurger, among others, have removed the veil on proper design-or at least made it somewhat more transparent. Although their design process can be tricky, transmission lines provide an alternative solution to some basic acoustical challenges. Half of a driver’s acoustic energy radiates from the back of the cone. In a sealed design, an attempt is made to dissipate this unwanted energy by absorbing it in stuffing, but in many cases a significant amount of energy reenters the cone- delayed in time, and revealed as response peaks due to internal standing waves. All of these effects cause distortion of the original signal. A transmission line functions by using this wasted and unwanted acoustic energy in a positive manner. By encouraging standing waves of a single low frequency, and providing an opening (or terminus) out of which these standing waves can escape, the bass response of the driver can be extended. At the same time, the transmission line reduces the energy that reenters the cone and causes distortion. I chose the classic tapered transmission line for the TriTrix design for its characteristic nearly linear impedance, uncolored sound, good bass extension, and simplicity of construction. One objective was to keep the enclosure volume as small and compact as possible. I used Martin King’s “Classic Transmission Line Enclosure Alignment Tables” to design the enclosure, and verified it using his MathCad computer models. A significant advantage of all the TriTrix designs is their relatively small enclosure volume requirement, no matter which version. For the sealed alternative, the external dimensions are a diminutive 20″ x 6-1/4″ x 8- 1/4″ deep, and the max SPL models at in excess of 104 dB. Likewise, the TriTrix in a vented enclosure also lends itself to smaller volume of 19 liters, with an f3 in the low to mid fifties and an f10 right at 40 Hz.

Amplifier/Crossover Configuration
Like many of my designs, this crossover is an exercise in simplicity. It almost turned out to be a four-element design, which actually modeled and measured better, but listening tests revealed sound quality inferior to the five-element design. Particular attention was paid to the vertical and horizontal off-axis response so that the design would work well when the drivers were oriented either vertically or horizontally. You will notice the on-axis response is somewhat a departure from my normal designs in that it exhibits a rather broad dip between roughly 2 kHz and 6 kHz. This is due to the response of the Dayton Classic tweeter, and compounded by the narrow 6-1/2″ baffle width. While this appears somewhat sub-optimal, in practice it sounds remarkably flat. Considering the crossover topology, I suspect the dip fills in off axis. The second order electrical filter of the woofer emulates a third order BW acoustical transfer function at 1200 Hz. The tweeter resembles, at least for a portion of the transition band, a fourth order LR at 1450 Hz. The impedance is quite high with a minimum of about seven ohms, and an average around eight ohms. Phase tracking is fairly good through the crossover region.

Enclosure Assembly
Many thanks to my good friend Wayne Wendel for constructing the gorgeous piano black finish enclosures. I am told the enclosures are simple to build and a pair can easily be made from a single sheet of 3/4″ MDF. To further dampen side panel resonance, two dowel type braces were added behind the drivers. The enclosure width is 7-1/2″ with a 3/8″ round-over on all sides. Height was arbitrarily limited to 36″ in keeping with the compact nature of the design, but could be easily modified to accommodate a range of optimum listening heights. The cabinet’s depth is 14-1/4″. Acoustic foam was applied to the enclosure above and behind the drivers. The crossover was attached on the angle of the fold directly below the terminus. I used polyfill to stuff the lines, but you can use fiberglass, Acousta StufT, or whatever strikes your fancy. I found that a light to medium fill behind the drivers and a medium to heavy fill from below the drivers to the terminus gave the best response for my preference in my own listening environment. Start out with moderate amounts of filling material per enclosure and stuff to taste.

Conclusion
When I finished the TriTrix, I was surprised how good $160 worth of drivers and crossover parts could sound. I’d recommend them for home theater use or for music reproduction on a budget. The speakers’ bass output is sufficient for most users to consider them “full range” for music applications. At a modeled max SPL of 104 dB, they can play quite loudly without obvious distortion setting in. They are just a bit forward when the listener is on-axis, due to the diffraction bump at around 2 kHz. This helps bring out the dialog for home theater work, but for music I prefer to listen to them slightly off-axis, which minimizes the effect.