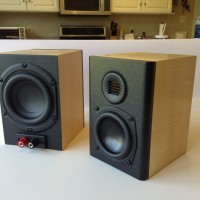 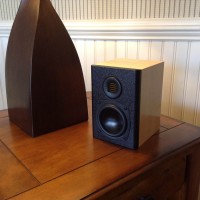 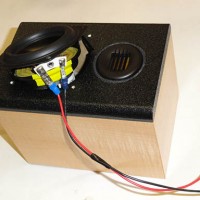 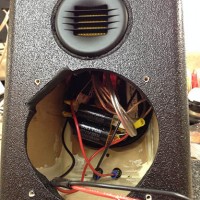 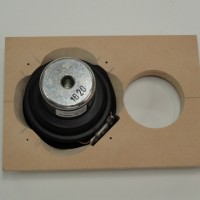 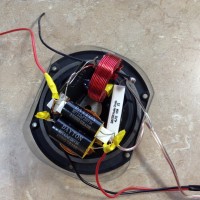 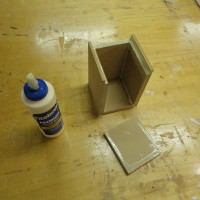 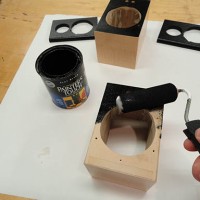 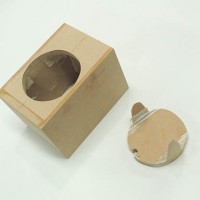 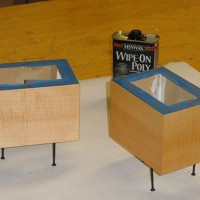 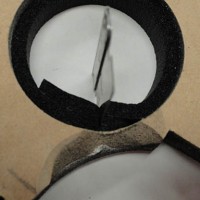 Project Description:
I would describe this system as a ‘micro’ speaker system without the ‘micro’ sound. It produces deeper bass and more detailed highs than most tiny speakers of this size. The idea for this speaker formed over time as I’ve begun to realize that I tend to listen more and more to smaller subwoofer/satellite systems as opposed to the larger, tower-type speakers that I’ve always associated with high quality sound. Although I’ve built many of the fantastic performing mini/small speaker designs that other folks from PE’s Tech Talk board have designed, I realized that I’ve never designed one myself, and thought it was time to give it a shot.

Design Goals:
My goal for this design was to create an extremely small speaker with reasonable bass output, as well as a nicely executed and sparkly top end. I also wanted to use one of PE’s Denovo brand pre-cut cabinets so anyone could easily build these. This design employs a Peerless 3.5″ passive radiator in lieu of a traditional vent. Using the passive radiator in this system had a few positive results. First, it allowed for a reasonably low tuning with a shallow roll-off in a box size that would have been difficult with a vent. Secondly, I was able to use the frame of the PR as a crossover mount, which simplified crossover assembly and mounting in such a tiny box. Although the passive radiator is small at 3.5″, it takes up almost all of the back of the enclosure, leaving room for only the smallest of binding post terminals.

Driver Selection:
Since I wanted this to be a miniature speaker, but also have a ‘higher end’ sound than you might normally see in this size, I went with the #290-224 Dayton Audio ND 91-4 woofer, and the #275-195 Dayton AMTPOD-4 tweeter pair — which is actually designed to be used in an automotive environment. These drivers are a bit more expensive than are normally used in micro speakers, but after listening to them for some time, I have to say that I feel the extra expense was worth it.

Enclosure Design:
Using the PE supplied Denovo .04 cubic foot knock-down boxes made assembly quick, and super-simple. They only go together one way so you can’t do it wrong, and the machining is so precise, the seams fit perfectly — even when just dry fitting the panels together. If you don’t have the tools to cut panels perfectly square, or just want to try an easier way to build a box for a change, these knock-down cabinets are top-notch. They even seem to use a nicer grade of MDF than what I can get locally.

Crossover Design:
The crossover uses 8 components, and they all fit nicely on the back of the passive radiator for convenience. I designed a second order crossover for the woofer with a response-shaping resistor in series with the coil. The tweeter filter is a third-order with two resistors for shaping and level-matching. I used hot glue and zip-ties to hold down the two inductors first and worked the rest of the components around them. With some fiddling, I was able to get everything wired point-to-point except for one ground jumper wire. The passive radiator has very good venting around it’s basket and installing the components on the basket frame did little to restrict airflow around the rear of the PR.
Knowing that placing air core inductors next to metal such as a PR frame would change their values, I tested the specs of the inductors with the DATS while mounted on the passive radiator to see if the changes in value were detrimental to the design. Though the two inductors are mounted close to each other and secured to a metal frame, I measured fairly minor changes in values… nothing that was a problem.
One note: The tweeter has no markings on the wire or driver itself to indicate what the polarity is. I assumed that the copper colored wire (as opposed to the silver colored wire) was the positive (+) lead and wired it up under that assumption. I may be wrong on that assumption, but either way, wire the copper colored line to the positive connection on the crossover as indicated in the schematic. I cut some of the wire off the tweeters built-in leads as they were longer than necessary.
The ND91 woofer is an amazing driver. It’s doing the majority of the work in this design as the crossover point lies somewhere between 6,500 and 7k Hz. It’s underhung voice coil and copper shorting ring keep distortion low, and it’s got huge excursion ability with a 25mm peak-to-peak swing to prevent damage on bass heavy passages. Looking at the passive radiator undulating massively during bass-heavy music, you start to get an idea of how a speaker this small can produce so much bass.
I was relieved as I listened to the completed speaker turning the volume up higher and higher…the tweeter didn’t sound stressed at all, even at loud volumes — and it maintains a clear presentation until the woofer finally does begin its rise in distortion and forces you to turn it down a bit.

Tips & Tricks:
I used a small 4″ x 4″ piece of denim insulation on the inside top of the cabinet. I ripped the piece of 2″ thick insulation apart to yield two approx. 1″ thick pieces, which I adhered to the inside of each cabinet with spray adhesive. I don’t know if this made much of a difference as I didn’t test its effectiveness, but hopefully it calms down any in-cabinet resonances a bit. If you left it out, however, it wouldn’t probably be an issue.
Since the speaker box is so small, there is little room for deviation on where most of the components are placed. The passive radiator and binding post terminal on the back need to be almost exactly where they are in order to fit, as well as to not have any screws being driven into the end grain of the 1/2″ thick MDF, which may cause a split in the wood. Measure carefully and dry fit/mock up the pieces before cutting anything. The notch for the woofers terminals is a good example of being very careful. It is easy to remove just a bit too much material, then you will have a gap to fill. It’s best to remove a bit at a time, then check fitment and repeat until it’s perfect.
Another tip is to make sure the tweeter and gasket are where you want them in the baffle before gluing the baffle to the box. As I said, I had to remount one tweeter after the baffles were glued to the box and it was much more difficult to do that way.
Since the woofer is so small the woofers terminals end up being very close to the driver frame, so I put a few pieces of electrical tape on the basket to guard against accidental short-outs in case the terminals get pressed into the basket when mounted.
Two things to look at when assembling the crossover; make sure the components are able to fit through the opening on the cabinet several times during assembly. Also, make sure nothing gets too close to the moving weight in the center of the passive radiator as you hot glue things together. It’s a good idea to make sure the components don’t touch the woofer magnet as well, though if you lay them out as I show in the pictures, there should be enough room. Look for this project on the ‘Speaker Project Gallery’ on PE’s ‘Tech Talk’ Forum for many more crossover assembly pictures.

Conclusion:
I think this is an exceptional sounding speaker, especially given its size. It can produce a good bit of bass thanks in part to the passive radiator, which in this design yielded an almost first order roll-off after the downward turn of the ‘knee’ on the low end. The AMT tweeter has a nice high end with a bit of sparkle to it which I really like. Many tiny speakers sound decent, but won’t play loud without distorting; the Bantams can play a fair bit louder that you would expect — and sound clean doing it. It doesn’t seem that such a big sound should be able to come from such a tiny speaker box — a testament to the quality designed into these two Dayton drivers.