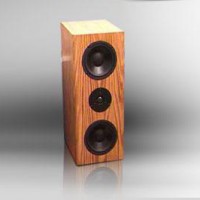 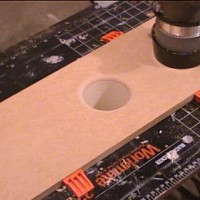 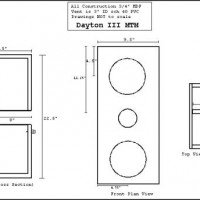 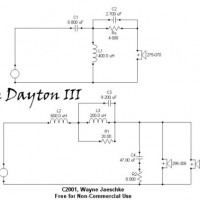 Driver Selection
The Dayton III is a 2-way, dual woofer loudspeaker using the Dayton 6-1/2″ paper cone woofer and 1-1/8″ silk dome tweeter. These drivers have been the subject of a lot of discussion on the Parts Express Tech Talk board because they are among the “best bang for the buck” in low price loudspeaker drivers. This woofer is able to produce exceptionally low bass for a given box size and the tweeter produces clean, clear highs. When you hear these speakers you won’t believe that the total cost for drivers and crossover components is under $150/PAIR! I decided to design a dual woofer speaker in an MTM configuration using these drivers because there have been a lot of requests from people to use my earlier designs with the Dayton speakers in this manner. For those of you new to building your own speakers, MTM refers to the front baffle configuration where you have the speakers arrangement comprising “midwoofer – tweeter – midwoofer”. This type of arrangement is widely accepted as having significant improvements over single woofer designs, at the expense of the larger cabinet size and (of course) the extra speakers. By using the Dayton drivers, this speaker has all of the advantages of a dual woofer design at a fraction of the cost of many high-end systems, but certainly provides an “introductory level” of audiophile quality sound.

Amplifier/Crossover Configuration
The crossover’s function in a loudspeaker is to “route” certain frequencies to the individual drivers and to “contour” the response of each driver to give the speaker a smooth, balanced output across the frequency spectrum. You don’t want to send deep bass to a tweeter and you don’t want your woofer trying to reproduce cymbal crashes. Accordingly, a properly designed crossover is the heart and soul of the loudspeaker. Using various methods, the designer can use the crossover to change most every aspect of how the speaker performs — where the soundstage is located, how deep the bass sounds, and many other things that all wrap-up into the final system. A good crossover can make inexpensive speakers sound great, while a poorly designed crossover can make hundreds of dollars worth of exotic European speakers sound terrible. To develop the most accurate and best sounding crossover possible, the CLIO measurement system and CALSOD loudspeaker design and simulation software package were used to develop “baseline” values from crossover components. Once an initial design was obtained, final “tuning” was done by hours of listening and by numerous, reliable ears. The final crossover employed uses a first-order electrical lowpass filter with impedance compensation and a “peak filter” to smooth the midrange response of the woofer. The highpass is a second order electrical filter with a “tilting” attenuation network to provide just enough tweeter padding to match the output of the woofer and a slight rolloff of the high frequency response to give the speakers a relaxed, yet detailed sound. Both drivers are connected with normal polarity. The in-phase crossover occurs at 2khz. All inductors are 18awg air core except the .60mH series inductor in the woofer crossover. That inductor is 14awg. The parasitic resistance (DCR) of the inductors is accounted for in the crossover design and helps shape the response of each driver. Avoid the temptation to use lower gauge inductors as some peaking the filter transfer functions will occur. All resistors are 10W, non-inductive wirewound. All caps are Dayton polypropylene with the exception of the 47uF cap in the lowpass — use a 47uF non-polar electrolytic cap bypassed with a 0.47uF film and foil bypass cap. All the parts are shown in the parts list here. Shown below are both the original crossover for this project and a revised version of the crossover (bottom) with modified component values to account for changes in the Dayton tweeter (relevant to units purchased beginning in July, 2001.) Please note that the currently available parts list is for the original crossover.

Enclosure Assembly
The enclosure for this design was optimized for the deepest bass response possible without sacrificing detail. The result was a 1.17 Cu. Ft (33L gross internal volume) ported cabinet tuned to 36.75 Hz. The final tuning frequency was slightly lower than my original design target of 39hz due to reduced driver dampening by using a 14awg inductor in the final crossover design. The sides are supported with a vertical brace that also supports the inner end of the 3″x8″ rear-firing vent. Vent openings should be slightly flared to smooth the airflow. Construction of the enclosure is quite easy and should take less than a day to cut and assemble the cabinets and baffles. All drivers are flush mounted. The vertical brace, not clearly shown in the diagram, is 8″x8″ with a hole in the center to support the vent. Speaker wire binding posts should be placed near the vent and the crossovers mounted on the rear baffle. Acoustic dampening foam should line the top, bottom, and sides of the enclosure. No foam is used on the rear baffle, but approximately 4 oz. of “AcoustaStuf” should be teased and placed in the rear half of each enclosure to slightly dampen the back wave of the woofer. To help you cut the baffles, I recommend the “Jasper Circle Jig” and the following dimensions: Woofer Cutout: 5 3/4″ Tweeter Cutout: 3 3/8″ Flush Mounting Recessions: Woofer: 3/8″ Radius rabbet, 3/8″ depth Tweeter: 1/2″ Radius rabbet, 3/16″ depth

Conclusion
This project has been exciting and challenging. The true test of an engineer is not how good he can build something, but how well he can use the available means to arrive at a product that exceeds the value of the sum of its’ parts. In this case, the final speaker sounds great, images well and provides an acceptable soundstage. Combining this with the fact that all the drivers and crossover components cost under $150, I believe that this project has been successful. I know that I’ll be enjoying my set for years to come and it will sit proudly among speakers in which a single tweeter costs as much as this whole pair.