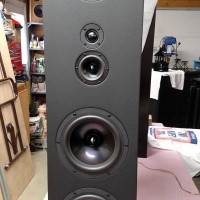 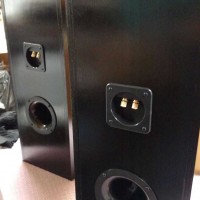 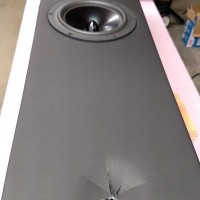 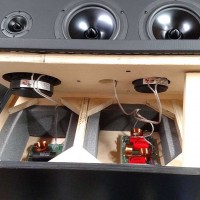 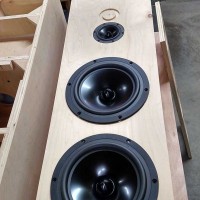 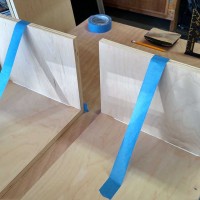 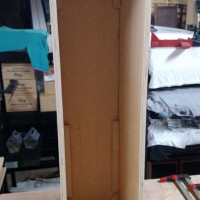 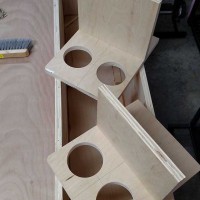 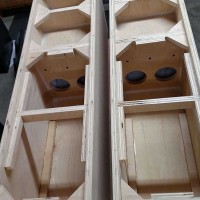 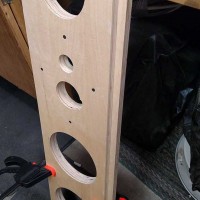 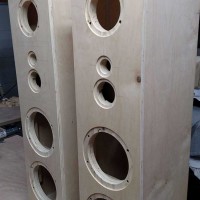 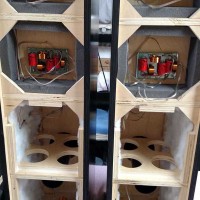 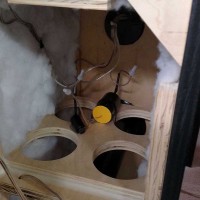 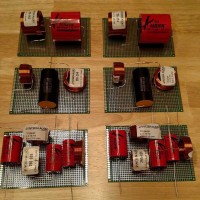 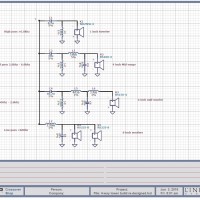 Design Goals:
There were two things I hoped to accomplish with this build. First, I wanted to build a pair of floor standing tower speakers utilizing all of the Dayton Audio drivers I purchased at the 2015 PE Midwest Audiofest. Second, I wanted to incorporate the suggestion that I received from the speaker competition judges on my first tower build which was to improve the cabinet astetics.

Enclosure Design:
To utilize all of the speakers, I chose a 4-way design with a 5 driver layout having a mid-woofer at the top followed by a tweeter, a mid-range and then dual woofers. For improving the cabinet, I used beveled joints at the top, not butt joints as I had in my first tower build.

Enclosure Assembly:
I used ¾” five ply walnut vineer plywood with cabinet dimensions of 40”H x 11”W x 14”D. I first ripped the plywood sheet on my table saw. Then, I used my radial arm saw to cut the cabinet pieces to the approximate lengths leaving some extra to be trimmed after I cut and dry fit the angles.

I cut the angles using the table saw. Wood glue was used to secure the sides and tops. I used painters tape to keep the pieces square while they dried. A tip for doing this: lay the top and side beveled edge pieces together flat. Place some painters tape along the edge where the two edges meet. Then apply the glue and fold the top up 45°. The tape acts as a hinge. Use a square to get the side perfect, then use tape to secure and let set until the glue dries.

Wood glue was used to assemble the sides and back. Using liquid nails, I installed battens to the inner seems to hold, seal and increase the cabinet strength. I also cut small triangular pieces and secured them in the corners for added strength. I added several more later after the mid-woofer and mid-range/tweeter compartments were completed. This provided additional strength to the enclosure and surface area for gluing the front baffle to the cabinet.

For the mid-woofer and mid-range/tweeter speakers, I created sealed upper compartments. The volume of these compartments did not require porting. Two large holes were cut in each of the lower portions of the compartment walls to allow the space behind them to become part of the volume for the woofers.

Before gluing into place, I lined the walls behind these holes with acoustic dampening polyfill. A brace was added in the woofer compartment connecting the cabinet side walls to further increase strength and to reduce cabinet vibrations. Additional triangle braces and battens were added for support and for gluing surface area of the front baffle. Note that the comparments and triangular support pieces were set 3/4” below the top of the sides to allow for flush mounting the double thick front baffle.

All of the speakers were flush mounted. I used the Jasper Circle Jig model 200 and a router for cutting the precision holes. Parts Express sells this jig and has a very good demonstration video of this jig in action on its web site. I carefully determine the layout of the drivers on the front baffle and after I made several practice cuts in scrap wood using the jig, I began cutting the holes. When cutting, be sure to allow for the speaker edge width and thickness as well as the depth. PE typically provides these dimensions in the speaker literature or you can usually find the specification drawings from the driver manufacturer linked within the PE e-catalog. I measured the actual speakers and looked at the specs, set the router bit accordingly and ran a few test cuts.

Since the baffles were double thickness, I had to cut holes in four pieces of wood, then secure the pieces together. This was done with wood glue and wood screws. Notice the inside baffle is set in ¾”. This area will be glued to the battens and triangular pieces making for a very strong and low vibration front baffle.

I covered the front baffles in a black vinyl imitation leather material, something that I had seen and liked on some high end speakers. I took into account the thickness of this covering material when cutting the speaker holes.

Due to the design being a 4-way and the cabinets having individual closed compartments, I determined it would be best to build the woofer and mid-woofer crossovers separately but combine the mid-range and tweeter crossover onto one board. Then mount each board in the individual compartments. I purchased some DIY FR4 pre-drilled circuit boards from Amazon. These worked as a perfect base for constructing the crossovers. Standard 16 gauge speaker wire was soldered to each of the driver connections on the crossover. For mounting the circuit boards, I used 1” wall anchors cut in half as standoffs and wood screws for mounting. Small holes were drilled for routing the wires to the upper compartments.

Acoustic dampening materials – Polyfill was stapled to the inside walls of the cabinet, the back of the driver baffle and inside the area behind the mid-woofer, midrange and tweeter enclosures before gluing and sealing those compartments. Fixed cell foam material was also added to the mid-woofer and midrange/tweeter compartments to further reduce and dampen unwanted low frequency vibrations.

Tuning Port – The tuning port is located on the back of the cabinet. Matt at PE calculated the port size. I provided him with the woofer cabinet volume and the part number of the woofers. Matt determined a 3 inch diameter 9.5 inch long flared port would provide a tuning frequency of 28 hertz.

Wood finish – I wanted the cabinets to be black. So, I applied two coats of black paint to the cabinets and a clear coat of Minwax polyurethane sealer a few days later.

Speaker installation, wiring and final assembly – The drivers were carefully positioned on each of the front baffles and pilot holes drilled for the screws. A hand screw driver was used to install the screws. More control of screw pressure is achieved by hand tightening vs using an electric drill. One slip with a drill driver and a speaker or the vinyl on the baffle could have been ruined. Each driver connection was soldered. Liquid Nails was used for gluing the baffles, side walls, back wall and all other support pieces. Ten large clamps were used to hold the units while the glue hardened. Custom made speaker spike support bars have been constructed but not yet installed.

Crossover Design:
For my first tower project, I had purchased a pre-assembled 3-way crossover. For this project, I wanted to design and build the crossover myself. Since these speakers will be used with a vintage stereo integrated amplifier without a subwoofer connection, the design is a 4-way.
I studied the spec sheets for all of the DA drivers I had purchased and I choose the following crossover points based on the frequency response for each driver:
• Woofer low pass <600hz
• Mid-woofer band pass 600hz – 2.6khz (originally was low pass ≤2.6khz but changed during listening tests)
• Midrange band pass 2.6khz – 6.0khz
• Tweeter high pass >6.0khz

I used several “freeware” and “app” crossover calculators as well as the Parts Express crossover tables to determine the crossover component values.

Conclusion:
I was very happy with the final product. The sound quality and bass greatly exceeded my expectations. On the construction end, the enclosures are very solid and cabinet astetics are much improved verses my first tower build (see “4 Driver, 3 – Way Floor Standing Tower Speaker” in the PE project gallery). The vinyl material on the front baffels provide a very nice and asteticly pleasing appearance. The black finish matches my other home theater components. Currently the speakers are connected to to a Russound two input, 6 speaker out speaker switch so I can run them through the vintage amp and my AV receiver.

About the Designer:
Since my teenage years, I have been interested in electronics, specifically stereo equipment, speakers, amps, etc. I still use my 1978 integrated amplifier as my primary audio source for playing CDs and vinyl. I like the simplicity of the vintage equipment along with the sound and build quality, real aluminum knobs, aluminum face plates, the feel of quality. The pursuit of better quality is what drove me to try my hand at building speakers. Thank you Parts Express for your support in this hobby.